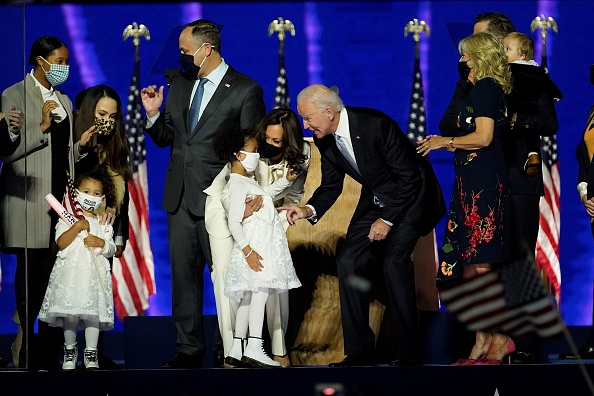 The Sights And Sounds in America On November 7th, 2020

Yesterday was an historic one with Joe Biden and Kamala Harris ending our four-year national nightmare. After it was made official, I’m sure that a lot of people just collapsed into relief. Still others went out and celebrated the victory, and it was genuinely like nothing I had ever seen. It was like the hometown baseball team won the World Series … in every single city in America. It was one of those kinds of days where Mariah Carey’s “All I Want for Christmas” can actually bring you to tears.

It was incredible. Those of you who spend much of your time online have probably seen a lot of these already, but some of these may be new to others. It was just a great day, and I wanted a place to share all of these so that we can one day look back and remember the sights and sounds around the nation on November 7th, 2020.

We did it, @JoeBiden. pic.twitter.com/oCgeylsjB4

.@JoeBiden and @KamalaHarris fist bump onstage after winning the election in Wilmington, DE on November 7. pic.twitter.com/CB0sFSQPh7

Okay this one got me 😭 pic.twitter.com/C0Cghj984f

Never has a GIF made me cry. Until tonight. [origin unknown] pic.twitter.com/Ud61wmy3jx

tbh this is the case if you walk down a street in DC at any time on any day pic.twitter.com/o5KlHBIy8Z

Don Lemon basically describing the last four years of my career as a Black gay journalist. People need to understand how so many of us are relieved that tyrant is about to be out of there. #Election2020 pic.twitter.com/WIovqzagWw

LMFAO A LITTLE ON THE NOSE, LA pic.twitter.com/BSauSFFJfi

A Native American dances in the street along with other individuals in Albuquerque NM pic.twitter.com/LeN7m9Ig89

Trump: The radical left is trying to destroy Christmas.

This video will never get old. https://t.co/wh2xzxAjyt


← What's Up with Alec Baldwin's 'You're Welcome' Sign on 'SNL'? | 5 Shows After Dark: 'NCIS: Los Angeles' Season 12 Premiere, 'By Whatever Means Necessary The Times of Godfather of Harlem' Premiere →