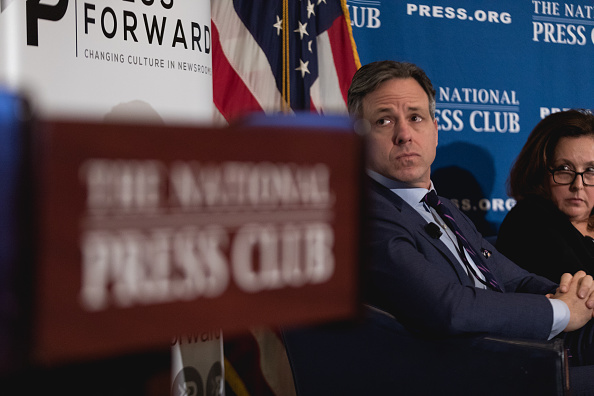 The Political Media Is Not Helping

Good morning. It is (*checks calendar*) Monday. It is April 13th, one month and two days since Tom-and-Rita Day. In that time, we have all dealt with an enormous amount of uncertainty, but we have occasionally been able to look to experts for comfort and a sense of stability. No one has taken on that role nationally more than Dr. Anthony Fauci, the likable, sober infectious disease expert who — when the President allows him to speak — offers the truth, which is honestly all that we can really ask of anyone these days.

Trump has grown increasingly irritated with Anthony Fauci for two reasons: 1) The truth doesn’t jibe with the President’s agenda — specifically, re-opening the country in 3 weeks — and 2) people like Fauci way more than Trump, and Trump doesn’t like it when Fauci gets more attention than him, especially when that attention comes by way of criticism of the President.

This is all coming to a head, because we have a feckless, thin-skinned idiot for a President, and also because the media has been dying to see this play out. Everyone in the media knows exactly what Anthony Fauci thinks of Donald Trump. The entire world knows what Anthony Fauci thinks of Donald Trump. Anthony Fauci rang the bell on this pandemic early on, and the President didn’t listen to him. If the President had listened, thousands of lives would be saved. But Fauci is honest to God trying to do what’s best for the country, which is to give us the truth while also trying to remain on the President’s good side by [pretending to give] him the benefit of the doubt. Fauci wants to keep his job, because his job is so important to our health.

But the press? They’re pushing Fauci, basically daring him to sh*t on the President, because we all need the clicks, because the ad rates are gone. And so, the media wants more than just another NYTimes investigation showing without any doubt whatsoever that Trump’s slow response to the pandemic led to the massive loss of life, the media wants the most trusted man in America right now to weigh in on that investigation and indict Trump for his failures.

Yesterday, Fauci begrudgingly provided the media the soundbite it wanted, telling Jake Tapper on CNN that yes, obviously, we could have saved more lives if the country had shut down earlier.

“I mean, obviously, you could logically say that if you had a process that was ongoing and you started mitigation earlier, you could have saved lives. Obviously, no one is going to deny that. But what goes into those decisions is complicated.”

“If we had right from the very beginning shut everything down, it may have been a little bit different. But there was a lot of pushback about shutting things down back then.”

Even here, however, even though he doesn’t mean it, Fauci begrudgingly gives Trump the benefit of the doubt (“there was a lot of pushback back then”), but all Trump hears is, “Obviously, you could logically say that,” because that’s what the media wants Trump to hear.

So, yesterday, as if on cue, Trump had his little Twitter meltdown, scapegoating everyone from China to the Democrats before retweeting a #FireFauci tweet.

The @nytimes story is a Fake, just like the “paper” itself. I was criticized for moving too fast when I issued the China Ban, long before most others wanted to do so. @SecAzar told me nothing until later, and Peter Navarro memo was same as Ban (see his statements). Fake News!

Sorry Fake News, it’s all on tape. I banned China long before people spoke up. Thank you @OANN https://t.co/d40JQkUZg5

And now, this morning, the media is screaming from the sidelines, “Fight! Fight! Fight!” And then there’s this tweet, which is basically the same tweet we’ve seen applied to a dozen Trump appointees, many of which are eventually pushed out or fired when Trump’s mood tilts.

“Trump remarked that he’s made Fauci a “star” and that barely anybody would have known who the doctor was were it not for the president putting him front and center in the administration’s coronavirus response, televised press briefings, and media strategy.” https://t.co/o7c9wYBwWW

Look: It’s “obviously” important to hold the President accountable for his failures. The NYTimes investigation (and the other half dozen investigations I’ve read) are crucial to understanding why and how we are in the dire predicament we are in. It’s also information voters will want to take in when considering their choices in November. And “obviously”, Anthony Fauci’s opinion is an important factor here.

But also, what’s playing out right here is not about accountability or blame. The political media is more interested in pitting a hero (Fauci) against a villain (Trump), which may provide a few more (mostly worthless) clicks, but it is decidedly not in the interest of our collective public health. Baiting Trump into firing Fauci, which seems almost inevitable at this point, will not make us safer.

There is no one to blame here but Trump, but good God, the political media is not helping. The investigative media, the scientific media, and those reporting on the ground are doing terrific work right now. But the POLITICAL media knows exactly how to inflame the tensions for clicks.

The upside here, I suppose, is that even if Trump does fire Fauci, he’s probably (hopefully) not going to go away (in fact, he may be even more vocal in his criticisms of the President and the direction he is taking us in). There are also CDC directors in most states (I assume) that provide crucial and valuable information. The CDC Director of Maine, Dr. Nirav Shah, in fact, has literally become a folk hero in these parts: There is a massive Facebook group devoted to him, hundreds of Nirav Shah T-shirts are being produced, and there’s a freeway sign now that says, “In Shah We Trust.” I hope you all have someone as competent and empathetic in your states.