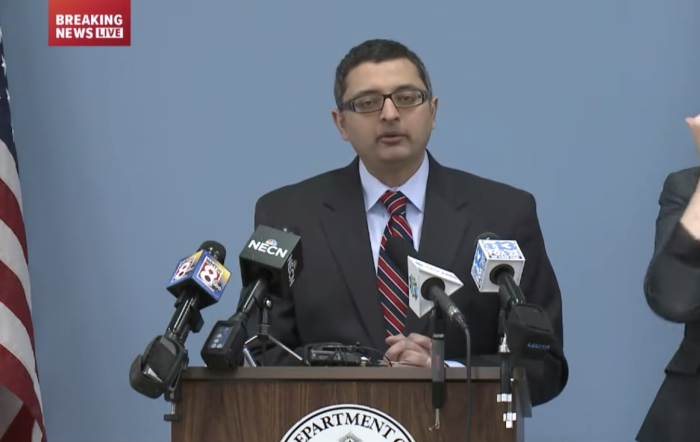 Tax payments will be suspended interest-free for 90s days, but you still need to file your taxes on time. Stocks are up. Markets will remain open, though reduced hours may be in our future. Lyft and Uber have suspended shared rides. The outgoing acting Chief of Staff, Mick Mulvaney is self-quarantining after his niece — who was also at Mar-a-Lago — fell ill. Voting for some goddamn reason continues in Arizona, Florida, and Illinois, though it has been suspended in Ohio. And Cats is available for digital purchase starting today.

When all of this is over — and one day, it will be over — there will be a lot of heroes to thank, and none of them wear capes. Some will be politicians, like Andrew Cuomo and Gavin Newsome, who are being hardasses in states that need hardasses. But instead of capes, a lot of our heroes will wear lab coats. It’s going to be the scientists who get us out of this mess. Here in Maine, we have a fine-enough Governor, Janet Mills, but the real hero is Dr. Nirav Shah, the Director of the Maine CDC, who looks a little like Mr. Bean, but who comes out every day for a press conference armed with hard facts and lots of advice. He reports the new cases and then reminds us all that behind every one of those cases is a person, a family member, a friend.

I also know that, for a lot of us, our anxieties are triggered by a lack of control, and this feels like something we cannot control, but Dr. Shah is here to remind us that it is our job to take control of our households. “Panic is a paralytic. It can cloud your mind and cause you to think about things that are not the priorities, such as making sure that you and your family are staying healthy, that you practice social distancing, and that you prepare to ensure that you have enough medicine on hand in the event that you or your family need to be quarantined.”

This feels manageable, like something we can control. And it feels much better to focus on that instead of the macabre end-of-world dystopian situations so many of us are conjuring in our minds. Keep yourself and your family healthy. We can do that! I love this guy. One day, they’re going to name a lot of buildings after him, and it’s going to be awesome and weird because I live in Maine and kids are going to end up going to Nirav Shah Elementary School.

In the meantime, our federal officials — with the exception of Dr. Fauci — are still mostly flailing. Today, Trump and his Task Force gathered in a number greater than 10 without social distancing. Steve Mnuchin said that Americans may receive checks in the following weeks, although he didn’t specify which Americans or how much those checks will be, only that they won’t go to people who make over $1 million. He did say the checks may be a bit bigger than what’s in the press, and I believe Mitt Romney has been calling for $1,000 per adult American, so a bit bigger than that?

That’s great! Suspending mortgage payments, like Italy has done, would be better! I’m not an economist, but wouldn’t it be cool if we could all just say, “Hey! The next six weeks don’t count!” But I guess life doesn’t work like that.

Meanwhile, in states where the outbreaks have hit the hardest, and in other states with Governors who are rightfully paranoid, like Ohio (where Mike DeWine, a Republican governor, is locking sh*t down despite only 30 cases), bars and restaurants have been shut down, save for delivery. Support those local establishments if you can, so that when this is over, they might be able to re-open. Also, West Virginia remains the only state without anyone who has tested positive. I wonder if that’s because they have only tested 75 people, so far? They desperately need their own Dr. Nirav Shah.

Finally, give me a break.

Pres Trump: "I've felt it was a pandemic before it was called a pandemic. All you had to do was look at other countries…I have always viewed it as very serious."

Note: Last month, Trump said reaction to coronavirus by some was "hoax" and the virus would be "disappear" soon.

Double give me a break, Dana Bash.

Dana Bash just called Trump's tone "remarkable" and the kind of leadership we need during a crisis and said his recent pivot was "pretty incredible." pic.twitter.com/kXx2Uv0L4m


← Marvel's 'Black Widow' Becomes the Latest Movie Release to Be Postponed Due to Coronavirus | Gov. Andrew Cuomo Arguing with Brother Chris on Live TV Over Who is Mom's Favorite is Perfection →