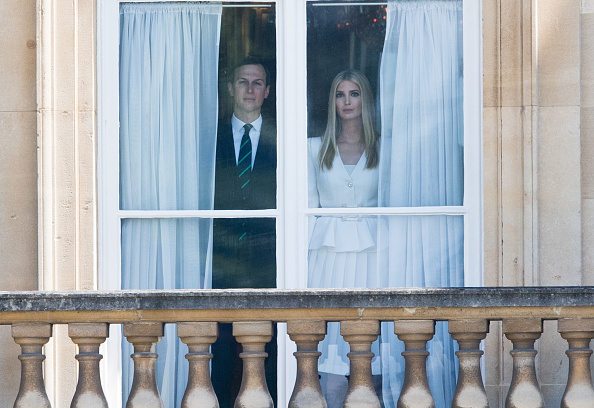 I realize that earlier today, I criticized our obsession with Trumpworld gossip and the dangers of Access Journalism, so writing about the Jared and Ivanka bathroom story may sound hypocritical. But listen: This is actually a surprisingly good, well-reported story that did not surface because its authors — Peter Jamison, Carol D. Leonnig, and Paul Schwartzman — had to trade favors with political leaders. It’s also a story that shows you exactly what kind of people Jared Kushner and Ivanka Trump are without the need for a bunch of anonymous sources dropping petty insults.
This is genuinely good journalism.If you haven’t read it yet, The Washington Post ran a story earlier today about how the Secret Service on Jared and Ivanka’s detail spends $3,000 a month (and over $140,000 to date) for access to a bathroom.
Why?
Because Jared and Ivanka won’t let them use any of the 6.5 bathrooms in their home, so they have had to resort to renting out a small basement unit across the street so that they have access to the toilet.

Before they found the unit, however, the Secret Service detail had to get creative.

Instructed not to use any of the half-dozen bathrooms inside the couple’s house, the Secret Service detail assigned to President Trump’s daughter and son-in-law spent months searching for a reliable restroom to use on the job, according to neighbors and law enforcement officials. After resorting to a porta-potty, as well as bathrooms at the nearby home of former president Barack Obama and the not-so-nearby residence of Vice President Pence, the agents finally found a toilet to call their own.

Unfortunately, the Obamas had to ban the Secret Service agents because, uh, someone left a “mess.”

The porta-potty was the agency’s initial solution to the protective detail’s dilemma, but it was removed in the face of the neighborhood’s protests. After that, according to the law enforcement officials, the agents began using a bathroom in a garage at the Obamas’ house, which the former president’s protective detail had turned into a command post.

The Obamas did not use the garage, so the extra traffic to and from the command post caused no problem. Yet this solution, too, was short-lived after a Secret Service supervisor from the Trump/Kushner detail left an unpleasant mess in the Obama bathroom at some point before the fall of 2017, according to a person briefed on the event. That prompted the leaders of the Obama detail to ban the agents up the street from ever returning.

I don’t even want to know.

In any respect, it’s a gem of a story because of what it says about what kind of people Jared and Ivanka are, what kind of people the Obamas are, and it also provides us all with a glimpse into the apparently expensive minutia involved in the day-to-day logistics of a Secret Service agent.

It’s also interesting that the piece would surface now, six days before the end of Trump’s term. The adult children of former presidents do not get Secret Service detail after the president’s term ends, so the fact that this story is leaking now also seems to suggest to us what the Secret Service members actually think of Jared and Ivanka.