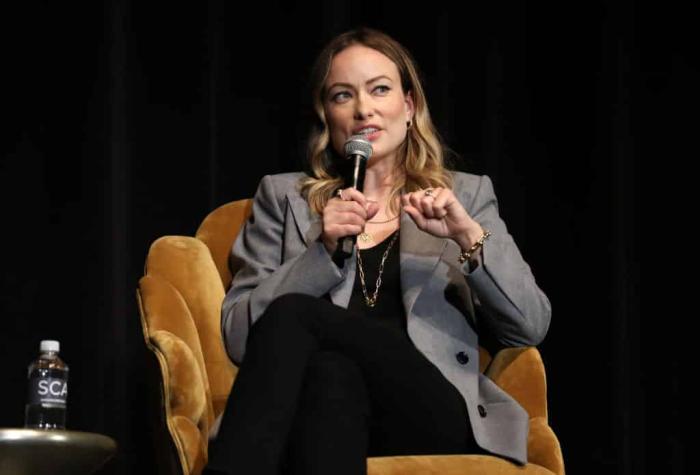 In 2019, Olivia Wilde made her directorial debut with the acclaimed comedy Booksmart. She cited her background as an actress for helping her to cultivate an atmosphere of collaboration and inclusivity on-set. In an interview with Total Film, she explained her approach to running a set:

‘We only had 26 days [to shoot], and I told everyone beforehand, ‘We have a strict no-asshole policy. And we’re going to have a lot of fun. But what I ask of you is 100%.’ I told everybody to be off-book [no scripts while filming] and people really enjoyed being asked to rise to their potential.’

Wilde implemented her no a-holes policy with her current project, the thriller Don’t Worry Darling, when she fired Shia LaBeouf from his leading role and replaced him with Harry Styles. As detailed in a report by Variety, LaBeouf ‘displayed poor behavior and his style clashed with the cast and crew.’ Ultimately, he was ‘off-putting’ enough to be sacked. A few weeks later, LaBeouf’s ex-girlfriend, musician FKA Twigs, would file a lawsuit against him alleging sexual battery. While this revelation was shocking to many, it wasn’t surprising to most of us due to LaBeouf’s extensively documented past of violence, on-set dramas, and aggression towards practically anyone in his close vicinity. His redemption arc was so effective that the industry chose to embrace his violent nature as a worthy means to an end, regardless of the trauma it caused. Wide said now. She is, unfortunately, an exception to the rule, but she doesn’t have to be. Let us commit, in 2021, to a universal No A**holes rule, not just in the entertainment industry, but in general!

It’s tough to fully gauge the change that the entertainment world has undergone over the past few years, following the revelations of systemic abuse and the arrest of Harvey Weinstein that helped to push the #MeToo movement into the mainstream. Talk of revolution was inescapable, and it felt like we may see a long-overdue and fully radical shift in professional, cultural, and personal approaches to rape culture, workplace harassment, and Hollywood’s decades-long smudging of the truth. The myths of the casting couch and widely accepted archetypes like the boorish executive with wandering hands were smashed to pieces and done so in the public eye in a way that wholly denied them plausible deniability or the shield of wilful ignorance. A brighter future was promised, but even at our most wide-eyed and optimistic, it never felt like a guarantee. It felt like change in a more long-term and crucial manner wouldn’t see the light of day, not when so many of the most fetishized aspects of the entertainment world are rooted in the deification of bad behavior.

Take a gander at LaBeouf’s career to see what I mean. Hell, look at a decent chunk of white American men who are celebrated as brilliant method actors for further proof. You’ll find endless laughable yet horrible tales of ridiculous attitudes, ludicrous acts, and occasionally terrifying moments of physical and mental pain, all in the name of ‘getting into character.’ It’s almost astounding how regularly dragged out this shtick is, and how ridiculously effective it continues to be within the industry and media reporting on it. LaBeouf was no stranger to this. Look at the stories surrounding productions like Fury, where he bragged about ‘preparing’ for the role by cutting his face while his co-stars watched, refusing to shower for weeks, having a tooth removed, and getting into fights with director David Ayer on an almost daily basis. LaBeouf later spun this into talk-show jokes when he appeared on Jimmy Kimmel, where he also admitted to patting Alan Cumming’s backside during a performance of Cabaret on Broadway because ‘he’s seducing me.’ This is the a-hole cycle in action: treat people like dirt, excuse it as intense actorly preparation, then make a big joke out of it during your promotional duties that make you seem more self-aware than you actually are (all while forcing your affected co-stars into a position where they have to laugh along with it.)

In the lawsuit filed by Twigs, she alleges that LaBeouf bragged about killing stray dogs to get into character for The Tax Collector.

Our culture is built on the falsehood that ‘genius’ should be embraced at all costs. Of course, our definition of ‘genius’ is highly elastic and is seemingly employed mostly to defend mediocrity from straight white dudes whose egos outsize their abilities. Then again, it really doesn’t matter how talented one truly is; there’s no excuse for harassing, hurting, and terrorizing those around you in the name of art. Whether it’s directors who famously can’t keep their tempers in line, executives who see vulnerable young people as their chew-toys, or actors claiming that casual harassment is part of their ‘method’, it feels as though Hollywood was built mostly as an excuse to abuse. Frankly, decades of history make that assertion hard to deny.

And yet we still center the abusers first. So many of the conversations surrounding LaBeouf, for instance, speculate on how being accused of domestic abuse by his ex-girlfriend may impact his career. His potential as an actor (and, by implication, his potential to cause further damage to those around him in and outside of the business) is prized above the mental and physical wellbeing of his many accusers. This is the inevitable endgame of a pro-a**hole industry.

This is why we need to adopt a stringent no a**holes policy across the board, and why the entertainment industry doing so is part of establishing a wider precedent. This behavior is never worth it and it’s painfully toxic for it to be endlessly held up as admirable, or, at the very least, a thing we just deal with. Maybe not every a-hole actor or director ends up becoming Harvey Weinstein or Shia LaBeouf but too many of them do, and the ones that don’t just make it easier for other abusers and bullies to thrive. Art doesn’t need them. Shock horror, good people make great movies too.