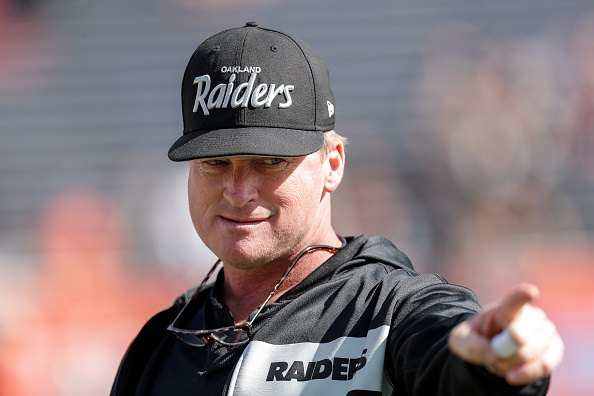 Oakland Las Vegas Raiders coach Jon Gruden resigned last night in the fourth year of a 10-year, $100 million contract after emails he had written from 2011 until 2018 surfaced, which included a lot of homophobic, racist, transphobic, and misogynistic language.

"I have resigned as Head Coach of the Las Vegas Raiders. I love the Raiders and do not want to be a distraction. Thank you to all the players, coaches, staff, and fans of Raider Nation. I’m sorry, I never meant to hurt anyone."

Gruden called the NFL Commissioner Roger Goodell a “fa**ot,” and “clueless anti football pu**y,” and took issue with the league purportedly pressing another coach to draft a gay player, writing that Jeff Fisher should not have to draft “queers.” He bashed President Obama and called Biden a “nervous clueless pu**y” and he said that the head of the NFL Players Association, DeMaurice Smith, has “lips the size of michellin tires.”

Gruden, however, maintained that he doesn’t have a “blade of racism in me.”

The emails were uncovered as a part of an investigation into the sexist culture of the Washington Football Team, and Gruden’s emails were between him and Bruce Allen, a close friend and the former president of Washington (unsurprisingly, Gruden also took issue with the decision to change that team name). Other business executives affiliated with the NFL were often included in the emails, and most of these emails were sent while Gruden was working as an analyst for ESPN. (Dan Snyder, the owner of the Washington Football Team who fostered the culture of sexism that’s being investigated, still has his job, by the way, because owners are untouchable).

Being a fan of the NFL requires putting on blinders to a certain extent. In fact, you should never follow your favorite player on social media or listen to him in interviews unless your favorite player is former Vikings punter Chris Cluwe. Gruden might be one of the worst offenders when it comes to racism, misogyny, and homophobia, but he is part of the NFL culture. That’s abundantly clear in some of the other people associated with the NFL and certain players coming to Gruden’s defense (Tony Dungy, Mike Tirico, former player Tim Brown, etc.). I’m sure that there are dozens and dozens of coaches and executives purging their email accounts this morning, and that Roger Goodell is probably trying to prevent any other email accounts from becoming ensnared in this because it’d probably cost the NFL half their coaches. And Cole Beasley.

If you spent any time on Twitter this morning (advice: Don’t), you’ll also see a lot of right-wing bigots defending him, weirdly comparing his emails to Hillary Clinton’s (or Hunter Biden), and even Joy Reid is getting pulled into this.

This is the end of Gruden in football (at least until someone offers him a contract as an announcer and offers him redemption), but I am guessing that he won’t be the last to lose his job. The NFL is a good ole boys club — rotten to its goddamn core — and that club includes a lot more than Gruden and Bruce Allen. In fact, I wouldn’t be surprised if Gruden — who probably has hundreds of reply emails from the people of power who forced him out — doesn’t selectively leak a few of those to the press, too. It’s going to be a long season.