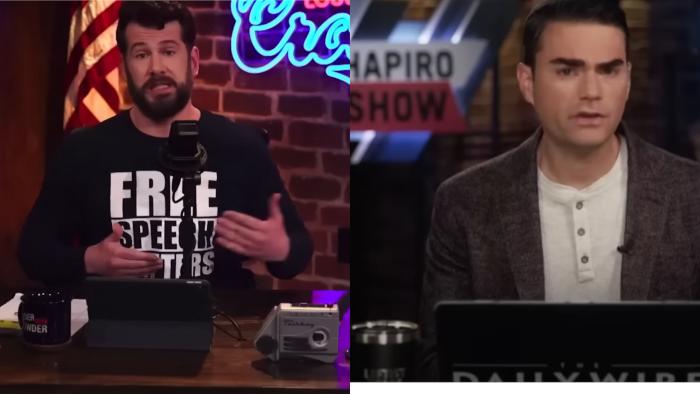 The Ben Shapiro and Steven Crowder Feud Has Been Revealing

If you didn’t know him before, I regret to inform you that Steven Crowder is one of the most popular far-right podcasters and YouTube streamers. A failed child actor, his schtick is all about presenting himself as the all-American, hyper-macho, bro-bully, who is convinced he is the funniest and smartest guy in the room. If you can think of something anti-intellectual, homophobic, racist or sexist, Crowder has done and said that, usually through attempts at comedy currently listed in the Geneva Convention as forms of torture. His hatefulness is such that he, somehow, managed to get demonetized and suspended on a regular basis by YouTube (who will usually turn a blind eye to whatever you do if you make them enough money, unless you’re trying to educate people). In his podcast, he loves wearing very tight shirts and a holster with a loaded gun, or as Emma Vigeland called it, his safety blankie.

This is the person to whom The Daily Wire, fronted by Itsy Bitsy Teeny Weenie Sellout Fascist Ben Shapiro, decided to offer $50 million dollars for an exclusivity contract (Crowder is currently signed with Glenn Beck’s The Blaze). Now, if the previous sentence infuriates you into … ahem, doing some direct actions, let me state here that I do not condone that, I do not excuse that, but I understand it.

That wasn’t enough for Crowder. It wasn’t enough to make just as much as a late-night TV host. Not because he thought he was worth more, according to him, but because that contract would see his free speech curtailed and his political ideals compromised.

By “political ideals” and “freedom of speech,” of course, we are talking about the freedom to say the most disgustingly racist things, including hard-Rs and hard-Fs, even at the cost of The Daily Wire’s YouTube channel being suspended or demonetized.

On January 18th, in a more somber tone than usual for his livestream, Crowder railed against a “certain conservative media outlet” that had offered him an unfair and exploitative contract, actually calling it “wage slavery.” In the stream, he claimed that said conservative outlet (that could only be The Daily Wire) was beholden to Big Tech, only because the contract stipulated a fee deduction if he caused the unnamed outlet to receive a strike or suspension, something inevitable if you’re willing to hire him. But for Crowder, that was the proof he needed to unmask every other conservative outlet (but his) as … Big Cons. Don’t expect originality from him, he’s just trying to sell his audience on the fash version of Twitch.

Notice that during that livestream, he wasn’t wearing his comfort gun and holster, probably because he would start shooting it in anger.

The Daily Wire’s cofounder, Jeremy Boreing, countered almost immediately with a video full of pettiness and passive aggression, arguing that Crowder wanted Joe Rogan money, was aggressive in his demands, and that his success is about as organic as the diet of a Wisconsinite.

An even more outraged Crowder (still not wearing his comfort gun) countered with a brand-new argument: he was just trying to get a good deal for future fash YouTubers! He claimed to be offended that these people would make it all about the money, and not about the principle. If that sounds to you like an antisemitic dog-whistle, I mean, you can see in Crowder’s face that he was trying his hardest not to drop a certain antisemitic slur. Later, he played a telephone conversation between him and Boreing, recorded without authorization. The legality of that differs according to state laws, but with guys this good at snitching, they wouldn’t make a day in prison.

OK, that was a low blow, mocking Shapiro’s way of speaking. But low blows are how you can hit him BOOOM.

Itsy Bitsy Teeny Weenie Women-Drying Ben Shapiro was LIVID, furious at the betrayal. Confirming that Crowder had indeed been offered $50 million, he called him a traitor, a disservice to “the movement” and, in passive-aggressive terms, a fucking idiot who should not be in charge of managing his own business. On this last point … goddammit, he would be right. Meanwhile, Candace Owens, never one to miss the opportunity to simp, called this a b*tch move on Crowder’s part … which is also true. Goddammit, cue the meme! 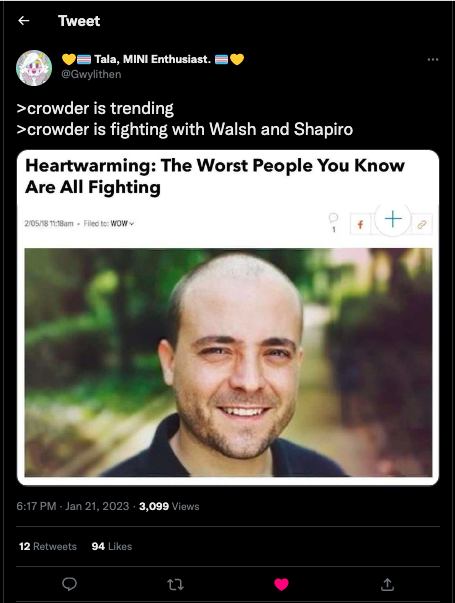 Enjoy yourself, and let’s all pray to Good, Semi-Mighty Liberation Theology Jesus that this civil war goes on and turns ugly. If anything, it might be a preview of the one between the former guy and the Florida man. If you’re interested in stoking the fires by, say, creating fake accounts supporting one side or the other, meet me in my DMs.

In the embedded videos, Sam Seder and Hasan Piker make a great point, one which Boreing unwittingly exposed when shading Crowder: The entire internet fascistphere has been an astroturf job funded by billionaires we’re long familiar with, like the Koch brothers, plus newer ones like the fanatical Wilks brothers. None of these outlets are that profitable, but what are $50 million dollars to these people? Every penny they spend on disinformation is money they’ll recover, either via tax cuts, a few more years of keeping the Red States hooked on gas-guzzlers, or they can just write-off it off as deductibles.

Is there a lesson for The Left here? Yes! We always complain that we don’t have enough funding to compete with fascist astroturfing. We barely have sympathetic millionaires, let alone billionaires, and they might only sympathize with some of our ideals. But we have one major leg-up: We are cheap. We don’t need millions of dollars, even a six-figure salary terrifies us that it will turn us into sell-outs. Pay us a livable, fair wage, benefits and allow us to unionize, and it’s all we need to devote our entire energies to the billionaire idiots that are ruining everything for everyone. So, Mr. Soros, if you happen to be reading, you can have us for a twent.. a tenth of what The Daily Wire was willing to spend on Crowder.

Alberto Cox would like to clarify to Mr. Soros that his wages should be a tad higher, given how everything is absurdly expensive in Chile.


← 'Accused' Is Fox's Hugely Popular New Series, But Is It Any Good? | 5 Shows After Dark: 'Leverage: Redemption' Second season finale on FreeVee, 'The Real Housewives of Salt Lake City: Reunion' on Bravo →


Image sources (in order of posting): Shapiro and Crowder's YouTube Channels I guess, Yuck
Most Viewed