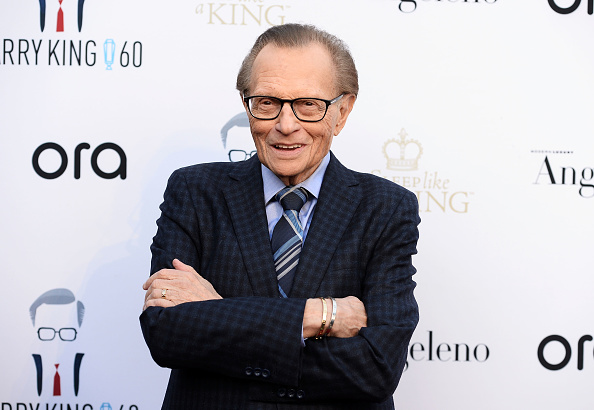 Larry King passed away this morning. He had a very long career and had been battling health problems basically since the 1980s, including COVID-19 just last month. He had also been married 8 times. He was 87. Piers Morgan picked a strange way to honor the legendary broadcaster this morning.

Larry King was a hero of mine until we fell out after I replaced him at CNN & he said my show was ‘like watching your mother-in-law go over a cliff in your new Bentley.’ (He married 8 times so a mother-in-law expert) But he was a brilliant broadcaster & masterful TV interviewer. pic.twitter.com/1JsXeeZYEk

This is less about King and more about Debbie Reynolds, but wow!

Meanwhile, in news of the political variety, we haven’t heard anything out of Trump since he left the White House (a petty bitch until the very end), although it looks like his impeachment trial will begin on February 8th. That’s two weeks from Monday, so it’s not actually a very long time in the political world.

In the meantime, every day seems to bring something new to light about the Capital insurrection. For instance, according to Bloomberg, Trump’s campaign paid more than $2.7 million to individuals and firms that organized the Jan. 6 rally that led to the insurrection.

Elsewhere, this sounds real bad: Jeffrey Clark, an “unassuming” DOJ attorney, devised a plan with Trump to oust Jeffrey A. Rosen as acting attorney general in order to take over the DOJ and force Georgia state lawmakers to overturn its presidential election results. The plan backfired because in a conference call among DOJ officials they all agreed that they would resign if Clark took over. Before that happened, however, Clark and Rosen made their respective cases to the President. From the NYTimes:

Mr. Trump’s decision came only after Mr. Rosen and Mr. Clark made their competing cases to him in a bizarre White House meeting that two officials compared with an episode of Mr. Trump’s reality show “The Apprentice,” albeit one that could prompt a constitutional crisis.

First, this story is utterly insane.

Second, if this kind of plotting was happening at DOJ, it was surely happening elsewhere, too.

We still have no idea just how much impeachable misconduct Trump committed in the past few weeks — let alone the past four years. https://t.co/ndQUgvvyF8

Not for nothing, but as NY Attorney General Letitia James zeroes in on Donald Trump and his businesses in New York, Morgan Lewis & Bockius — the firm that handled Trump’s tax affairs — has bailed on the former President.

Finally, I leave you with this just to get that heart-rate up this morning.

A word on this debate over whether conservative women are “hotter.” The answer is definitely yes, but not for the reason you think. It’s because conservative women VALUE our femininity and our immutable differences. We aren’t TRYING to be men. God made us WOMEN. Go us and go men! https://t.co/XGsrr9ljHH

← 'Losing Alice' on Apple TV+ is a Sexy, Psychological Chore | Review: 'Everyone is Doing Great' is a 'One Tree Hill' Reunion Doing Its Best 'Party Down' Imitation →