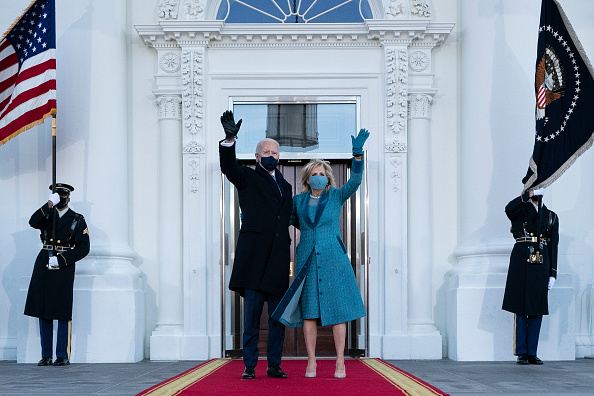 He Was a Petty B*tch Until The Final Minutes

You may have heard that Joe and Jill Biden experienced a little bit of awkwardness after the Inauguration when they returned to the White House for the first time as occupants and the doors were … not open. Here’s how the NYTimes put it yesterday:

It was the culminating moment of a transfer of power: President Biden and the first lady, Jill Biden, walked up the driveway to their new home on Wednesday, ascended the steps to the North Portico, waved to the crowd as a military band played “Hail to the Chief,” turned to head inside — and came face-to-face with a closed door. As the world watched and a small crowd of Biden family members came up behind them, the first couple waited.

It wasn’t a long wait — about ten seconds — but it was an awkward one, and broke with protocol. As it turns out, it was the jobs of the butlers to open the door for Joe Biden, and for the Chief Usher to manage the logistics. However, the Chief Usher had been fired at 11:30 a.m.

For one, there was no chief usher to greet the Bidens when they arrived. Although it is unclear exactly what caused the delay with the doors — which are normally opened by Marine guards — the chief usher of the White House, who manages the residence, had been fired less than five hours earlier. Timothy Harleth, the Trumps’ chief usher and a former rooms manager of the Trump International Hotel in Washington, was busy moving furniture on Inauguration Day when he was told at 11:30 a.m. that his services were no longer needed, people familiar with the process said.

A lot of people blamed the Bidens for the firing of Harleth, who admittedly probably would have eventually been fired, even though he was eager to stay on. He is a long-time Trump loyalist, and I’m sure the Bidens wouldn’t have felt comfortable with him. Still, it wasn’t Biden who fired him. Biden wasn’t even President until noon that day.

It was Trump. And not only did he fire Harleth 30 minutes before Biden was set to officially take occupancy of the White House, but Trump also sent all the butlers home before he left that morning. From the National Journal:

“The Trumps sent the butlers home when they left so there would be no one to help the Bidens when they arrived,” a well-placed official not associated with the incoming Biden team told National Journal. “So petty.”

He was a terrible human being until the bitter f**ing end.

On the other hand, it’s been over 48 hours now since any of us have heard a peep out of him. It may be the most peaceful two days in America since June 2015.


← Review: 'Spoor' Delivers A Revenge Thriller For Animal Lovers | HBO is Really Hoping You Still Care About 'Game of Thrones' →