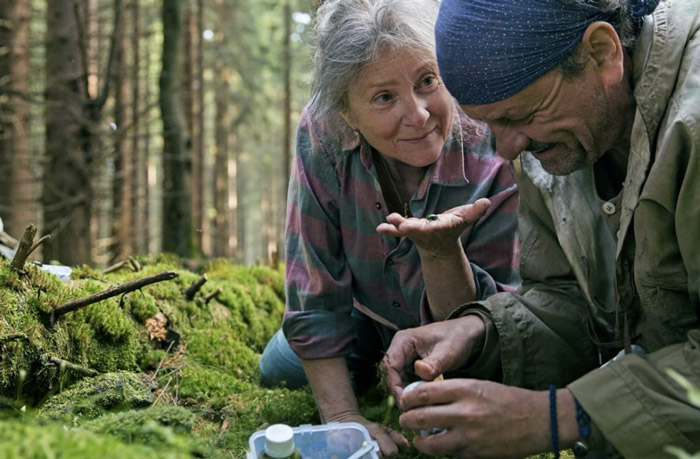 A killer stalks the woods of Poland’s Klodzko Valley. That’s nothing new. This rural community is full of killers, though they prefer the term “hunter.” The men of this cozy village relish the chance to fire away at deer, boar, and foxes, seasons and regulations be damned. But now, something in the woods is fighting back, leaving a trail of bodies, surrounded by evidence that suggests a feral murderer.

Adapted from Olga Tokarczuk’s novel Drive Your Plow Over the Bones of the Dead, Spoor (A.K.A. Pokot) follows this curious case of serial killings by centering on a local astrology enthusiast and animal lover, who is the first to point the finger at Mother Nature. Janina Duszejko (Agnieszka Mandat) is an eldery eccentric who lives with her two beloved dogs in the thick of the woods. There, she embraces the fresh air, the glittering sunrise, and all of her wild neighbors. Well, except for Big Foot, the hunter nearby. She’s called the cops on his poaching to no avail. The cops don’t care about the deaths of her furry friends. Their tune changes when one hunter after another turns up dead. Duszejko believes nature is striking back at these vicious men, and she’ll lay out star charts as evidence to anyone who will listen. No one will. More will die.

Over the months—marked by title cards that proclaim starkly what game is in season—Duszejko fails to convince her human neighbors to give up their violent sport. However, she knits a close circle of friends from local misfits, including a sheepish techie (Jakub Gierszal), a big-hearted shop girl (Patricia Volny), a passionate entomologist (Miroslav Krobot), and an enigmatic admirer (Wiktor Zborowski). Amid the grisly gore of the discovered corpses and the terror sparked from footage of animals fleeing from the ruthless bark of gun fire, director Agnieszka Holland carves out a quirky yet poignant tale about finding your pack. She invites audiences into the fold with a dreamy atmosphere that ushers us into Duszejko’s perspective.

Despite the title cards that mark time passing, there’s a slipperiness to the way events unfold. It’s almost like a dream, where time leaps and we’re too engaged in the mood to take much notice. The intensity Duszejko feels about her activism for animal rights and her antipathy for the hunters is exhibited in grotesque close-ups. As these menacing men bellow at her, the full frame of the film is filled by their scowling, spittle-flecked lips. It’s as if their maws might not only bellow at us, but also gobble us whole. As the body count stacks up, so too does Spoor’s style. A bird plucking up a burning ember sparks the whole sky clicking over to a blood-red, a warning that urges Duszejko to rush home.

Mandat is a spectacular center to this surreal story. She grounds the world with her staunch physicality, marching through the woods as if they are her intended terrain. Her face, streaked with wrinkles, reflects warmth to the town’s outcasts, but ferocity to the hunters who bark and howl at her. When she spins into her critter conspiracy theory, the concept may sound impossible, yet her passion prickles credulity. In short, Mandat and Holland craft a fascinating heroine, who we eagerly follow, babes in the woods hunkered behind a queen of the wild.

Bolstered by an incredible cast that bleeds viciousness and vulnerability as needed, Spoor is a crime-thriller that sparks with violence and toxic masculinity, yet has a radiant heart thumping at its core. Holland uses the murder mystery as the lure, but the hook is the tender tale of friendship among misfits. This peculiar collision makes for an explosive finale, alive with twists, compassion, and action. Thus, Spoor proves spooky, surprisingly sweet, and strangely satisfying.

Spoor is available on VOD on January 22.