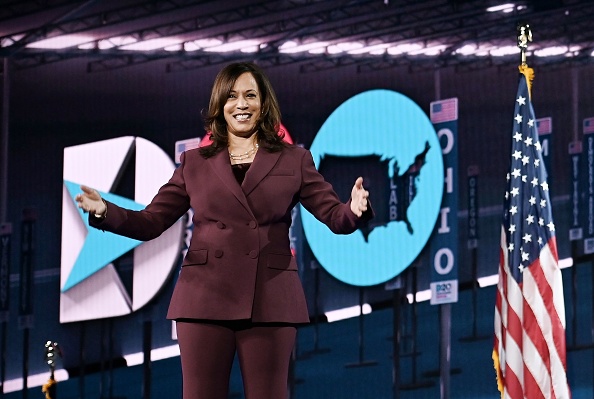 On Night 3 of the DNC, Obama Scorches Trump and Kamala Wins Over A Lot of 'Chithis'

Now, last night, that felt like a Democratic National Convention. Virtual or not, it was a terrific night, one that left me giddy about waking up and writing about it. I don’t know when the last time was that I went to bed giddy to wake up and write about politics. I haven’t felt that energized by a political event since the 2012 DNC, maybe not even since 2008.

That happens when the Democrats put people on stage we’re proud to support, namely Elizabeth Warren, Barack Obama, and Kamala Harris, representing my two top choices this year and, of course, the all-time “My President.” Hillary was there, too, and she did a fine job, too, although her speech could’ve just been four words: “I told you so.”

Hillary Clinton: "Don't forget: Joe and Kamala can win by 3 million more votes and still lose. Take it from me."

Elizabeth Warren gave a great speech, too, but what everyone was talking about was that Easter egg she dropped in the background.

Still loving the fact that @SenWarren had the letters BLM on the shelf behind her during her Convention speech last night pic.twitter.com/d13taZGE7y

Barack Obama, meanwhile, gave a scorcher of a speech.

Barack Obama said President Donald Trump has failed to grow into the job and has only used the 'awesome power' of the presidency to help himself and his friends #DNC2020 https://t.co/Dqd8px6rBY pic.twitter.com/TMga2J1tT3

“This administration has shown it will tear our democracy down if that’s what it takes to win,” Obama said, adding, “I did hope, for the sake of our country, that Donald Trump might show some interest in taking the job seriously; that he might come to feel the weight of the office and discover some reverence for the democracy that had been placed in his care. But he never did. He’s shown no interest in putting in the work; no interest in finding common ground; no interest in using the awesome power of his office to help anyone but himself and his friends; no interest in treating the presidency as anything but one more reality show that he can use to get the attention he craves. Donald Trump hasn’t grown into the job because he can’t.”

And as if to prove Obama’s point, Trump was tweeting in ALL CAPS.

HE SPIED ON MY CAMPAIGN, AND GOT CAUGHT!

The night ended with Kamala Harris, wearing one of the sharpest goddamn suits I have ever seen, delivering a helluva speech while becoming the first Black woman and the first Indian American woman to be a major party’s vice presidential nominee.

"Black, Latino and Indigenous people are suffering and dying disproportionately, and this is not a coincidence, it is the effect of structural racism." pic.twitter.com/7j3V702PQJ

“We’re at an inflection point. The constant chaos leaves us adrift. The incompetence makes us feel afraid. The callousness makes us feel alone. We can do better and deserve so much more. We must elect a president who will bring something different, something better and do the important work.”

“There is no vaccine for racism,” she said, delivering her line of the night.

"And let's be clear: there is no vaccine for racism. We have got to do the work. For George Floyd, for Breonna Taylor, for the lives of too many others to name."

She also made a lot of people happy by giving a shoutout to her “Chithis,” which is Tamil for aunties.

I literally have tears in my eyes. @KamalaHarris just said “chithis” which means auntie. My heart is so full right now

As someone who has a deceased Indian mother and scientist who was my best friend, I can’t believe this is our candidate for Vice President. How in my lifetime? How? @SenKamalaHarris

I’m excited enough about Kamala that maybe I’ll just skip tonight. Meanwhile, how is this for a capper?

SOUND ON: Jennifer Hudson performed "A Change is Gonna Come" at the #DemConvention. pic.twitter.com/hHD105SX2o


← Britney Spears Just Made a Move That Will Confuse the Hell Out of #FreeBritney | Reds Announcer Pulled Mid-Game for Homophobic Slur, Surreally Calls Home Run While Apologizing →