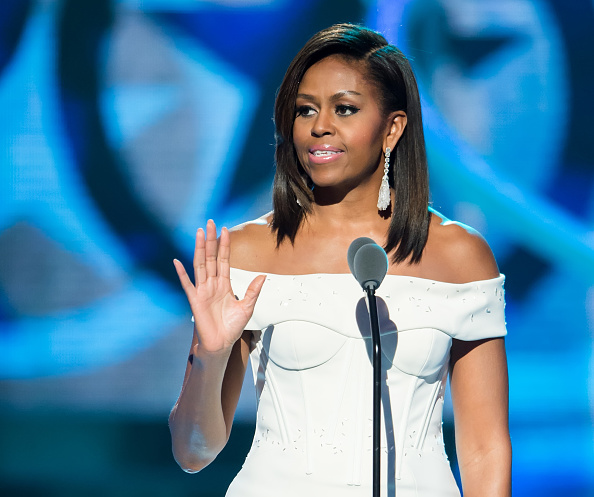 Michelle Obama Goes High, So She Can Look Down on Donald Trump While She's Verbally Whooping His Ass

In case you missed the first night of the Democratic National Convention, there were two stand-out speeches. Michelle Obama delivered a blistering indictment of Donald Trump in a pre-taped speech for the virtual convention. “Donald Trump is the wrong president for our country,” she said. “He is clearly in over his head. He cannot meet this moment. He simply cannot be who we need him to be for us. It is what it is,” she continued, echoing Donald Trump’s assessment of the pandemic.

“As I’ve said before, being president doesn’t change who you are; it reveals who you are,” Obama added, and those words carry extra meaning having seen what the Presidency revealed in Donald Trump over the last four years.

She also honed in on the suburban women that Trump is trying to scare with racist dog whistles by appealing to their morality. “Right now, kids in this country are seeing what happens when we stop requiring empathy of one another,” Obama said. “They’re looking around wondering if we’ve been lying to them this whole time about who we are and what we truly value.”

She wore a V-O-T-E necklace, and tried to get out ahead of the USPS problems and encouraged folks to vote early, by requesting those ballots now. And for those voting in person? “We have got to grab our comfortable shoes, put on our masks, pack a brown bag dinner and maybe breakfast too, because we’ve got to be willing to stand in line all night if we have to,” she said.

She also addressed those who have criticized her for “going high, when they go low.” However, she insists it’s the best way forward. “Going high is the only thing that works, because when we go low, when we use those same tactics of degrading and dehumanizing others, we just become part of the ugly noise that’s drowning out everything else,” she said. “We degrade ourselves. We degrade the very causes for which we fight.”

After her speech, conservatives got “Big Mike” trending on Twitter. If you don’t know what that means, good. Keep it that way. But it sure as hell illustrates how low the Republicans are willing to go, on top of Rush Limbaugh calling Kamala Harris a “ho” last week and, expectedly, suggesting that she slept her way to the Vice Presidential nomination.

“If you take one thing from my words tonight, it is this,” Michelle Obama said. “If you think things cannot possibly get worse, trust me, they can; and they will if we don’t make a change in this election. If we have any hope of ending this chaos, we have got to vote for Joe Biden like our lives depend on it.”

“Vote for Joe Biden in numbers that cannot be ignored,” she added, in the hopes that Biden’s margin will be so large that Trump cannot dispute the outcome. Earlier in the night, Bernie Sanders hoped to appeal to progressives to pad that lead: “This election is about preserving our democracy.” Ain’t that the goddamn truth.

Full video of Michelle Obama speech is here - she spoke for 18 minutes and change https://t.co/z4blrGhiVb

"My dad was a healthy 65-year-old. His only preexisting condition was trusting Donald Trump, and for that he paid with his life," says Kristin Urquiza, who wrote an obituary decrying politicians for a "lack of leadership" following her father's death from Covid-19. #DemConvention pic.twitter.com/LRS6IuRYrE


← Elizabeth Debicki as Princess Di Is Genius Casting | Heads Roll At 'Ellen,' DeGeneres Apologizes For Not Being 'Perfect' →