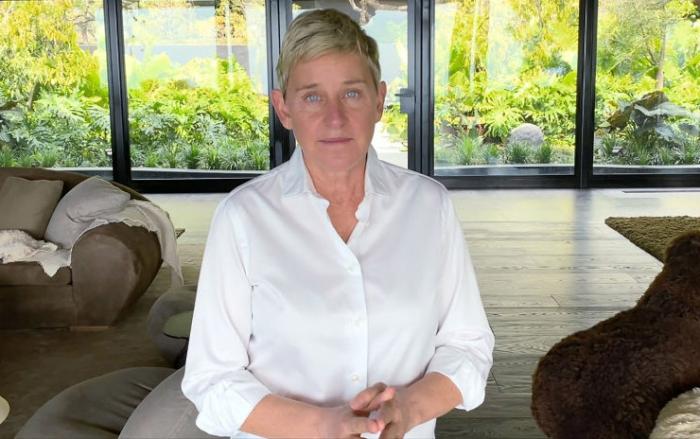 Heads Roll At 'Ellen,' DeGeneres Apologizes For Not Being 'Perfect'

During a video conference Monday, Ellen DeGeneres told her staff that three of her top executive producers would no longer be working on Ellen. Ed Glavin, Kevin Leman, and Jonathan Norman have left amid allegations of sexual harassment, racism, and use of fear and intimidation.

The official statement from the talk show’s rep is that the producers have “parted ways” with Ellen. Buzzfeed says they’ve been fired.

Among the allegations against them, Glavin was accused of sexual misconduct including being “handsy” with co-workers, ruling with fear, and installing a Matt Lauer button on his desk to close his office door “as an intimidation tactic.” Leman has been accused of requesting sexual favors, groping co-workers, and commenting on the appearances of male co-worker’s crotch bulges. Leman denies the allegations. Glavin has not responded to Buzzfeed’s request for comment.

DeGeneres also said on the call that the remaining executive producers (herself, Mary Connelly, Andy Lassner, and Derek Westervelt) are dedicated to eradicating the “culture of fear” that had made her show a toxic workplace.

In the video address, DeGeneres claimed to be “shocked” about reports that her staff felt they weren’t allowed to interact with her. According to Variety, she was “was emotional to the point of tears, and apologetic” as she confessed she’s “not perfect.” DeGeneres explained that she is an introvert who values her space, then apologized to anyone who felt “disregarded.”

“I care about each and every one of you. I am grateful for each and every one of you. I feel like I’ve kind of let the ball drop a bit because I’m focused on the show. I go in and I do the show, and I’ve just let everybody to do their jobs - to run different departments. And it just became a well-oiled machine, and I think that is the problem. It’s not a machine. This is people. These are human beings that are working hard every single day to put this together. This show would not be what it is without all of you.”

Beyond the trio of firings, other concrete changes to the show were announced. DeGeneres acknowledged that short-notice schedule changes were a problem and would be avoided in the future. To combat the intimidation projected by former producers, an HR hotline is being set up for staff to have a safe space to issue concerns and complaints. A dedicated HR representative has also been assigned to the show.

While Connelly and Lassner reported that Warner Bros.’s probe into the show’s workplace environment did not turn up evidence of “systemic” racism, they also took the video conference as an opportunity to announce that Ellen’s on-set DJ, Stephen “tWitch” Boss, has been promoted to co-executive producer. This comes after he spoke out in support of the embattled talk show host.

The remaining producers did not take questions from the 200 staff members on the call, but DeGeneres vowed there’d be smaller meetings to continue this conversation. All this has left one employee who spoke with Buzzfeed feeling “optimistic and hopeful.” As for DeGeneres, she touted her excitement for returning to the studio next month, telling staff, “This will be the best season we’ve ever had.”

← Michelle Obama Gives a Blistering Speech at the DNC | Why Is Scott Baio Trending On Twitter? Because Of Gun-Toting Ken And Karen →