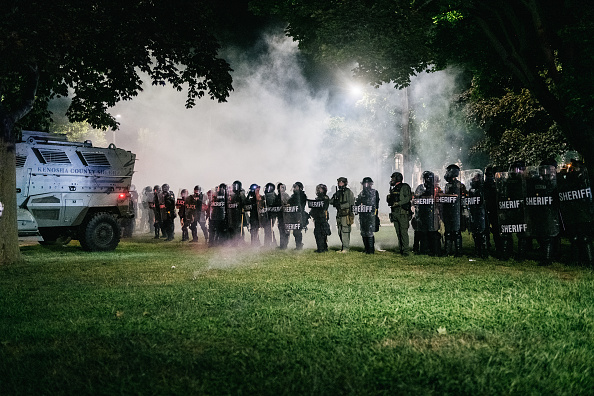 On the NYTimes The Daily podcast this morning, they talked about the battle over suburban white women, who many believe will be the decisive demographic in 2020, having swung the election to Trump in 2016 but back toward Democrats in the 2018 midterms. The Daily drew parallels between what is happening in 2020 and what happened in 1968, when Nixon exploited the unrest of the civil rights movement to essentially scare white women into voting for him. The Daily suggested that it is exactly what Trump is trying to do again — and that has been evident on the last two nights of the RNC — but, the podcast argues, the suburbs have obviously changed a lot since 1968, and it is unclear if Trump’s approach can or will work.

What’s also clear is that the GOP will use the unrest in Kenosha, Wisconsin to try and scare white suburban women. Let’s be clear, here, however, and remind everyone that the protests were not spontaneous. BLM protestors didn’t just decide to take to the streets: It came in response to police shooting an unarmed Jacob Blake in the back 7 times, resulting in his paralysis.

There have been protests over the last three nights. Last night, two people were killed and another seriously wounded. There is video evidence of the shooting. This is how The Washington Post (based on other reporting) describes the scene:

The shootings came after a confrontation between protesters and armed men who said they were protecting a gas station, the New York Times reported.

Shots were fired around 11:45 p.m. Tuesday, police said. After the first shots, a young White man carrying a rifle began running north on Sheridan Road, away from a crowd of protesters. Video shows the armed man fall to the ground and then fire multiple rounds into the crowd. Two more people fell to the ground, one shot in the arm and the other in the chest, the Journal Sentinel reported.

There is video. I’m going to link to it here with a MAJOR WARNING, because two people are shot to death and another badly wounded. If you don’t want to watch the video, this is what I saw, and it differs from the press account: I saw a young white man carrying what appears to be an AR-15 fall down (probably because he was running while carrying an AR-15). Other protestors were running at the time, and the white man sat up and shot at someone. A couple of other protestors, it appears, try to disarm him, but he maintained security of the weapon and shot at two more people.

The Post story may be a few hours old, but this is what is reported:

“I feel very confident we’ll have him in a very short time,” Beth said.

WHAT DO YOU MEAN, YOU’LL HAVE HIM IN A VERY SHORT TIME? HE WAS STANDING RIGHT THERE NEXT TO THE POLICE CARS WITH THIS HANDS IN THE AIR TRYING TO SURRENDER HIMSELF? WHAT WHAT?

However, there is solid sourcing in the form of a very clear video of a white man carrying a semi-automatic rifle shooting three people and then walking toward police, who drive past him toward the scene of the crime.’

I don’t know how to tie that back into the RNC and suburban white women voters right now — although conservatives on Twitter are having no problem suggesting that this particular incident is exactly why AR-15s should not be banned. All I know is that two police officers shot an unarmed Black man in the back 7 times as he was getting into his car, but three nights later, when a white man carrying a weapon who had just shot three people surrendered himself to cops, the cops ignored him.

“I feel very confident we’ll have him in a very short time,” Beth said.