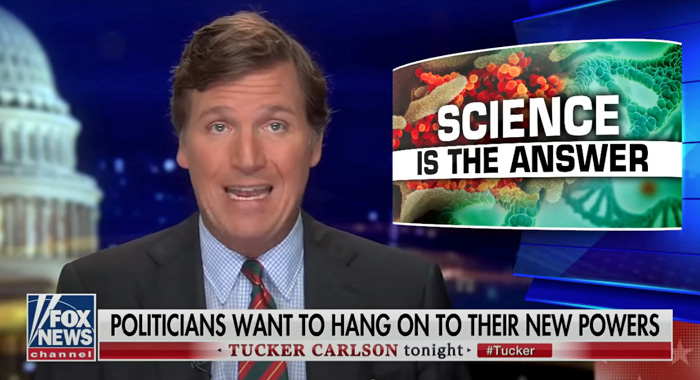 Just Kidding, Fox News Is Still Trying to Get People Killed (Take It Away, Tucker)

So remember yesterday when Fox News gave Diamond & Silk the boot for spreading conspiracy theories and basically telling people to go outside and get infected? Turns out they made the mistake of not being Tucker Carlson who apparently has free rein to spew whatever dangerous bullsh*t he wants.

On last night’s White Power Hour, or whatever his show is called — I honestly don’t know. — the Swanson heir decided to lean into Fox News’ supposedly more responsible stance by, let’s see, saying that social-distancing didn’t do a goddamn thing because the virus was never a big deal in the first place. Oh good. That’s really gonna help and not stir up a bunch of white boomers on Facebook who can’t believe they have to wait another month before stiffing their server at Cracker Barrel. Thanks, Tucker.

“Six weeks later we are happy to say that curve has been flattened, but it’s likely not because of the lockdowns,” he proclaimed. “The virus just isn’t nearly as deadly as we thought it was, all of us, including on this show. Everybody thought it was, but it turned out not to be.”

Carlson, who in early March appeared to call out both Trump and his Fox News colleagues for minimizing the severity of the coronavirus, has become in recent weeks one of the loudest voices at Fox calling for an end to stay-at-home restrictions in order to restart the economy.

In Tucker’s defense, he did come armed with medical advice from doctors. Specifically, two Bakersfield doctors who own urgent care centers in Bakersfield, Calif. and definitely don’t say things that are absolutely butt-loaded with red flags.

He said local leaders and colleagues of his here and across the country are reporting increased incidents of child molestation and domestic violence while people are at home, and suicides are also spiking. He also noted a contradiction between allowing people to shop at Costco and Home Depot but not allowing them to go to church.

In a nutshell, these two quacks have been touting their own statistical method of proving that the virus is “over-hyped,” which immediately resulted in their publicity stunt being condemned by the American College of Emergency Physicians and the American Academy of Emergency Medicine in a joint statement.

These reckless and untested musings do not speak for medical societies and are inconsistent with current science and epidemiology regarding COVID-19. As owners of local urgent care clinics, it appears these two individuals are releasing biased, non-peer reviewed data to advance their personal financial interests without regard for the public’s health.

Naturally, that information didn’t stop Tucker from spoon-feeding their thoroughly debunked “research” into the waiting mouths of Fox News watchers and Trumpers who will literally do anything they’re told. I’m talking things that no sane person should ever consider doing, but if it comes out of the right mouth-hole, they won’t even make it 24 hours without immediately complying.

So, yeah, sure, let’s tell these people that social distancing is horseshit. That’s definitely not going to send them scurrying into the open like a horde of mask-free Pences, and the next thing you know, we’re all home-schooling our kids until Biden’s second term. Thanks again, Tucker.