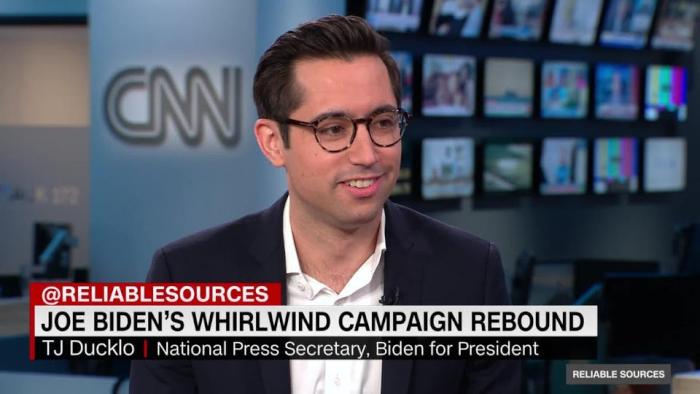 My statement on resigning from the White House. pic.twitter.com/3Jpiiv75vB

Here’s a statement from Psaki:

Updated — TJ Ducklo has been suspended for a week without pay, which honestly isn’t enough for pulling some petty-ass Jason Miller sh*t.

TJ Ducklo has been placed on a one-week suspension without pay, @PressSec says. pic.twitter.com/G6fBl3xBji

Look: If you are a communications aide for the White House, the press doesn’t have to be the “enemy.” But if you are a reporter covering the White House, there should be something of an adversarial relationship. And if a reporter and a White House communications aide are dating, obviously there will be ethical concerns. The least you can do is to be transparent about that relationship. If someone tries to call you on it, maybe don’t threaten to destroy their career.

To be clear, and just so no one accuses us of a double standard: Joe Biden should terminate the employment of White House deputy press secretary TJ Ducklo. Not because he is dating Axios political reporter Alexi McCammond — who covered the Biden campaign, but who has since switched beats to cover Kamala Harris so that she can pursue her relationship with Ducklo — but because TJ Ducklo lashed out at Politico reporter Tara Palmeri and tried to force her to kill the story, telling her by phone, “I will destroy you.” He also reportedly told Palmeri that she was jealous because an unnamed man “wanted to fuck” McCammond “and not you.”

This is all some real high-school bullshit. What’s doubly messed up here is that Ducklo tried to head off Palmeri at the pass by giving the story to People, who wrote a sympathetic piece about Ducklo and McCammond. It’s some real flowery stuff, too:

It is — forgive the cliché — a tale as old as tales themselves: Girl meets boy, boy and girl decide to have personal-not-professional drinks the following year. They date (pandemic-safe, of course). Parents get introduced. A romance blossoms.

For her part, McCammond says, “When my personal life had the potential to interfere with my work, I didn’t think twice about sharing my happiness in November with Axios that I’d found someone in TJ who shows up for me in a way I’d only hoped for.”

“Switching beats was an easy decision thanks to my Axios [family], who had my back in November and know just how lovely it is to find someone who cares deeply about you,” McCammond says.

Ducklo likewise “disclosed the relationship to his bosses at the very beginning of the relationship,” says a White House source who called him “an incredibly talented and valued member of the team.”

They know news of their relationship will stir disapproval over the optics and the timing, at least. The way the press covers politicians in Washington, D.C., is endlessly scrutinized — too lax or too harsh, too familiar, too fond.

I don’t want to sound too cynical, but the People piece, which also works in Ducklo’s cancer diagnosis in 2019, is the work of some really skilled PR professionals. It doesn’t change the fact, however, that Ducklo lashed out unprofessionally, and apparently did not apologize for “threatening and sexually harassing” Palmeri.

It’s something of a tale of two stories:

Folks, the embargo on love has been lifted for @TDucklo and @alexi ❤️https://t.co/aouBWxpPdd

Remember what we reported Biden said while swearing in his employees on the first day of his Presidency: “I’m not joking when I say this: If you ever work with me and I hear you treat another colleague with disrespect, talk down to someone, I will fire you on the spot. No ifs, ands or buts.” I hope we don’t see any ifs, ands, or buts from Jenn Psaki in her next press conference.

This sure feels like it belongs under the category of “treating another colleague with disrespect.”

← So, You Want To Read a Romance Novel This Valentine's Day? Here's Our Genre Primer | How Showbiz Betrayed Britney Spears And Charisma Carpenter In The Name Of Entertainment →