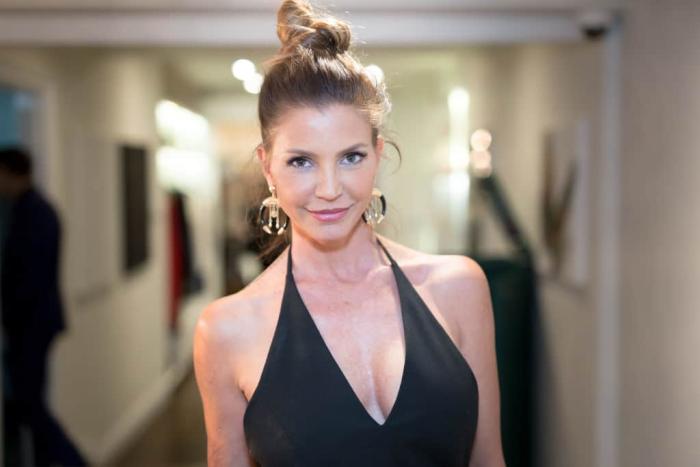 Joss Whedon is not a nice man, and that is not news. Kai Cole told us. Numerous people who worked on Buffy The Vampire Slayer told us. Carpenter told us some of her experiences before. Ray Fisher told us. Gal Gadot told us.

What made this all news this week was seeing it laid out in black and white, from Carpenter’s own statement and from the documentary, Framing Britney Spears. Two women, powerhouses in their own right, millennial icons, cult figures with smiles that could light up a stadium and legions of dedicated fans, both having experienced abuse from men who wanted to control them. One whose public suffering was served up as entertainment, and whose conservatorship abuse is happening in plain sight, and the other who suffered behind closed doors, subject to the whims of an egomaniac who only cares about people if they are meekly embodying his Creative Vision, while his industry shielded and coddled him.

With Carpenter, speaking out could have cost her her career. Spears couldn’t have spoken out even if she had wanted to.

Why would anyone do this? One of Shakespeare’s greatest villains, Iago, offers up a lot of ‘reasons’ for doing terrible things, but it’s the casual throwaway one that rings the most true: for “sport and profit”. In short, because he can, because it’s fun, and because he gains from it. He’s a racist and a misogynist. He’s entitled, manipulative and vicious. He pretends to be the opposite so well that literally everyone in the play celebrates him for his honesty and kindness. Sound familiar?

“As a guilty man I knew the only way to hide was to act as though I were righteous.” (Whedon’s words, reported by Kai Cole)

It all got very meta with Cordelia Chase. There’s a scene in season 2 of Angel that stands out as an example here. Cordy has landed an acting job, in a cheesy national commercial. She’s thrilled and grateful for the opportunity, but when she says as much to the director, he ignores her and demands that she takes off her robe. She is thrown by this, and hesitant, but the threat is clear: do you want this job? Then comply. The director makes her turn around in front of him so that he can inspect her level of hotness in her costume — a tiny bikini. He talks about her as if she is not there. “I’m supposed to want to sleep with her,” he whines. When Angel calls him out on his behaviour, he pulls rank and Cordy — CORDELIA FREAKING CHASE, who takes crap from no-one — meekly accepts the treatment, because she has to make nice to get ahead in Hollywood. You don’t like it, you get fired. Look at how horrible this business is, says Whedon, while offering up the full length visual of Carpenter in her costume. I’m totally making a feminist point, but also not neglecting an opportunity to ogle. I’m feministing so hard today.

A couple of episodes later, Cordy is made Princess of Pylea. Look at how powerful she is, says Whedon. Cordy makes a joke about how exploitative her last acting job was, then realises she is in a sparkly version of that previous bikini and grimaces. Later, the priest who made her princess chops off Lorne’s head to teach her a lesson about knowing her place. She is their puppet, they tell her. She might be wearing the shiny tiara but her power is an illusion. And just in case you weren’t skeeved out enough, they tell her in no uncertain terms: “You will mate when we tell you to mate.”

In the Whedonverse then, especially in relation to Cordelia, power and the body have a complicated relationship. Hotness confers value, though even that is only an illusion. Let’s skip ahead to season 4, and imagine Whedon as that sketchy commercial director, looking her up and down with a critical eye, “callously calling [her] fat when [she] was 4 months pregnant, weighing 126 lbs.” I’m supposed to want to sleep with her.

It should be ironic that a man who was obsessed with getting Cordelia Chase pregnant would be so furious at Carpenter becoming pregnant. Whedon’s fixation on horror pregnancy as a trope was brilliantly explored in this piece from Lindsay King-Miller, and the way that he used it to take vengeance on Carpenter is particularly gross. He couldn’t control Carpenter’s body, but he could take it all out on Cordy, not just with shaping the events of season 4 but vindictively ret-conning Cordy’s power arc to take away all of her agency over the choices that made her a champion. It’s clear that if Whedon couldn’t imagine her as hot, he saw no power there.

“I’ll never forget how Cordelia Chase, the beauty queen with the backbone, the most independent, ambitious woman in the entire run of Angel, was destroyed. Season 4 turned Cordelia into a villain, but not the way Willow (Alyson Hannigan) became a villain on Buffy, surrendering in a moment of anguish to all her long-established character flaws. I could have loved that version of evil Cordy: one whose frustrated ambitions and hard-won empathy exploded into violence. I would have followed that Cordy happily to the dark side.

Instead, we got the methodical dismantling of everything Cordelia was. Her sometimes painful honesty became deception and manipulation. Her love for Angel, which had grown slowly over the span of six years and two different shows, was abandoned in favor of seducing his son (let’s not even touch the plot twists that took Connor from newborn to young adult in a single season). And instead of delving into the human reasons that would cause a once-righteous character to take a dark turn (as the show did with Wesley, played by Alexis Denisof, around the same time), the show explained Cordelia’s villainy with a contrived demonic possession storyline. Cordelia had been taken over by the dark entity Jasmine (Gina Torres), which got pregnant so it could give birth to itself.

Season 4 rewrote much of Cordelia’s previous character arc, reframing her growth and agency as deliberate maneuvering to bring her under Jasmine’s influence. “Cordelia was chosen to become a higher being because she’s such a pure, radiant saint? Puh-lease,” said the demon who reveals the diabolical plan. It’s a slap to the viewers who loved her, as well as to Cordelia herself. You were stupid, the show said, to think Cordy could be a champion.”

When he had completed his character assassination, he unceremoniously fired her. Did he honestly think he could pressure her into terminating a pregnancy because he had an idea for his show and he didn’t want to change it? He couldn’t give Cordy some large handbags, or send her off on vacation for a few episodes? Whedon’s behaviour shows his utter contempt for one of the basic tenets of feminism, not to mention employment laws. No, to Whedon all of that comes a distant second to his Grand Artistic Vision. Cordy and Carpenter both deserved better.

Whedon’s abuse of Carpenter is a microcosm of what happened to Britney Spears. With Spears, her abuse was in plain sight, and committed by legions of Whedons, all pursuing their own “sport and profit”.

Whedon owned Cordelia Chase and he wanted to own Charisma Carpenter as well. In the case of Spears, Britney Spears the brand was a business with myriad investors, all keen to ride that money train no matter the consequences. Britney Spears the woman was the sacrificial lamb at the altar, her personhood an inconvenient side note even though her body was considered fair game — whatever she chose to do with it.

The Britney Spears Brand rested on a very careful balance of opposites: sweet and provocative, demure and alluring, girl next door and superstar: the classic virgin/whore dichotomy. Whedon’s perception of Cordy’s hotness led to a problematic form of power, but with Spears, the media represented her hotness as inherently problematic, and used it to undermine her power.

An entire business grew out of people not minding their own. With Spears, the entire media was taking the form of Angel’s sketchy director. Lose the robe. Turn. I’m supposed to want to sleep with her. There are many moments you could point to as The Worst, but let’s zero in on one especially heinous example: whether Spears was wearing underwear or not. How did sexually assaulting a woman by upskirting, and selling the images for cash become a thing? Oh right. Sport and profit.

There was more money to be made in bringing Britney down than there was in her rise. Spears needed help. What she got was, well, something else.

When Jamie Spears took over his daughter’s life, he was granted control over her estate and her person. Britney Spears the brand and the woman suddenly belonged to him. The specifics of how the conservatorship started and why it continues all these years later aren’t public knowledge, but conservatorships for people of Spears’ age are rare, almost impossible to get out of, and prone to abuse. In a way, they are reminiscent of a nasty side of 19th Century Britain, when women could be institutionalised for all sorts of socially inconvenient reasons by the powerful men in their lives. Comply or face the consequences. The dynamic that made Carpenter (rightly) fearful for her job cost Britney her freedom.

Legally, Spears has no power. She can make money, but she is not allowed to spend it without permission. Whedon felt entitled to ask Carpenter if she was planning to keep her baby; Spears is (allegedly) not allowed to marry or have more children without her conservator’s permission. Jamie Spears has a level of control over his daughter that Whedon can only dream about exercising over his cast and crew. Of course no-one is out there celebrating Papa Spears for being a feminist icon; as Spears’ brother complained, “The women in this family are very very strong-minded and have their own opinion and they want to do what they want to do. As much as I admire that, as a guy, one of two guys in this entire family, it kind of sucks.”

That’s really the crux of the matter isn’t it? Women having minds and opinions of their own. And so, Dear Patriarchy, I feel I should ask you a very important question:

“Don’t you know that you’re toxic?”

Carpenter and Spears, like countless others in this industry, were traumatised by their experiences of a system conspiring to keep them quiet, notorious for devouring starlets and spitting out the bits they don’t like. For Spears, the ‘cure’ was full patriarchal control — control that Jamie Spears will not relinquish without a fight.

Carpenter has rediscovered her voice — and first thing she did with it was to stand up for Ray Fisher. Britney’s still fighting for her voice. Yesterday, a judge ruled to loosen Jamie Spears’ hold over her, and the Free Britney crowd cheered. One step at a time. But there are hundreds of other souls caught up in the toxic power play of showbiz, and we are only just scratching the surface. So long as there are those in power who want to exploit their position for sport and profit, the show will go on.