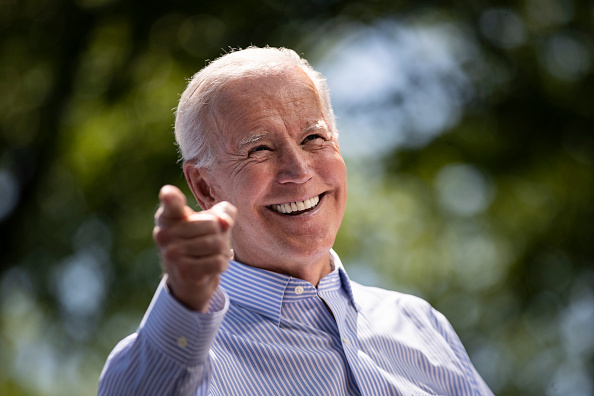 Election Updates: The Decision Desk Calls the Race, Declares Biden the Next President

3:51 — Remember Dan Crenshaw, the Texas Congressperson who Pete Davidson made fun of on SNL and then apologized to on SNL? Here he is tweeting a more sanitized version of Trump’s nonsense.

It should not be partisan to suggest calmly that investigations occur and the court process plays out.

Americans need to be sure of the winner and loser. The winners should especially want that.

Meanwhile, here’s the new Congressperson from Georgia — that QAnon lady — taking him to task for not being Trumpy enough, and then Krenshaw telling the QAnon lady to act more like a Congressperson.

Did you even read past the first sentence? Or are you just purposely lying so you can talk tough? No one said give up. I literally said investigate every irregularity and use the courts. You’re a member of Congress now, Marjorie. Start acting like one. https://t.co/47a7Gqq4lH

Nevada Attorney General Aaron Ford on CBS responding to Trump campaign: "This six-page complaint that they filed late last night is, in a word, garbage."

1:00 — Biden will speak tonight, but not before Kamala does.

Sen. Kamala Harris will also be speaking tonight, the campaign says, and will speak before Joe Biden.

With the attack by the Radical Left Dems on the Republican Senate, the Presidency becomes even more important!

Fox News is thinking about maybe possibly coming around.

"For POTUS to come out the other night and say definitively in that press conference that Democrats are stealing the election, that there is fraud, doesn't that hurt the system? … we haven't seen that level of fraud." — @BretBaier pic.twitter.com/llTE8tIaha

And Rush Limbaugh has conceded an election he did not run, but then I guess got a call and revoked his concession for a race he did not run.

Comes back, says he did not concede a Biden win, and that if he have that impression he didn’t mean to. https://t.co/f7jONxgtxb

This is nice, though.

CNN projects that @CaptMarkKelly will be the next Senator from Arizona, defeating GOP @SenMcSallyAZ, her second statewide defeat.

"As we said on July 19th, the American people will decide this election. And the United States government is perfectly capable of escorting trespassers out of the White House," campaign spokesperson Andrew Bates said in a statement.

And CNN continues to go off on Fox News.

"The Murdochs are ultimately responsible," @BrianStelter notes. "Rupert and Lachlan Murdoch are responsible for what is on this network in the coming hours."@JakeTapper says if you're a Fox reporter who obeys the instruction, "You might as well hand in your press credential." pic.twitter.com/LlwvkorXLS

Meanwhile, a big-ass batch of votes came in Arizona, and they don’t favor Trump in the way that he needs, basically foreclosing any kind of path through Arizona, not that it matters anymore. The networks are just waiting for the vote counts to mount in PA.

Fox News's map has Biden at 270 electoral votes, even if they haven't officially called the race yet pic.twitter.com/ZHrnorZgwH

The first woman to be Vice-President of the United States is going to be Black.

Abby Phillip: "Donald Trump's political career began with the racist birther lie. It may very well end with a Black woman in the White House." pic.twitter.com/FlCCZyqnVl

Inject this image into my fucking veins. Blend it into a shake and serve it to me in a frosty mug. Dry it and let me smoke it. Shred 10,000 copies of it and fill a bathtub with it so I can roll around in it. https://t.co/9GDllJgLnj

Y'all are out here forgetting about the mascot Philadelphians feel most connected to in their souls. pic.twitter.com/zvDKhkr63m

CNN reports that a national defence airspace is being established over Biden's home in Wilmington, first trappings of the presidency.

The moment Trump was fired pic.twitter.com/HlUaHhRBDw

9:11 — NBC is now referring to Biden as President-elect.

BREAK: NBC have taken the decision to refer to @JoeBiden as the President-elect #Election2020

9:01 — The networks haven’t called it yet, but Decision Desk has.

U.S. Office of Special Counsel has opened an investigation into the Trump campaign's use of the White House for campaign-related activities to see if federal law has been violated (@Reuters)

7:30 a.m. — Good morning, Pajiba. I love you. The hard work of Stacey Abrams and the spirit of John Lewis have turned the great state of Georgia blue. Overnight, Joe Biden officially overtook the President.

He has been waiting to post this for 5 hours https://t.co/vIz2bNkkCW

Okay that was worth staying up for. John Lewis’ county put Biden in the lead.

With Georgia, Trump cannot get to 270 (if he ran the table, he could only get to 269, and let’s not even discuss that possibility).

It’s worth noting, too, that both Senate races in Georgia will have runoffs, and that the balance of the Senate will depend on them (unless the Democrat somehow wins that Senate seat in Alaska).

Meanwhile, in Pennsylvania, Biden has closed the gap to 18,000. There’s still a ton of outstanding votes out there, most of which will go to Biden. It’s just a matter of counting now.

The PA SoS website says ~163,500 left to count; of those ~123,300 are in Philadelphia, Allegheny, Chester/Delaware/Montgomery, Bucks & Lehigh; Biden won all of them except the last 2 by resounding margins And that's even before you get to the further blue tint of mail.

54,000 of those votes are in Philly, specifically. That’s probably enough alone for Biden to overtake Trump, and convert that 18,000 deficit to an 18,000 vote surplus. This thing is well within hand. It should be over today, except the Trumpworld bellyaching, of which there will be plenty.

Lots more coming today, but I gotta get the kids to school. Don’t save the rest of Democracy without me!