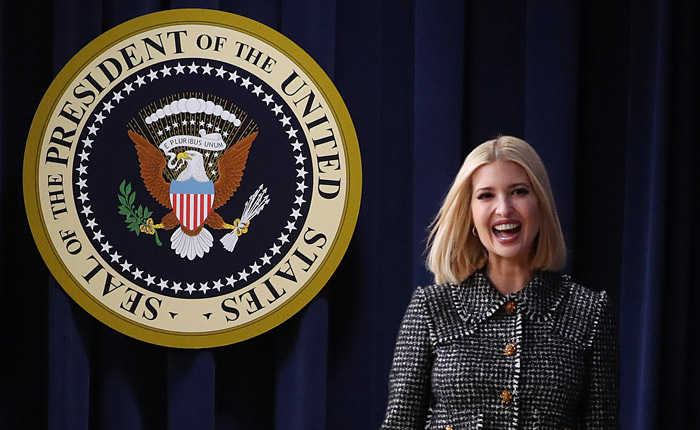 As protester across the country are being pummeled by police, President Donald Trump hid in a bunker while his daughter, Ivanka Trump, tweeted a plea for love. This arguably vacuous comment became grossly sinister when she tied it to Pride Month. This is a time designated for the LGBTQ+ community to celebrate. Ivanka turned our pride into a way to throw shade on the nationwide protests against police brutality, protests which her father has been adamant on cracking down on with force.

Perhaps her tweet was intended to deflect from the flood of news about police attacking peaceful protesters or the reports that her father was hiding like a coward as cities burned. Perhaps she thought she could turn to a joyous topic of Pride Month to get some easy likes. But the causes of Black Lives Matter and the continued fight for LGBTQ+ rights are united, not only in their common goal of equality for all but also because it was Black drag queen Marsha P. Johnson who is credited with kicking off the Gay Liberation Movement by chucking a brick and starting the Stonewall Riot.

Ivanka Trump is not an ally. She is a hollow hashtag user. She is a pretty, preening poster girl for her father’s agenda, which has included attacking the LGBTQ+ community in a litany of ways since his inauguration.

Here are just a few of the Trump Administrations bigoted efforts against the LGBTQ+ community:

*Resolutely did not follow the tradition of issuing a presidential proclamation designating June as LGBTQ Pride Month and withdrew the National Park Services’ sponsorship of New York City’s first permanent Pride Flag, located outside of the historic Stonewall Inn.

*Made drastic cuts to programs that have been crucial to the LGBTQ+ community, including Medicaid, Planned Parenthood, and the Center for Disease Control’s HIV and AIDS programs.

*Filed a court brief to the U.S. Supreme Court, asking the nation’s highest court to block transgender Americans from having nationwide workplace protections.

*Broadened the allowance of “religious exemptions,” which enabled greater persecution against LGBTQ+ people under the guise of religious tolerance.

There’s much, much more. You can see a comprehensive list of at GLAAD.

With some of these in mind, here’s how Twitter responded to Ivanka’s bullsh*t plea for love.

The first Pride was a riot. Get educated Ivanka

Hello! Your father's DOJ argued that LGBT people should be able to be fired for their sexuality!

Sorry but gays love ourselves and hate you

Your father is systematically rolling back our rights. You don’t care about us, and you never did.

YOUR FATHER HAS DISCRIMINATED AGAINST THE GAY COMMUNITY IN ENDLESS WAYS!
STOP THE LIES, IVANKA!
GAME OVERhttps://t.co/usZ2TRJ8cF

You gassed peaceful protesters last night for a photo op with one of your counterfeit handbags. Was that the “love” you speak of? pic.twitter.com/B5W0f5Dss4


As a gay woman I would like to kindly ask you to STFU, unless you’re willing to condemn the actions taken by your dad to make it impossible for our trans brothers and sisters to serve their country in the military. And your uncle Mike supports conversion therapy.

You're one of the most dangerous sources of hate in the world.

Ivanka tweeted a rainbow Pride flag. Her dad created the trans ban along with initiatives denying LGBTQ people healthcare, jobs, housing and adoption, and says he's open to repealing marriage equality; she's opposed none of this. And dressing like a Bond villain doesn't help pic.twitter.com/8Kn5ovaGme

How dare you.
You and your family are actively making this country worse for the LGBTQ+ community and many, many others.
Don't use us as a diversion.
Don't tweet emojis and hashtags that touch on our pride when you are a national disgrace.
Open your purse. Shut your mouth. pic.twitter.com/DebKFFByJU

NOPE!!!!!!! You are not invited to #Pride this year or ever, now… pic.twitter.com/cxSUzlZarW