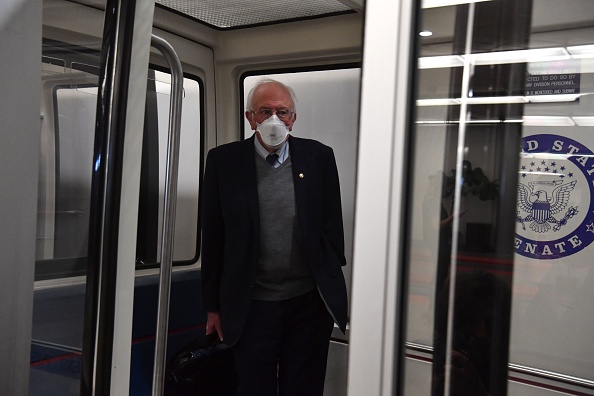 4:45 — A couple of striking videos have emerged from the trial.

NEW: Security video just released at Impeachment trial shows man with Confederate flag was at the frontline of breach pic.twitter.com/vNeMUdkybs

Same officer who directed the mob away from the Senate Chamber—moments after Romney almost ran into them—by intentionally shoving the leading one and then running away in the wrong direction, away from the unlocked Senate door, as the almost all white mob chased him—a black man. https://t.co/Gg6iJsSelM

Stacey Plaskett says Pence was evacuated to a secure location at 2:26 p.m. Minutes before, Trump was tweeting that Pence didn't have courage to do what should have been done.

If Senate Republicans fail to convict Donald Trump, it won't be because the facts were with him or his lawyers mounted a competent defense. It will be because the jury includes his co-conspirators.

And how can you listen to this and not vote to convict? I mean, putting aside the insurrection itself, Donald Trump spent months undermining democracy, which itself led to the insurrection.

Castro: "He truly made his base believe that the only way he could lose was if the election was rigged. And senators, all of us know and all of us understand how dangerous that is for our country." pic.twitter.com/q1nVV4Ky0B

11:06 — More good news! I keep waiting for someone to say that it will be a temporary ban, and that he will return. This is reassuring for our collective mental health.

10:15 — This is my favorite news of the week: The Fulton County Georgia district attorney is opening up a criminal investigation into Donald Trump’s phone call with Secretary of State Brad Raffensperger. Raffensperger himself has already opened up an administrative investigation. The phone call may have violated as many as three laws. Georgia is the second state currently pursuing criminal charges against the former President, including New York.

9:20 — Good morning, and welcome to Day 2 of Donald Trump’s impeachment trial. This will also serve as the day’s open thread.

Yesterday, in theory, everything should have gone the right way. The Democrats introduced powerful video evidence. Trump’s legal team was flat-out incompetent. The weight of the evidence was clearly in the Democrats’ favor. In the end, however, they only got 56 votes, enough to move the trial ahead but 11 votes short of the number needed to convict. Why? Because the GOP ain’t care.

Loving the Republican Senators absolutely trashing the Trump lawyers minutes after voting for their argument. ‘They were not persuasive but I also wasn’t persuadable.’

Meanwhile, during the introduction of the video footage, a number of Republican Senators looked away, or stared straight ahead at their notebooks, doodling and refusing to engage with the chaos and death many of them contributed toward. And so it goes: The good guys don’t always win (although, to be fair, the good guys aren’t always good guys, either).

To wit: Andrew Yang holds a commanding lead, so far, in the New York City’s mayor’s race. For the love of God, find someone with both name recognition and competence. Where’s Huma Abedin?!

Back to the impeachment: I’m not going to get into them, but both the Post and I believe the Times had “what’s Donald Trump’s mood” stories last night, and I cannot tell you how little I gave a damn. Is he upset? Is he bored? Is he still nursing grievances? Is he calling up his aides and yelling? Is he having dinner with Melania at the club? I DON’T GIVE A SHIT. You know what? I think that the American media used the word “grievance” more in the last two or three years than it has in the entire history of the media, combined. Has there ever been a more angry white man word than “grievance”? I hate it.

You know what else I don’t give a damn about?

That is also the case with the majority of non-white people in prison. Investigate that, bitch. These people? F**k their feelings. As for their pocketbooks. Maybe if they hadn’t voted for white supremacy instead of against their own financial interests, they wouldn’t have had as many financial problems.

Finally, I’ll end with the best video of 2021, so far, if only because three of you haven’t seen it yet, and we will not have succeeded as a nation until every last one of us has seen this video. Please do your part in ensuring that this video reaches its peak saturation point.

← Review: 'The Map of Tiny Perfect Things' Brings Whimsy To Time Loop Romance, And Yet... | 'Malcolm and Marie' Review: John David Washington's Remarkable Indictment of His Own Director →