Whatever else one might want to say about Donald Trump and his stupid obsession with crowd sizes, I’ll grant him this: He draws massive crowds. In a New Hampshire rally last week, he drew 11,700 people, a capacity crowd for the Manchester, NH arena. Conceded. Crowd size does not necessarily equate votes, but it probably does correlate with enthusiasm. Forty percent of this country supports Donald Trump. The more crowded his rallies are, the more likely he’s going to turn out that 40 percent of voters.

Elizabeth Warren has 12,000 supporters at her Minnesota rally! #Warren2020 pic.twitter.com/hEeRU1yi2N

On the day we were told to give up on things like ideas and enthusiasm, to swallow hard and vote for the establishment's pick, Elizabeth Warren drew 12,000 people on a Monday night in St. Paul, talked about big ideas and then stayed for hours taking thousands of selfies.

Elizabeth Warren had 12,000 supporters at her rally in Minnesota tonight. This is important because in order to beat Donald Trump we need a candidate who can fill arenas and inspire people to knock on doors and register new voters. Warren is that candidate! #Warren2020

I don’t read too much into crowd size, but that crowd size gave me chills. It reminded me of the crowds at some other rallies in early 2008. 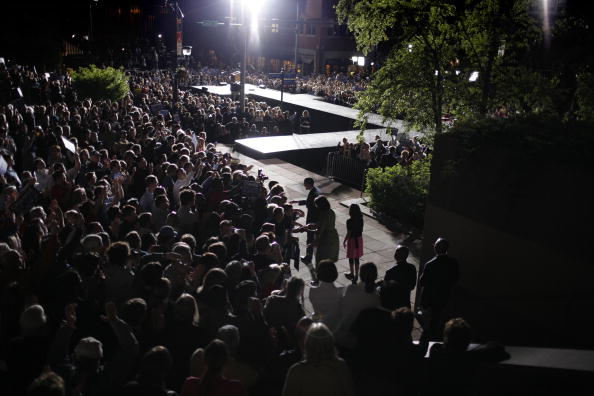 Contrast that with, say, Joe Biden, whose own wife is essentially asking voters to “settle” for her husband.

Dr. Jill Biden urges voters to consider her husband's electability, saying: "your candidate might be better on, I don’t know, healthcare than Joe is, but you’ve got to look at who’s going to win this election." pic.twitter.com/xdPk95wWnv

“So yes, you know, your candidate might be better on, I don’t know, healthcare than Joe is, but you’ve got to look at who’s going to win this election, and maybe you have to swallow a little bit and say, ‘OK, I personally like so and so better,’ but your bottom line has to be that we have to beat Trump.”

I don’t want to “swallow a little bit.” What kind of call to action is that? How is that in any way inspiring. I still have a “Yes, We Can!” poster hanging up in my house. I’m not about to replace it with a “Swallow a little bit” poster.

Elizabeth Warren is a phenomenal candidate. Though not all the Democrats support all of her policies, she actually has the highest favorability among all Democratic candidates (85 percent according to a poll I saw a couple of weeks ago). I love her policies, and if the economy goes into the tank under Trump as economist and business leaders are expecting, the year 2021 would be a great time to overhaul the way the American economy works by taking some of the billions away from the most wealthy and providing more affordable health care for everyone and wiping student debt away from millions of people who can’t buy a house or work a job they love because they’re strangled by health insurance premiums and student loans.

When Elizabeth Warren says she cares about people, I believe her. Like, I really really believe her. Maybe one of the other candidates will eventually be able to mount this level of enthusiasm, but I don’t know. She somehow does it without also dividing people, and even those who honestly take issue with Warren can only do so for policy reasons, because she is a tremendously kind and compassionate person. I think over the long haul, everyone is going to see that. Trump will no doubt continue to sh*t on her, but with the large majority of people, I don’t think he’s ever going to be able to successfully vilify her. She’s too good. Too kind. Too caring.

And here’s the other thing about Elizabeth Warren: She’s the right person for the job now, and I refuse to settle for the “electable” candidate when the right candidate is staring us right in the face. She’s got a plan, folks, and I f**king love that plan.