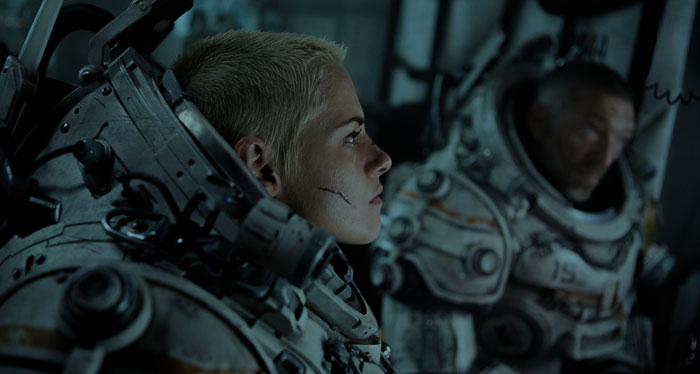 Kristen Stewart Is Giving Us Ripley Vibes In 'Underwater' Trailer

You never know what Kristen Stewart will do next. The American actress who broke through with Twilight has been steadily scoring acclaim for her performances in daring dramas like Clouds of Sils Maria, Still Alice, and Personal Shopper. Yet Stewart’s not done with mainstream movies. She’s headlining the Charlie’s Angels reboot and a new creature feature, called Underwater. But that’s not all.

This celebrated actress is also a master of screwing with Kinsey scales, whether it’s with her longing glances at Cate Blanchett. (Who could blame her?) Rocking a spunky style reminiscent of The Legend of Billie Jean. Or giving us Ripley vibes in the trailer for Underwater.

“We drilled to the bottom of the ocean, and we don’t know what came out.”

This trailer teases a mighty but ambiguous threat from the unknown realms of the deep, deep sea. It gives us Stewart in casual smoke-show mode. It gives us plenty of action. And it gives us an ensemble cast that includes Iron Fist’s Jessica Henwick, The Get Down’s Mamoudou Athie, 10 Cloverfield Lane’s John Gallagher Jr., French stud Vincent Cassel, and—ugh—T.J. Miller.

Admittedly, Miller’s appearance in this otherwise tempting trailer is a buzzkill. But before you hold that against Stewart and company, note that Underwater was shot in spring of 2017, months before the sexual assault allegations against Miller came out. Why it’s been shelved since then is hard to say. Maybe because of Miller’s series of scandals, which also include calling in a bomb threat on Amtrak. Or perhaps the Fox/Disney merger played a role. Regardless, Underwater and its buzzcut and kickass K-Stew will finally be hitting heaters January 10, 2020.

Will you dive in?