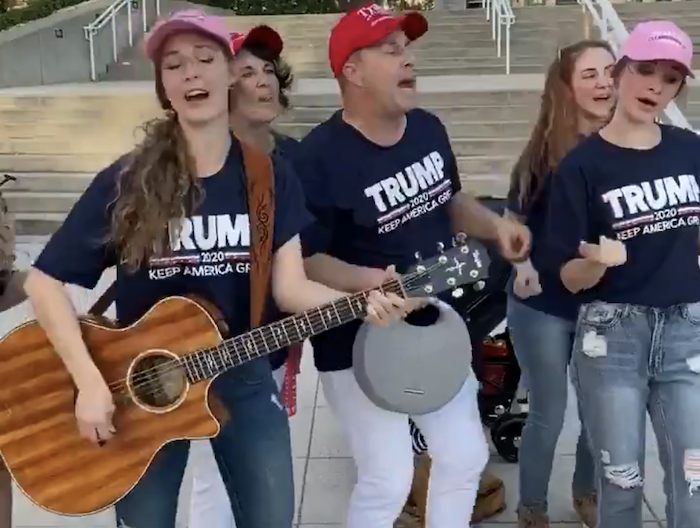 Saturday, Donald Trump will hold a rally in Tulsa, Oklahoma inside a building that holds 20,000 people. The indoor building next to it will hold another 10,000 people, and thousands more people will crowd around a stage outside, because this is not just a normal campaign rally. The Trump campaign is spending a ton of money on it, and advertising it as Trump’s “Great American Comeback.” It will not only feature the Trump rally at the end of the event, but appearances by a number of other politicians, including Senators Tom Cotton, Jim Inhofe, and James Lankford, as well as Ohio Congressman Jim Jordan, dozens of other surrogates (like Diamond and Silk) and half his campaign staff. Mike Pence will be there, too. It will be the biggest indoor crowd in the United States in three months.

Temperature checks will be given (even though they are pointless for asymptomatic people), hand sanitizer will be available (and ignored) and masks will be offered (but no one will be required to wear them). There will also be camera crews in attendance as well as musical acts. There are people already lining up for the rally, three days in advance. I am so, so sorry for inflicting this upon you:

Tomorrow, of course, was the original date for the rally, but the President moved off of that date because it is Juneteenth, and Tulsa was the site of the 1921 race massacre. Trump’s campaign manager, Brad Parscale, admitsthat he had never heard of Juneteenth or the Tulsa race massacre, which was why it was originally scheduled on that date. For someone who admits he has never heard of Juneteenth, this tweet is ironic:

As the Party of Lincoln, Republicans are proud of what Juneteenth represents and the Emancipation Proclamation.@realDonaldTrump has a solid record of success for Black Americans.

It’s @JoeBiden who has the horrible record of racial division and condescension.

Oklahoma was also chosen by the campaign because it is a deeply red state, and Tulsa is a rare big city with a Republican mayor (who will not be attending the rally, because he is not insane). Neither Parscale nor Trump understood, either, that Juneteenth is usually celebrated for multiple days, although this year, the Tulsa Juneteenth Planning Committee cancelled their celebration because of Covid-19 concerns.

Trump — who will make everyone attending the rally sign a waiver promising not to sue if they get Coronavirus — has no such concerns, despite a surge in new coronavirus infections in Oklahoma. This being the largest indoor gathering in three months also presents the potential for a super-spreader event, which could send hundreds of people back to their hometowns in Oklahoma and surrounding areas with Coronavirus infections. There is currently a legal challenge headed to the state Supreme court to stop the rally and abide by the CDC rules.

But don’t worry about it, Oklahomans. Coronavirus will probably be gone by Saturday! “I don’t like to talk about that because [Coronavirus is] fading away,” Trump told Sean Hannity last night. “It’s going to fade away, but having a vaccine would be really nice and that’s going to happen.”

Trump’s rally in Tulsa on the weekend of Juneteenth proves what we already knew: he’s the largest superspreader of division and hatred we’ve seen in generations. pic.twitter.com/LuNKjfK0pB


← Danny Masterson Arrested, Charged with Raping Three Women | If Things Go the Way They're Going, 'Palm Springs' May End Up Being the Movie of the Summer →