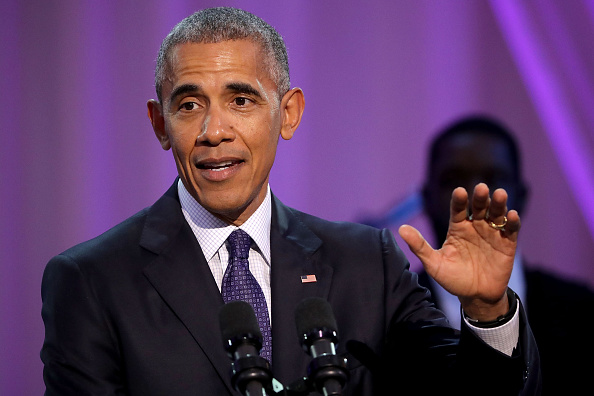 Donald Trump Sent 125 Tweets and Retweets Yesterday. Here's the One that Matters

Yesterday was Mother’s Day. I hope you all enjoyed it, in particular, the mothers among you. On the same day, Donald Trump sent out 125 tweets or retweets. One hundred and 25. 125. CXXV. If you didn’t know the President of the United States was responsible for the 125 tweets and retweets, you would have thought it was a literal crazy person manning the Twitter account. It was an all-day barrage of far-out there conspiracy theories and nonsense. I lost count, but something like 30 of those tweets or retweets referred to ObamaGate or Obama-related conspiracy theories. Just as many referred to Hillary conspiracy theories, and the rest was all about the innocence of Michael Flynn and the Russian hoax, much of which was tied to Obama.

It was all nonsense, including what a great President Trump is to … the Native American communities. A lot of James Comey bullshit, something about Sally Yates being a blackmailer, a lot of business about imprisoning Adam Schiff, talk of James Clapper (man, that name is a blast from the past), blaming Obama for the Coronavirus, something about how CBS is supporting China, a lot of anti-Chuck Todd bullsh*t.

It is all madness. Just blathering crackpottery. Also, based on 95 percent of the tweets, you’d never know that there was a pandemic going on right now. And maybe that’s the point. Maybe Trump is trying to force America back into arguing about Mueller and Michael Flynn, Obama and Hillary, Adam Schiff and Chuck Todd, because — at least with his base — that’s where he feels most comfortable. Trump is currently losing support among seniors, which is where he typically performs the best. Why? Because he’s advocating the reopening of the economy before it’s safe to do so, which endangers the lives of those seniors. So, he’s trying to stoke those racist resentments again.

Anyway, here’s the tweet that matters, and this is what set Trump off yesterday.

He got caught, OBAMAGATE! https://t.co/oV6fum0zIS

He got “caught”? Obamagate? OK, first of all, it is not illegal for a former President to speak out against a current President. That’s not a jailable offense. Second, it was in a private conversation (with the Obama Alumni Association) that leaked, and this is what he said (via The Guardian):

“The news over the last 24 hours I think has been somewhat downplayed - about the justice department dropping charges against Michael Flynn,” Obama reportedly said.

“And the fact that there is no precedent that anybody can find for someone who has been charged with perjury [in fact Flynn pleaded guilty to lying to the FBI] just getting off scot-free. That’s the kind of stuff where you begin to get worried that basic - not just institutional norms - but our basic understanding of rule of law is at risk.

“And when you start moving in those directions, it can accelerate pretty quickly as we’ve seen in other places.”

Obama also added that Trump’s handling of the epidemic has been disastrous.

“It’s part of the reason,” he reportedly said, “why the response to this global crisis [the coronavirus outbreak] has been so anaemic and spotty. It would have been bad even with the best of governments. It has been an absolute chaotic disaster when that mindset of ‘what’s in it for me’ and ‘to heck with everybody else’, when that mindset is operationalised in our government.

“That’s why, I, by the way, am going to be spending as much time as necessary and campaigning as hard as I can for Joe Biden.”

This is essentially why Obama has tried to remain quiet the last three-and-a-half years, to the annoyance and consternation of many of his supporters. It’s because he doesn’t want to become the focus. He said some things that leaked, and now he has become the target of Trump’s ire. I genuinely don’t know if that’s a good or a bad thing. Trump is obviously much more comfortable having a fight with a pretend figure that he and his supporters have created in their imaginations, but he also runs the risk of reminding us all just how much better we had it under Obama. I don’t know how his base sees it, but when 2500 people are dying every day from this virus and Trump is attacking a former President, it certainly feels pretty out of touch to me.