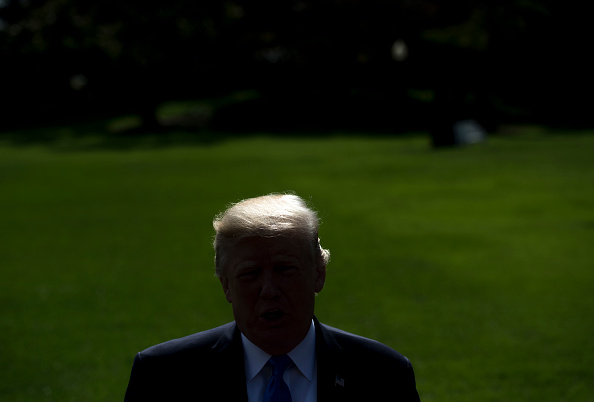 We haven’t covered Donald Trump in a long time, but look: If the man’s political career, which is already on fire, is going to crash and burn, we sure as hell would like to document it. We deserve that.
Two days ago, Donald Trump rescinded his endorsement of Alabama Congressman Mo Brooks, who is running for Senate. With the backing of Trump, Brooks once had a sizable lead in the polls in that race, but the lead has evaporated, and Trump didn’t want yet another of his endorsed candidates to lose. As his influence is waning, so is the power of his endorsement, and a few more major losses — especially in a deeply red state like Alabama — would render his endorsement, and influence, meaningless, which would obviously shatter his chances at another run in 2024.

Trump tied his rescinsion to comments that Mo Brooks made last August, which Trump has been stewing about for months. Brooks was one of Trump’s most ardent supporters. He was there on January 6th hyping up the crowd. He supported the Big Lie, and he still supports the Big Lie. However, Mo Brooks had the audacity to suggest that Republicans should look ahead instead of relitigating the 2020 election.

Supporting the Big Lie, but not harping on it was enough to get Brooks canceled by Trump for being, uh, “woke.” As we all know, there’s nothing worse for a Republican than to be branded “woke,” or “alert to injustice in society, especially racism.” It’s a death knell to one’s campaign.

Brooks is not taking being called woke sitting down. Reasoning that since he’s already lost the Trump endorsement, Brooks has decided to pivot ever-so-slightly. He still believes in the Big Lie, but now Brooks is saying that Trump has been trying to convince him to reinstall Trump as President.

“As a lawyer, I’ve repeatedly advised President Trump that January 6 was the final election contest verdict and neither the U.S. Constitution nor the U.S. Code permit what President Trump asks. Period,” Brooks said. Brooks claims that Trump rescinded his endorsement because he refused to put Trump back into the White House, which — it goes without saying — Brooks could not do even if he wanted.

Elsewhere, for what it’s worth, we finally know now exactly why that Manhattan prosecutor, Mark F. Pomerantz, resigned from his position in the district attorney’s office after it refused to indict Trump. The Times received a copy of his resignation letter, which states that Trump was “guilty of numerous felony violations” and that it was “a grave failure of justice” not to hold him accountable. “The team that has been investigating Mr. Trump harbors no doubt about whether he committed crimes — he did,” Mr. Pomerantz wrote.

Both Pomerantz and his boss, Alvin Bragg, believed that Trump had falsified the value of his assets on financial statements. However, the two disagreed over whether Trump “knowingly” did so, which is an element of the crime. There’s a lot of that going around Trump when prosecutors consider bringing charges: Did he “knowingly” commit these acts, which is to say: Some folks are pulling their punches because they believe Trump is too goddamn dumb to know better. This has also been a sticking point over Trump’s involvement in pushing the Big Lie. Most claim that Trump perpetuated a fraud on the American people by suggesting that the election could be overturned in his favor, leading to the January 6th riots. Some lawyers, however, assert that Trump actually believed it was possible, despite hearing otherwise from his advisors.

In other words, there are certain kinds of criminal acts that are challenging to prove against Trump because he’s a delusional moron, which not only makes him a dangerous man as President but also allows him to get away with criminal fraud. It’s also worth noting that two other Senate candidates that Donald Trump has endorsed — Rep. Ted Budd in North Carolina, and David Perdue in Georgia — both look as though they will lose primary races in their respective states.

Meanwhile, Alvin Bragg is taking a lot of heat on Twitter this morning.

Once again Trump evades the rule of law. Given the resignation letter of the Manhattan prosecutor on the case stating “Trump is guilty of numerous felonies…It is a failure of justice not to prosecute,” the question is—
What’s the real story on District Attorney Alvin Bragg?

New York City is going to demand an explanation for why @ManhattanDA Alvin Bragg, within weeks of assuming office, overrode both his predecessor and line prosecutors, who had all concluded Donald Trump was guilty of multiple felonies and decided to prosecute him.