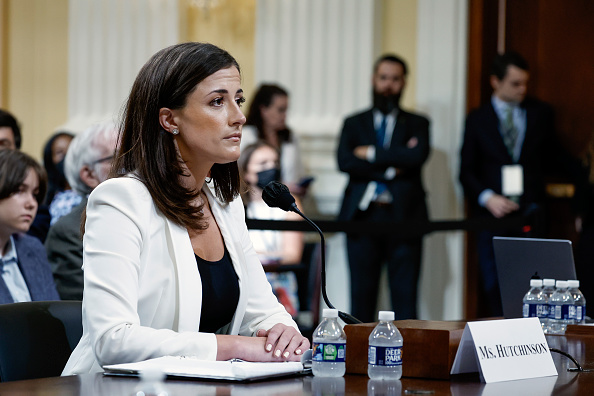 I genuinely do not know if anything will come of the House’s January 6th Hearings besides Liz Cheney being primaried in Wyoming. I will say that the hearings appear to have obviously inflicted damage on Donald Trump enough that Fox News is apparently pivoting away from the former President and looking toward a Trump-free 2024. (The bad news is, they are pivoting toward Ron DeSantis).

I do not know whether Donald Trump will ultimately land in prison. The decision to prosecute will be left up to Merrick Garland, but based on the testimony given so far, he clearly has a strong case.

To wit: In a surprise hearing today, Cassidy Hutchinson — an aide to former White House chief of staff Mark Meadows — gave damning testimony about the days leading up to January 6th, as well as the day of. For instance, Rudy Giuliani told her on January 2nd that they would be “going to the Capitol,” and her own boss said on that day that things might get “real bad” on January 6th.

The people screened for Trump’s rally on that day had weapons — knives, brass knuckles, pepper spray, spears, and gas masks — and not only did her boss Mark Meadows know that and not care, but Trump knew it, too. Trump was told they had weapons and he basically said, “let ‘em through.”

Cassidy Hutchinson on Mark Meadows: "And I remember Pat [Cipollone] saying to him something to the effect of, 'The rioters have gotten to the Capitol, Mark. We need to go down and see the President now.' And Mark looked up at him and said, 'He doesn't want to do anything, Pat.'"

He knew. He didn’t care. He not only did nothing about it but he also helped aid them by asking to remove the metal detectors. He wanted the rioters to breach the Capitol. Moreover, he wanted to join them.

Breaking. Cassidy Hutchinson: "The president said something to the effect of, 'I'm the F'ing president, take me up to the Capitol now.'"

Hutchinson says she was told Trump tried to grab the steering wheel of the Beast. He then reached toward the throat of a USSS agent.

“I am the effing president, take me up to the Capitol now.”

Cassidy Hutchinson says Trump reached to grab the steering wheel when his security detail refused to take him to the Capitol — and lunged at his clavicle. pic.twitter.com/X6UQZvf1iT

Meanwhile, after Bill Barr gave an interview with the AP saying that there was no evidence to overturn the election, Trump lost his damn mind and threw his lunch at the wall.

"There was ketchup dripping off the wall" — Hutchinson testifies Trump literally threw his lunch against the wall after Bill Barr told the AP there was no evidence of election fraud sufficient to overturn the election pic.twitter.com/CFF2ghfzgk

And if you are wondering if this testimony has mattered, here’s Fox News again likely using the testimony as a precursor for switching allegiances.

Fox anchor Bret Baier on Cassidy Hutchinson's testimony: "Bottom line though, this testimony is stunning … I think this — it does move the ball in this hearing" pic.twitter.com/E9Ao6Z6Ece

Now we know why the Jan. 6 Committee wanted this information out so quickly.

He doesn’t deserve the RT but damn this is telling. pic.twitter.com/USqHmj6PcL

100% here. I did over 100 depositions of Clinton officials - never saw anything like this. Explosive and criminal. https://t.co/7nD9HABZHY

People of sound mind don’t reach to try to grab a steering wheel, from the backseat, to drive to the Capitol to overturn a democratic election.


← Dakota Johnson Blames the 'Incredibly Cheesy' E.L. James for Those Disastrous 'Big Naked Movies' | 'We Will Adopt Your Baby' Memes Bring Levity to the End Times →