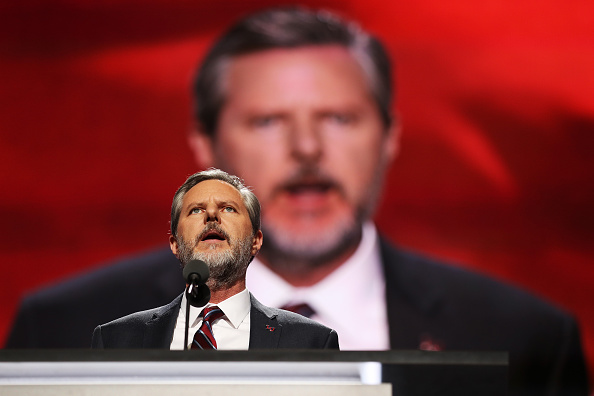 Can We Talk About that Racy Jerry Falwell, Jr. Photo?

Mike covered the Falwell, Jr. photo the other day in Pajiba Love, but I have to admit: I didn’t click the link. I just assumed it couldn’t be that bad, or he’d already been fired, especially considering the, ahem, “rumors” about photos between his wife and “the pool boy” that are purportedly being used as leverage against him to ensure his evangelical support for the decidedly non evangelic Donald Trump.

And then there is angry drunk Falwell.

I don’t want to belabor the point but again: WUT is happening pic.twitter.com/e3Vrld2zfr

Both the photos were quickly deleted from Instagram, although they were captured above by a religious reporter.

The photo itself is bizarre enough, but the context isn’t helping. He called into a radio show to try to explain it, but he was clearly wasted when he called in.


Here is the audio of a very drunk Jerry Falwell, Jr. calling into a *morning* radio show to explain (unintentionally) why he looked like a drunk, unzipped mess on his yacht. He had posted this photo on Instagram, which would have gotten a student kicked out of his own @LibertyU. pic.twitter.com/ouzZIZ5c07


The woman his his wife’s assistant, and they were on a yacht on vacation, and he had his arm around his wife’s assistant, and they were both wearing a “costume,” but also, their pants didn’t fit, ergo they decided to dress like the Trailer Park boys, but also, what was in the glass was a liquid he called “black water,” like we don’t know what wine looks like? Dude: Will and Jada proved that the world is ready to accept open marriages. Share your truth, man!

To put this further into context, Falwell, Jr. runs Liberty University, where students are not allowed to dress provocatively, drink, or co-ed dance.

“I promised my kids I’m going to try to be a good boy from here on out,” he told the radio show, while slurring, as though he and his dick had gotten himself in trouble with his kids several other times in the past. “It was all in good fun.” Yeah, it was. It looks like it was a lot of fun, Jerry, and good for you! Except for the whole thing about preaching the exact opposite.

Anyway, one Republican Congressman thinks that Falwell should resign.

As a Music Faculty Advisory Board Member and former instructor @LibertyU, I’m convinced Falwell should step down.

None of us are perfect, but students, faculty, alumni and @LUPraise deserve better.


It’s worth noting that Mark Walker has called his female colleagues in the House “eye candy” and still supports Donald Trump, so he’s clearly selective when it comes to appalling behavior and moral outrage.