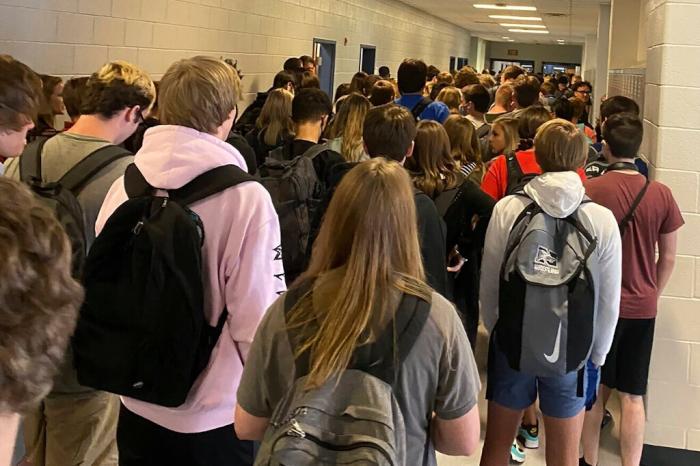 John Lewis is gone, but will not be forgotten. The Civil Rights leader has urged the American people for generations to “get in good trouble, necessary trouble” to shape our nation to be a better place. Most often, this idea is applied to the ongoing fight for equal rights for Black people with the Black Lives Matter movement. Yet one young revolutionary in Georgia quoted the late congressman when talking about her rebellion against pandemic denial.

We reported yesterday how a Georgia student was suspended for posting a photo online revealing their school’s crowded halls, where students were not social distancing or wearing masks. 15-year-old Hannah Watters is one such student. She was suspended from North Paulding High School for five days for violating the codes of conduct.

In an interview with CNN, Watters details the codes she’s been suspended for breaking: 1) Do not use a cellphone during “instruction time.” 2) Do not use a phone for social media during school hours. 3) Do not record fellow students to post on social media platforms.

Watters notes she did not break the first two rules, because the pic was snapped in between classes and shared on Twitter after the day’s dismissal. As for breaking that third rule, Watters declared, “I’d like to say this is some good and necessary trouble. So, I don’t regret this because it needed to be said.”

“I’d like to say that this is some good and necessary trouble.” — student who posted the viral photo of a Paulding County school (Georgia) pic.twitter.com/l3nAn5Bz83

Watters was not the first student to post pics of the crowded halls online. One went viral on their first day back. However, she tells CNN that she was disturbed by how online infamy didn’t change things in the halls.

“I took [the photo] mostly out of concern and nervousness after seeing the first days of school,” she explained. “I was concerned for the safety of everyone in that building and everyone in the county because precautions that the CDC and guidelines that the CDC has been telling us for months now, weren’t being followed.”

The school’s superintendent, Brian Otott, has insisted Watters’ photo is taken out of context, noting that such clustering only occurs for a few minutes between classes. Unspoken is such clustering then occurs repeatedly, every day.

Otott also defended the lack of masks seen in both posted pics, saying, “Wearing a mask is a personal choice, and there is no practical way to enforce a mandate to wear them.”

Watters did not respond to this comment. However, Twitter users have. They have challenged the logic of Otott’s shockingly stupid statement, noting school uniforms exist and even schools without uniforms have dress codes, including his.

“Wearing a mask is a personal choice, and there is no practical way to enforce a mandate to wear them,”
says the superintendent of a county where girls are pulled out of class for wearing a skirt that’s too short https://t.co/WPky4R8oSV

Georgia's Paulding County Schools Superintendent Brian Otott told the Washington Post that "wearing a mask is a personal choice, and there is no practical way to enforce a mandate to wear them." Here's their school district's dress code. https://t.co/1cXrHFawfU pic.twitter.com/qMXe2ySGfs

“Wearing a mask is a personal choice and there is no practical way to enforce them.”
I got bored and found their terribly designed and very specific dress code policy online, which they apparently enforce. https://t.co/bzgrtSSKG4 pic.twitter.com/5mtpgNnikD

As for Watters, her mother Lynne Watters is standing by her, and has filed a grievance with the school.

← As the Economy Sputters, Democrats and Republicans Are at an Impasse | Can We Talk About that Racy Jerry Falwell, Jr. Photo? →