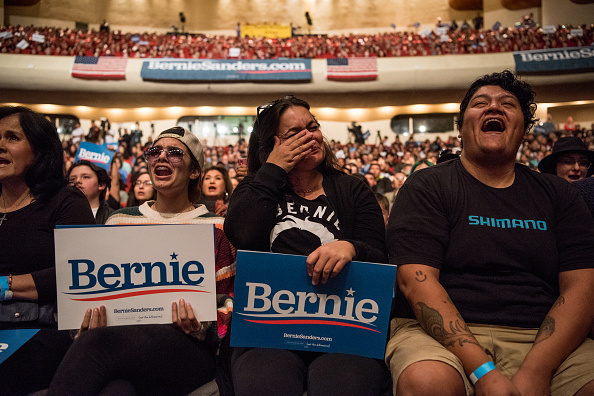 “If the Democrats nominate a Socialist, he’s going to get creamed by Donald Trump in November.”

“But will you vote for him?”

“Over Trump? Of course!” — Nearly Everyone I Know

It’s amazing the bubble I live in, and it takes a result like yesterday’s Nevada caucus — where Bernie won by an overwhelming margin — to remind of that. I remain baffled by the lack of support for Elizabeth Warren. I’m not mad at it. I am just baffled, because to me she and Obama are the best candidates the Democratic party have put forward literally since Kennedy. I am not alone in that thinking, either. I definitely have some good Bernie friends (on this site, even!), but most of the people I follow online — political journalists and entertainment journalists — are Warren fans. Most of the people I know in real life are Warren fans. My wife loves Elizabeth Warren. John Legend and Chrissy Teigen love Elizabeth Warren. Megan Rapinoe loves Warren. Mike Schur loves Elizabeth Warren. Based on the comments on this site, most of the readers here support Elizabeth Warren, and most of the readers here are 35-40 year old liberal arts majors with an ax to grind. Apparently, we constitute about 8-10 percent of the party.

However, the results in the election, so far, have reinforced that we do not reflect the rest of the Democratic party, must less the nation. I think that’s been sort of a hard pill for some of us to swallow. I don’t mean demographically necessarily (although, that, too). Broadly, we’re a little older, but we’re not super old. We’re a little whiter, and we’re a little more educated. I think that sort of makes Elizabeth Warren the Little Women of candidates: Smart, beloved by critics, well-liked by audiences, but ignored come awards time.

The Democratic establishment — and folks like Pete Buttigieg in his concession speech last night — keep trying to insist that Bernie is the Parasite of candidates. He’ll win the whole thing, but ratings for the Oscars will tank because he doesn’t have broad support.

The Fast and Furious movies are not my favorite movies, but when the alternative is The Joker, like most people I know, I’m gonna vote Bernie.

Meanwhile, if you haven’t seen this, it’s one of the best political ads of the season.

← Netflix's Reality Series 'Love is Blind' Is Gross and Predatory, Relies Too Much on Villains Jessica and Barnett | Put 'Ed' (That Tom Cavanagh and Julie Bowen Show) on Peacock You Cowards! →