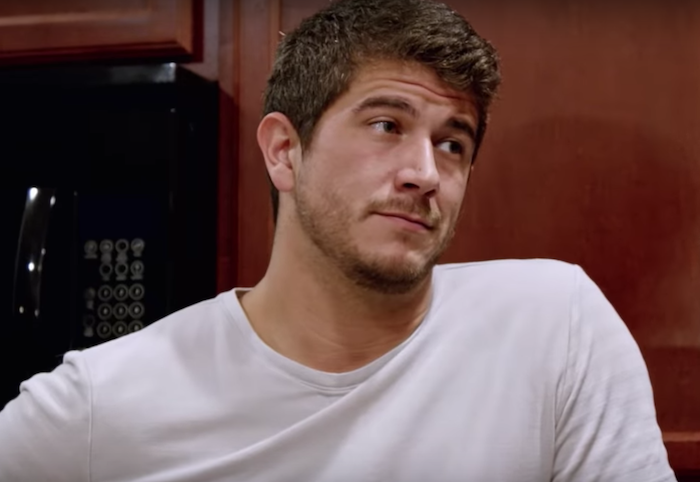 Netflix's Reality Series 'Love is Blind' Is Gross and Predatory

I’m sure sometimes you watch really trashy shows or movies and wonder to yourself, “Who is this for?” The answer is almost always me. I love trash entertainment. I always have—I was raised on a steady diet of Hard Copy and A Current Affair. I got so good at watching Maury in college that I knew his tells whether someone would turn out to be the father or not before he announced it (although I always preferred the bad tweens intervention episodes where they get scared straight after an afternoon at boot camp, and the “makeover my parent, please!” eps.) The point is, I’ve rarely, if ever, had to ask myself the question “Who is this show for?” in relation to a trash show because I always knew the answer.

However, I found myself asking, repeatedly, while watching Love is Blind on Netflix—“who is this show for?” because it is f*cking terrible. Atrocious. Worst of all—it’s very, very confusing and I’ll tell you why.

First, though, I’ll explain the premise (at least I think it’s the premise? I have no clue, tbh.) Love is Blind is a horror show in three separate acts. Act 1 is where strangers are brought to a building and kept sequestered by gender. The men all live together in one communal area, the women in another and they’re only allowed to interact with each other via conversations, one-on-one and in two separate rooms, which are oddly gendered—the men’s rooms are all hard lines with dark colors, the women’s rounded lines with softer colors. WTF? The idea behind this is that these conventionally attractive people will fall in love via conversation without ever having seen each other. In order to progress to Act 2, these couples have to f*cking get ENGAGED. Only I’m pretty sure that’s never explained, so when a couple gets engaged in episode one, you’re left screaming at your screen at the couple to pump their breaks. However, in retrospect, getting engaged quickly so you can get the hell out of dodge seems like the right strategy to have because not everyone will get engaged. In fact, most people won’t, only that is never explained. Ever. You’ll see people in the apartment, mingling with contestants that you maybe, sort of recognize, and you will never see them again. It’s so confusing. Also, in order to see what someone looks like, you have to get engaged first.

Act 2 is where the engaged couples go to a resort to bang it out get to know each other. Some couples won’t make it past this phase because it turns out getting engaged in a vacuum to a stranger on a TV show over the course of a few days isn’t really conducive to getting married. Go figure. This Act requires the least amount of context because it’s kind of self-explanatory (except for the part where if you break off the engagement you’re off the show) but it most definitely could have used a voice-over narrator because it skips around a lot and the people on the show are kind of boring.

Act 3 is where the couples move in together in an apartment building where the other couples are, and I think they try to live their normal lives? It’s unclear, but I have to imagine these people are working during this time because it appears the show sourced all the contestants from the Atlanta area so they can keep the “experiment” going—which is confusing because in the limited intros they did in the first episodes, people said they were from different areas? I don’t know. I’ll be honest, if I liked this show more, I probably would have tried to figure it out more, but I hate this show a lot. We’ll get to that in a moment.

Watching Love is Blind, you feel like you’re seeing people be slowly indoctrinated into a cult. They’re sequestered, they begin speaking in a lingo entirely their own, and they rush into monogamy to progress in this arbitrary system the producers have set up when there’s no cash prize at the end (as far as I can tell.) This frankly seems predatory because if there was a massive cash prize, the contestants of this show would be populated with people who know the score. Who are willing to game the system in order to get ahead, increase their social following, and get some club promotion fees while they enjoy their 15 minutes of fame. Those people are true mercenaries and it’s hard to take advantage of people like that. However, when your goal is true love, which is dangled like a carrot in front of people if only they’ll adhere to your rigid system, it seems much grosser. Especially if you take into account the type of person who would volunteer for this show is someone who probably hasn’t been that lucky in love.

This show sucks. It thinks its premise is strong enough to make you watch it, without ever having to explain it. Hosts Nick Lachey and Vanessa Minnillo are barely in it, so if you’re looking to them to explain anything you’re SOL. So, you’re left relying on a cast that frankly isn’t that strong and most likely has no idea what’s going on themselves because they’re swept up in a sea of infatuation that they’re mistaking for love. As a result of this, far, far, far, too much time is spent on the two villains of the show, f*ckboi Barnett and drama-rama Jessica, who in any other reality show would be relegated to occasional talking heads because their shit isn’t that interesting either.

Barnett plays around with a few ladies during the sequestered discombobulated voice Act, toying with their emotions, intimating that he’d like to get engaged with them only to act disinterested the following time they speak. He gets his comeuppance with the lady he gets engaged to when she reveals how atrocious her financial situation is in Act 2, and you can see him understanding the gravity of the situation if he were to marry a woman who refuses to pay off debt of any kind.

Jessica is one of the ladies Barnett toyed with in Act 1, only she walks away from Barnett opting to get engaged to another dude, who she then proceeds to mindf*ck at every possible opportunity. It’s exhausting.

The show spends far, far too much time on Jessica’s waffling and thinks it’s interesting when it’s not because she’s f*cking with someone’s emotions. Her poor fiancé is younger and has no idea how to frame Jessica’s behavior (because he doesn’t f*cking KNOW her) and keeps on insisting that he loves her and he would be devastated if they broke up.

Is some of this the show’s weird experiment creating a pressure cooker that heightens emotions? Yes, absolutely. However, as I said above, the people on this show aren’t your regular reality show contestants. There’s not a cash prize at the end of this to keep them keeping on, gritting their teeth and playing the part. All that’s keeping these people hanging on is the vague promise of marriage and the notion that if they were able to fall in love with someone’s personality without the physical stuff getting in the way that it might be true love—and that they are loved for the same reason in return. This is very f*cked up. Their own happiness and emotional fulfillment is the prize for this show, and you know what? As much as I love trash, this is a whole new basement-level-of-the-trash-emporium that is reality shows, and it’s just not for me.

This show sucks. From a purely producing level, it requires much more context to make it seem cohesive. From a human level, the concept is gross and predatory. I have no idea who this show is for but it definitely is not me.