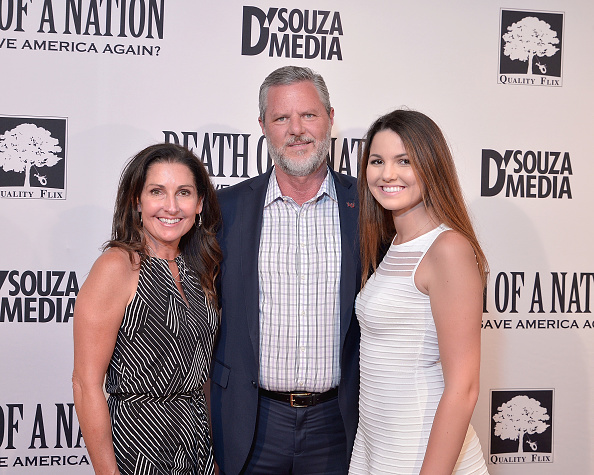 Becki Falwell Allegedly Went Down On Her Son's Friend and Bandmate

Oh, Becki, Becki, Becki. Days after Jerry Falwell, Jr. officially resigned as the President of Liberty University after his wife’s seven-year affair with a pool boy who let Jerry watch him and his wife have sex surfaced, another affair is now coming out. A former Liberty University student reveals that in 2008, when he was 22, he was staying in the Falwell home after band practice with the eldest Falwell son. While in bed that night, Becki Falwell jumped into bed and performed oral sex on him.

The former student says that Becki was the aggressor, but that he went along with it. However, after he tried to reject her, she allegedly continued to pursue him through offers of gifts and messages on Facebook Messenger.

Politico obtained some exchanges between the former student and Becki Falwell. They paint a fairly clear picture of Becki Falwell refusing to take no for an answer.

Here’s the former student, via Politico:

“One night [in August or September], we were up till one or two, and we went back to his room. We had a decent amount of Jack Daniels,” the former student said. He remembered walking into the guest room, just as he’d done many times, closing the door behind him, and preparing the bed.

After some prodding, he coaxed Falwell into leaving. He slept, woke up and acted like things were normal.

A few nights later, he stayed the night again. Again, Falwell came into the guestroom where the then-student was in bed.

This time, she was more aggressive. The former student remembers that Falwell climbed into bed with him, and quickly took down his pants.

“I was like, ‘uh, what are you doing?” the former student said. Falwell then proceeded to give him oral sex.

Again, Becki and Jerry are free to have all the [consensual] sex they want, with as many people as they’d like, with as many others watching as they desire. Good for them! The problem is the hypocrisy. Liberty University students are not allowed to drink or even dance, much less engage in premarital sex. Becki, meanwhile, was out there banging away, while Jerry admonished those who engaged in similar behavior.

Also, the consensual nature of that blow job is not entirely clear. Also also, she went down on her son’s bandmate. That is not cool, Mom. NOT COOL.