As Expected, Trump Went Ballistic After Twitter Fact Checked Him

Yesterday, after the husband of Lori Klausutis wrote a letter to Twitter asking the platform to delete a nutjob conspiracy theory about Joe Scarborough murdering Klausutis, there was some suggestion that Twitter would start to fact check the President. I thought this was a perfect idea — even better than suspending him from Twitter because it would mean many of his tweets would be undermined by accurate information from the very “fake news” sources that Trump hates.

I didn’t think it would happen, and as I wrote, if it did, Trump would lose his mind.

Well, it happened, and guess what? Trump lost his mind. Twitter hasn’t yet fact-checked Trump’s conspiracy theories about Lori Klausutis, but yesterday after Trump raised issues about mail-in voting again, Twitter added its first fact-checking label to his tweets.

Clicking on the label brings up this page. 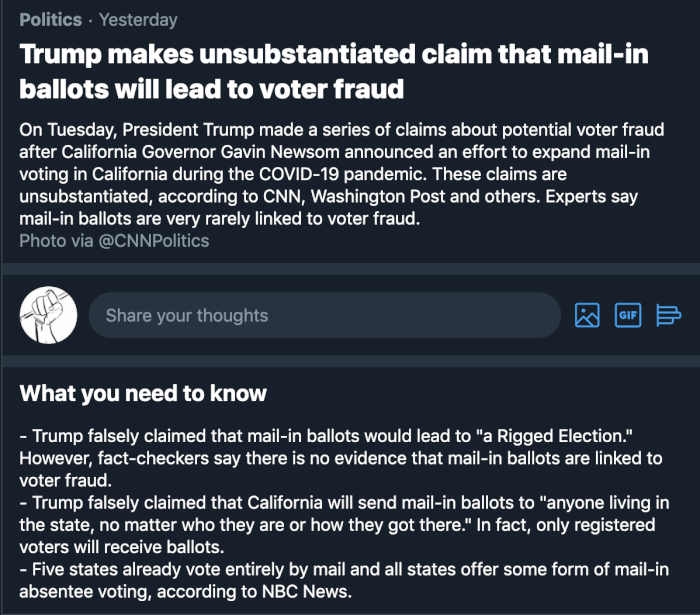 ….Twitter is completely stifling FREE SPEECH, and I, as President, will not allow it to happen!

In the hours since, Trump has celebrated the loss of journalism jobs, he has touted the stock market numbers even as unemployment approaches 20 percent, he’s shouting OBAMAGATE into the wind again, and now he is threatening to shut down social media.

….happen again. Just like we can’t let large scale Mail-In Ballots take root in our Country. It would be a free for all on cheating, forgery and the theft of Ballots. Whoever cheated the most would win. Likewise, Social Media. Clean up your act, NOW!!!!

The only outcome I want to see here mutual self-destruction! Of course, Twitter is a private company, and unless the federal government decides to regulate it (and Facebook) like a public utility (a very anti-Republican thing to do), Jack Dorsey can continue to do whatever the hell he wants. What I wish he would do is fact check those “Psycho Joe” tweets and the ObamaGate tweets because Trump would completely lose it. He would go off the deep end if Twitter repeatedly undermined his conspiracy theories, and if Jack Dorsey could drive Trump off of Twitter, it would be the greatest act of capitalism in the last four years.

← What's The Twitter Meme 'Dear Men, What Is Preventing You From Looking Like This' About? | 'Snowpiercer' and 'Run' and a David Ury-Themed Game on Podjiba! →