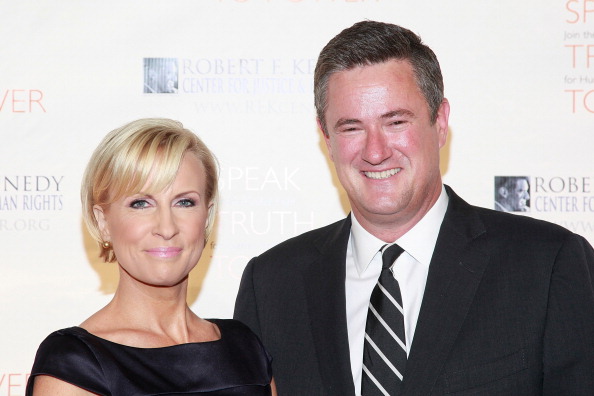 You know what is “fascinating,” according to journalist Jon Sopel of BBC North America? That “entertaining” spat between Donald Trump and Joe Scarborough, where Donald Trump is accusing the MSNBC host of murdering a 28-year-old staffer nearly 20 years ago.

This is fascinating. On one level this is an entertaining spat between @realDonaldTrump and @JoeNBC - a well known TV anchor and persistent critic of potus. But the peddling of a conspiracy theory that the TV host might have murdered a former staffer takes it to a whole new level https://t.co/haCheLsxFQ

You know who doesn’t find it “entertaining”? Timothy Klausutis, the husband of Lori Klausutis, the Scarborough aide who, in 2001, hit her head on a desk and died after losing consciousness from an abnormal heart rhythm (Klausutis’ death was ruled an accident; Scarborough was thousands of miles away at the time of her death). Timothy Klausutis wrote a letter to Twitter CEO Jack Dorsey reasonably asking him to remove the Trump’s “entertaining” tweets. “Please delete those tweets,” Klausutis wrote. “My wife deserves better.”

“President Trump on Tuesday tweeted to his nearly 80 million followers alluding to the repeatedly debunked falsehood that my wife was murdered by her boss, former U.S. Rep. Joe Scarborough. The son of the president followed and more directly attacked my wife by tweeting to his followers as the means of spreading this vicious lie. I’m asking you to intervene in this instance because the president of the United States has taken something that does not belong to him — the memory of my dead wife — and perverted it for perceived political gain.”

Timothy Klausutis, the widower of Lori Klausutis, has written to Jack Dorsey asking him to delete tweets by President Trump spreading a debunked conspiracy theory about his late wife’s death and @JoeNBC

Twitter, alas, has declined to delete the tweets. “We are deeply sorry about the pain these statements, and the attention they are drawing, are causing the family,” a spokesperson for Twitter said. “We’ve been working to expand existing product features and policies so we can more effectively address things like this going forward, and we hope to have those changes in place shortly.”

I’m not entirely sure what that means, but there is some suggestion that Twitter is working to “label the tweets as false and link to myriad high-quality information and reporting that refute the tweets’ sinister insinuations.” This would actually be amazing and, in some ways, even better than banning Trump, because nearly every one of his tweets would be labeled as false with evidence to prove why they are false. It would drive Trump insane if his tweets were accompanied by links to “fake news” organizations refuting him. Instead of kicking Trump off Twitter and making him a martyr, such a move might actually drive Trump off the platform himself rather than have his tweets undermined.

It would be amazing, which is why it will probably never happen.

← 'Mythic Quest's Quarantine Episode Nailed Life In Lockdown, The Hilarious and The Heartbreaking | This Acoustic Cover of System Of A Down's 'B.Y.O.B' is Pure Perfection →