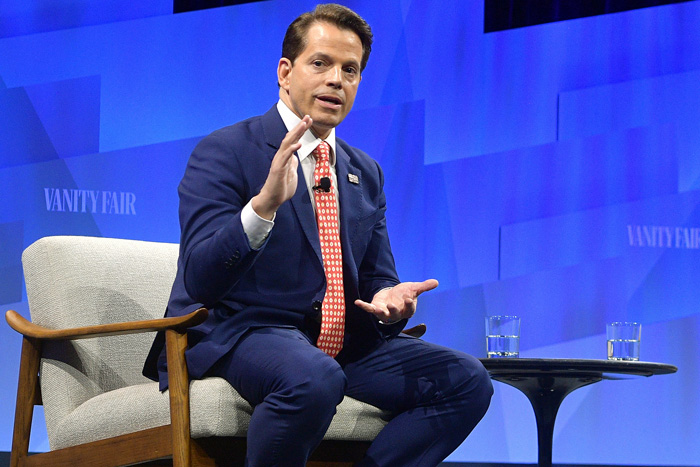 “He’s all porcini but-a no stugots, know what I mean?”

(My deepest and sincerest apologies to the Italian-American community for that caption and whatever other stupidity is sure to follow. It’s gonna be real dumb.)

Back in August, Anthony “The Mooch” Scaramucci became a full-fledged member of #TheResistance after he could no longer look himself in the eyes and support the never-ending parade of atrocities committed by Donald Trump. — Ha! Just kidding. Trump made fun of him on Twitter. That was The Mooch’s Rubicon.

However, with impeachment becoming an increasingly visible light in the distance, it might not hurt to welcome defectors, even if those defectors were willingly cheering on the president and talking about his jump shot while children were drinking out of toilets. We can hash that out later. In the meantime, The Mooch seems to be attacking Trump with just as much zeal as he used to defend his former Orange Messiah, and The Mooch isn’t looking to be absolved for that fact. Although, he does have a very white guy approach to second chances — “If you’re resilient and you own your mistakes, there’s second acts in America,” he recently told Gabriel Sherman. — and I’m definitely playing right into that with this post. Sonofabitch.

While speaking at the Vanity Fair New Establishment Summit, The Mooch made some very bold predictions about Trump’s fate, and I genuinely have no clue what he’s trying to pull here. My gut tells me that The Mooch is saying anything and everything to keep The Mooch’s name on our lips, but he’s also an extremely wealthy Republican with deep connections in the finance world, so he could very well have inside info on a sea change. I’d say it’s a 70/30 split, but I’m probably being a bit too generous because The Mooch is leaning heavy into Mitch McConnell growing a spine. That said, there have been notable flashes that Mitch might be hiding a backbone in that shell of his, so who the hell knows at this point?

“In the next three to six weeks, there will be more damning information related to the president” released, Scaramucci predicted. “He’s aware of it. I believe that [Mitch] McConnell will eventually go to him and say, ‘Hey, man. You’ve gotta take one for the team…you’ve gotta go back.’ He’ll probably end up back at Mar-a-Lago or something.” Though he says he hasn’t had a personal conversation with McConnell, who “plays his cards very close to the vest,” Scaramucci said he has “talked to a legion of people” who see the tables beginning to turn.

Not only does The Mooch think McConnell will force Trump out, but the move will happen in time to choose a new Republican ticket for 2020. In fact, The Mooch has already made plans to prepare Republican voters for whoever this new mysterious candidate might be, because the important thing is, nobody votes for that socialist cooze who needs to stick to making gabagool with the other broads.

With the 2020 race unfolding, Scaramucci says he’ll be hitting the campaign trail to talk up gun control policy and lobby suburban women to vote against Trump. And, of course, voting against the president himself. Would he go so far as to vote for, say, Elizabeth Warren? “I don’t want to answer that hypothetical,” he parried, “because I think there will be another candidate.” (Warren’s wealth tax, he says, is “un-American.”) At this point, however, “it’s sort of ABT—anybody but Trump.”

As for who this Republican savior might be, I can’t imagine who Anthony Scaramucci might be touting while visiting lonely housewives across the country. It’s a mystery! But if I had to take a shot in the dark here, I’m guessing it’s probably this guy below, even though I’m pretty sure a move like that falls under the category of sucking your down dick. Call me old-fashioned.

Dick jokes aside, The Mooch is a walking visual aid that Trump will turn on anybody at any moment if they fail to lick a single inch of his boot and with a smile on their face, so his message that loyalty to Trump means jackshit is not insignificant during a time when the president’s power is seemingly waning. I say seemingly because as Dustin noted in his painstakingly thorough Trumpdates, there is a solid block of Fox News watchers who have signaled loud and clear that there is nothing that will make them turn on the president. Nothing. On top of that, a quick stroll through the Facebook comments of my local paper was sloppy with Trumpers who think Matt Gaetz’s Dumbass Braveheart Pizza Party was the bee’s knees, so goddammit.

But if defectors like The Mooch can slowly chip away at that wall of dumb by going door-to-door to knock Trump off of the ticket, do we turn away that help because The Mooch was as sycophantic as it gets not even two months ago and is still a Republican? I honestly don’t know. On the one hand, a new candidate this late in the game is probably f*cked right out of the gate. On the other hand, Donald-ass Trump won the last election, so God knows what kind of nightmare could happen this time? Ben Shapiro might become our first angry dwarf president. Literally nothing is off the table. (Does anyone else’s stomach hurt?)

Anthony Scaramucci on Donald Trump: “He may or may not have early-stage dementia, but he definitely has early-stage fascism … This guy has the self-esteem of a small pigeon.” #VFSummit pic.twitter.com/eAYUdI6Kv6