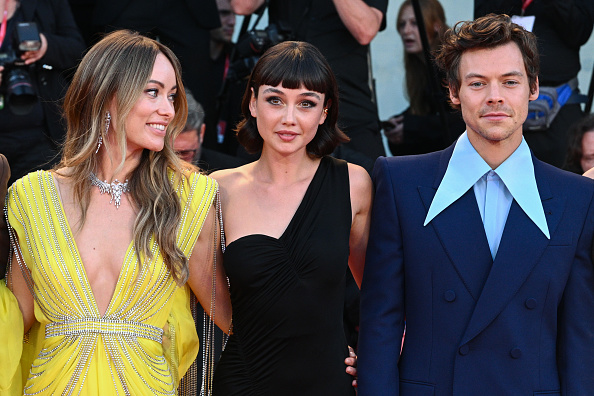 Olivia Wilde and Harry Styles are “taking a break” because he’s on tour and she’s “focusing on her kids,” which is code for: They broke up because the Don’t Worry Darling press tour is over and it’s not worth all the bullsh*t. (People)

How is it already the weekend again? This week flew! Thank you for the nice comments welcoming me back last week. I started to reply and then I got distracted by, I don’t remember, something shiny probably, and then FLAMMO (might be an actual real word, I don’t know. I’m not looking it up.), it was the weekend again!

Denise Richards and her husband (and their truck) were shot at by another driver in a road rage incident. - (Celebitchy)

The jury on Danny Masterson’s long-overdue rape trial says they are deadlocked. The judge told them they don’t get to be deadlocked this soon. - (Hollywood Reporter)

Last week I posted about “Winter Coating” and some of you thought that idea didn’t sound so bad. This is for you, then. Here are some ideas for ways to get back with that ex for some fa-la-la-la-la-ing or whatever. - (Elite Daily)

Gabrielle Union looks back at her most iconic roles. Let’s look back and reminisce with her, shall we? - (Elle)

From Petr, “Nah, come on, man!” Oh, the tears! If Twitter’s still around when you read this, you really must watch. - (Twitter)

I forgot all about Aubrey O’Day! Oh, girl, please pick better boyfriends. Be nicer to yourself!- (Dlisted)

I love this comment diversion over on Go Fug - What Did You Have On Your Walls As A Teenager? The only posters I can remember were of Duran Duran, but I basically papered my locker with pictures of Rob Lowe and Matt Dillon. Why, yes, I am geriatric, thank you for noticing! - (GFY)

Growing up in the ’70s and Catholic school kind of ruined plaid for me. Jodie Turner-Smith may have just fixed that. Gaaahdaamn! - (T&L)

The new Doctor has a new Companion - (AVC)

Evangelicals got what they wanted with Roe being overturned, so they’re feigning hurt, ignorance, and dismay at having “been used” by Trump, now that they see what he’s really like. Uh, huh. Sure. You’re just now seeing clearly what he’s shown you he was all along? - (TMS)

For those who celebrate Christmas, when do you put up your decorations and/or tree? Is now too early? - (Scary Mommy)

Have a lovely week and I hope you also get some cookies!


← HBO's 'The White Lotus' Season Two Review: This Vacation Sucks | Episode 11 Recap: Someone Got 'Star Wars' All Over My 'Andor' →