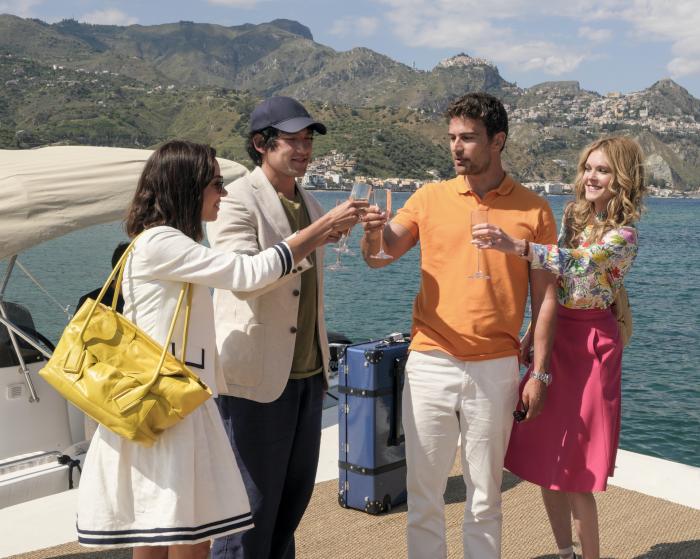 The last time that I wrote about The White Lotus was immediately after the series premiere, when the series showed a great promise, one I believe it ultimately fell short of by season’s end. Despite this, the show garnered five Emmys, including Outstanding Limited Series and Outstanding Supporting Actress in a Limited Series for Jennifer Coolidge in what will likely be a career-defining performance for the longtime character actor. Soon after it was announced that creator Mike White was in the midst of planning a second season, though considering the rather dramatic (and deadly) finale, it was difficult to imagine where another season could possibly go.

Apparently, the answer is Sicily, in Taormina on the northeastern coast. Save for Coolidge’s rich but deeply troubled Tanya, this season features a whole new group of resort guests, each with their own array of problems that only an extended period of time with a licensed therapist could possibly amend. It’s a similar format as the previous season, i.e. rich people going to an “exotic” vacation destination only for havoc to strike, only this time it’s significantly less entertaining.

Season one missed the mark in a number of ways, especially the lack of perspective and manipulation of the Hawaiian locals—one of the reasons for my initial excitement was the potential plotline for new hotel employee Lani (played by Jolene Purdy), only for her to disappear almost entirely, with the focus placed on the non-native hotel manager instead, which garnered Murray Bartlett an Emmy for his role as the doomed Armond—an issue that our Comedy Editor Dan Hamamura has discussed on more than one occasion. It did, however, succeed when it comes to lampooning the solipsistic nature of wealthy people.

This latest season has, so far, attempted to do the same, yet there’s none of the bite that made season one as watchable as it was. There’s little tension happening throughout most of the guest storylines; the male members of a family exploring their Sicilian roots offers nothing of note except to provide a beleaguered assistant something to do and an ambitious sex worker and her friend a chance to infiltrate the resort. The most interesting dynamic is between two couples, the intellectual but moody Harper and Ethan (Aubrey Plaza and Will Sharpe, respectively) who are vacationing with the blissfully oblivious Cameron and Daphne (Theo James and Meghann Fahy, respectively). Ethan’s desire to impress Cameron is at odds with Harper’s near-instant dislike for the couple. Plaza’s best known for her acerbic dry humor, which is distilled here down to a taut hyper-self awareness as she tries (badly) to tamp down on her disdain for Cameron and Daphne for the sake of her flailing marriage. It’s the closest thing to an engaging storyline here, though between Harper’s brand of liberal “mean girl” passive-aggression and Cameron’s goofball machismo (James, who I’ve usually found unbearably boring save for that one weiiiird tv moment, is at his liveliest here), the foursome bring a level of cringe that is almost too much to handle at times.

Beside The White Lotus resort chain, the only tie to the first season is Coolidge’s Tanya McQuoid along with her instantaneous love interest, Greg (Jon Gries). As strong as Coolidge’s performance was in the previous season, it’s not enough to justify Tanya’s presence here. What was once an intriguing if sad look at an empty shell of a human pursuing any and all things in an attempt to fill herself is flattened into a person so pathetic that it nearly inspires revulsion. The only reason to root for her at all is due solely to Greg’s overwhelming awfulness, but it’s nowhere near enough to want to continue checking in on a character whose story should have been left finished.

Today, HBO has announced the network would be renewing the show for season three, and all I can do is wonder why. Season two is tiresome enough that the thought of going through the same formula yet again sounds exceedingly dull. I will likely continue watching this season due to my dedicated journalistic integrity, but this is almost certainly a trip I don’t wish to go on again.

Kaleena Rivera is the TV Editor for Pajiba. When she isn’t being caught completely off-guard by the recent discovery (meaning as of this writing) that Jon Gries played Uncle Rico in Napoleon Dynamite, she can be found on Twitter here.