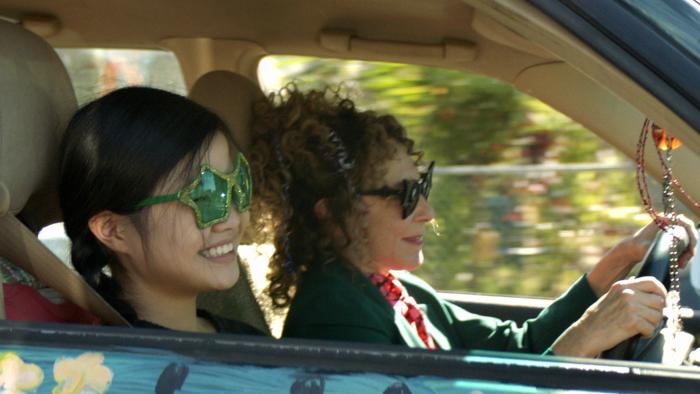 Review: 'Marvelous And The Black Hole' Delivers A Charming Coming-Of-Age Comedy Plus Rhea Perlman As A Snarky Magician

Teen angst is often a concept that gets condescending eye rolls from grown-ups, as if it’s a minor suffering, a childish trial. Yet to those going through it, this developmental agony feels eternal, all-consuming, and unrelentingly dark. It is a black hole that threatens to gobble them up, while their elders chirp about this being “the best years of their lives.” This generational conflict is often why coming-of-age stories are powerful and essential. They remind us grown-ups of the urgency and ache of teen angst, and they provide the young with a reflection of their pain, showing they are not as alone as they may feel. Into this complicated legacy strides Marvelous And The Black Hole, a scrappy and earnest charmer.

After writing for coming-of-age cartoon series like Steven Universe Future and Adventure Time: Distant Lands, Kate Tsang has channeled her imagination into her feature directorial debut. Marvelous And The Black Hole kicks off with a familiar scene, one recently rolled out in Concrete Cowboys: a sneering child hero is introduced sulking outside the principal’s office, as their single parent flusters over what’s to be done with them. With summer opening before her full of opportunities to further infuriate her widowed father, Sammy Ko (Miya Cech) is given two options: pass a course at the community college or be sent away to a camp dedicated to rewiring problem children into perky overachievers. However, happenstance has other plans for her, throwing her in the path of a smirking magician known as Margot The Marvelous (Rhea Perlman).

Margot says she sees a lot of herself in the brow-furrowing kid, so takes Sammy under her sequined wing. Along with teaching Sammy how to handle cards, care for rabbit sidekicks, and turn personal tragedies into wonder-inspiring spectacles, Margot offers life lessons with a bit of razzle dazzle. Perlman, who defined surly charm with her years on Cheers, shows a softer side with a warm smile and infinite patience for a girl seeking self-sabotage over solace. She’s a joy to watch, and it’s easy to see how Sammy—even rooted in her sadness—can’t resist her.

Newcomer Miya Cech has a trickier role, as Sammy’s guardedness means lots of frowns that lend to woodenness. Tsang’s script ushers us into the secret realms of Sammy’s mind with fantasy sequences whimsical and playfully horrid. When reminiscing about her late mother, Sammy is transported to a favorite bedtime story, that of the Moon Goddess and her rabbit. The colorful contemporary setting is abandoned for a black-and-white recounting of this Chinese Legend with film stock imperfections, jaunty physicality, and old-school practical effects that nod to pioneering filmmaker Georges Méliès. When Sammy imagines carnage—enacted against her dad’s new girlfriend—there will be blood and a chainsaw. Yet, the tone is cartoonish and daffy, not disturbing, suggesting that Sammy’s dark side isn’t dangerously dark.

Such flourishes are fun, as is Perlman and an appearance from Jonathan Slavin, who comedy fans might remember from Better Off Ted and Santa Clarita Diet. Overall though, Marvelous and The Black Hole suffers from clunky plotting. Tsang shows a flare for details, dealing out DIY tattoos, a battered but beloved audio cassette, and Pocky, “a worthy snack.” She delivers a clear portrait of a loving family trying to find balance, dedicating scenes to developing Sammy’s nerdy sister (Kannon) and concerned dad (Leonardo Nam). It’s a solid base for a story of cross-generational friendship, sparked not by common interests but common pain. Sadly, the actual development of Margot and Sammy’s bond is tossed into a couple of montages, which are flashy but not profound. Instead, the movie’s most poignant moment is dealt to Slavin, with a monologue that he delivers well, but still feels ill-suited for!

Yet, it’s hard to deny the feel-good delights of Marvelous and The Black Hole. Tsang takes seriously Sammy’s angst, recognizing the source of her anger, then giving it an outlet through Margot and magic tricks. Perlman is a splendid showman, doing sleight of hand and heart-to-heart talks with equal elegance. Cech is a bit stiff, but even that could be argued to work in favor of the film, as Sammy is a kid itching in her could-be identity as Bad Egg. The shortcuts to their friendship are a missed opportunity, which hurts the flow of the film and its impactfulness. Nonetheless, it offers a finale that is fittingly quirky and heart-warming. So, give a chance to Marvelous and The Black Hole.

Marvelous and The Black Hole made its World Premiere at Sundance 2021. For more on the festival and how you can enjoy it from home, check their website.

← Review: 'A Glitch in the Matrix' Ponders The Really Real, Like Whoa | 5 Shows After Dark: 'The Long Song' Premiere PBS, 'The Lady and the Dale' Premiere on HBO →