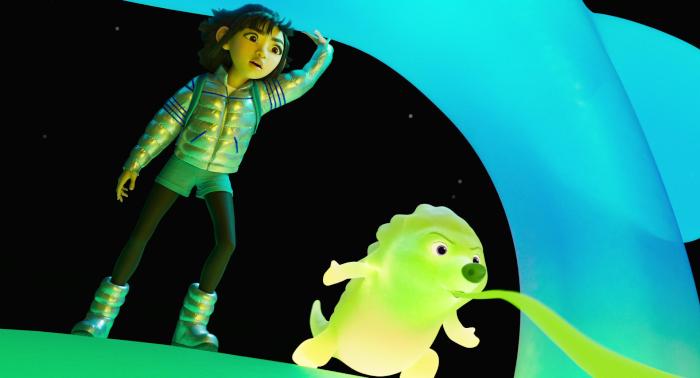 Now on Netflix: 'Over The Moon' Brings New Life And Coping Tools To A Chinese Legend

When faced with the ravenous gnawing of grief, some bury themselves in a project. For one remarkable little girl, that project is building a rocket to the moon, so she might meet its goddess. A Chinese legend is brought to “ultraluminary” new life with Netflix’s animated musical Over The Moon, which has a modern twist thanks to the collaboration of Janet Yang, Glen Keane, the late Audrey Wells, and an all Asian cast that boasts Sandra Oh, John Cho, Phillipa Soo, Kimiko Gmidlenn, and Margaret Cho.

Over The Moon begins with a Chinese family of three, gathering under the moonlight to share a story long treasured. Chang’e was a beautiful young woman in love with an archer, who she planned to spend eternity with—literally. However, a cruel twist floats her to the moon, where she will live forever. Back on Earth, he remembers her annually with a presentation of fruits and mooncakes, which—as the story goes—gave rise to the Autumn Moon Festival.

This story of love and loss is a favorite of young Fei Fei (Cathy Ang), a girl with a big imagination and a sharp intellect. In Act One, we watch her grow, cuddling with her mother, racing around the family’s kitchen, and playing with her bunny Bungee. She will grow too fast, as a gentle montage shows her mother (Ruthie Ann Miles) fade then disappear. This loss is hard enough. When her father (John Cho) considers moving on with a new love (Sandra Oh), Fei Fei resists. She becomes convinced that her father has forgotten about true love. To remind him, she will fly herself to the moon and meet Chang’e (Hamilton’s Phillipa Soo).

While this ingenious girl is able to build her own rocket from paper lanterns, fireworks, and liberal use of her dad’s credit card, nothing else goes quite to plan. On her adventure, she not only finds that the moon goddess is more diva than divine, but also crosses paths with giant frogs, flying lions, talking treats, and a shape-shifting glow-worm/hedgehog called Gobi (Ken Jeong). With the help of these unusual allies and her pesky could-be brother Chin (Robert G. Chiu), Fei Fei goes on an incredible journey of heroics and healing.

In a special presentation event online, Netflix offered the press a chance to see the film early and hear from some of its team about how Over the Moon was created. It began as a passion project of executive producer Janet Yang, who dreamed up the concept of a contemporary Chinese girl rocketing her way to meet the glorious moon goddess. From there, Yang chose screenwriter Audrey Wells (The Hate U Give) to flesh out the story. Unbeknownst to Yang, Wells had been diagnosed with cancer. With her impending death in mind, Wells wrote this story of a daughter’s love and longing for her lost mother, providing a path for her own daughter to move on.

To helm this tender tale, Yang selected Glen Keane, a living legend in American animation, who has had a hand in creating The Little Mermaid, Beauty and the Beast, Aladdin, Tangled and Dear Basketball, the Academy Award-winning animated short. Yang had seen Keane give a speech on the importance of thinking like a child, and she was so moved by it that she pitched him Over the Moon. From there, Keane visited China, walking its streets and being invited into family homes to construct the first act of this gorgeous film. 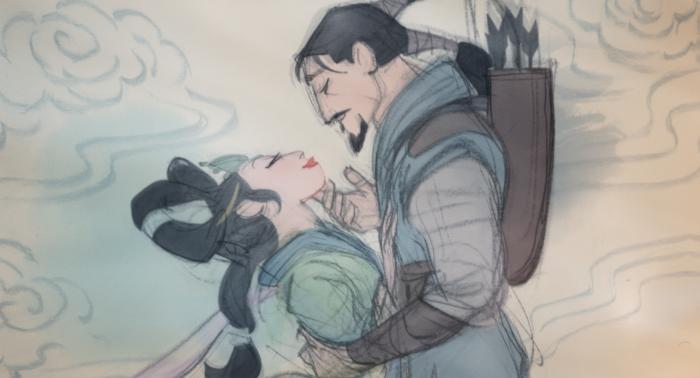 Keane has spent decades mastering visual storytelling in animation, and that expertise is clear in every frame of Over the Moon, which employs different styles to set apart its realms. A 2-D style presents the legend of the moon goddess as a pencil sketch come to life. The rest of the film is a more standard 3-D CGI style, as seen in movies like Tangled or Frozen. However, Keane shows his skill with visual characterization not only in gentle details (like Fei Fei’s chunky ‘do that screams DIY haircut), but also with an eye for how children move. It’s in the flourish of a playful step, the loss of balance to a burst of energy, and the slight tremble as a brave girl tries not to cry. These kids are cartoons but they move in ways so familiar they seem like flesh and blood. Then, Fei Fei and Chin take off to a new world, where the colors aren’t the warm hues of home, but candy colors so eye-popping they almost feel like an attack.

Within these worlds, there are simple visual splendors that must have been incredibly difficult to nail down. For instance, a sequence where the family makes moon cakes together. Magically, a bunch of pixels builds a feast that looks as lovely and mouthwatering as the many meals in Hayao Miyazaki movies. There’s Fei Fei’s rocket, which looks like a giant paper lantern shaped like a rabbit, glowing and adorable, with hidden power within (much like it’s radiant little rocketeer). Then, there’s the silver puffer coat Fei Fei chooses for her spacesuit, which reflects all the colors of the moon and its vibrant inhabitants.

Honestly, the animation alone is enough for me to want to watch this movie over and over. Yet there’s more here than just the superb style of Keane. Wells has written a script of substance that offers an adventure full of fun, silliness, and family-friendly suspense. There are quirky creatures, explosive musical numbers, a ping pong/rap battle, and profound emotional depth. When Fei Fei finds the Chamber of Exquisite Sadness, sure, its meaning is not subtle, but this is a kid’s movie. It’s meant not only to amuse the children with its japes and jams, but also give them a guide on how to process loss instead of being swallowed up by it. I can forgive the heavy-handedness when I imagine Over The Moon’s message clicking for a kid that needs it. 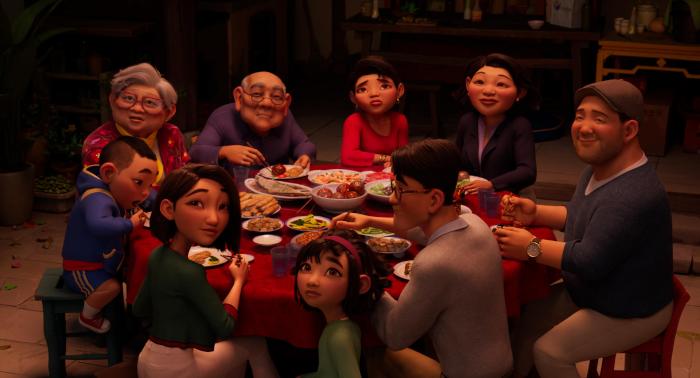 Bringing these characters to vivid life is a stellar cast. Newcomer Cathy Ang sings her heart out as a determined girl shooting for the moon, and she brings a devastating vulnerability as a little girl lost. Robert G. Chiu is perfectly cast as a rowdy but loving little brother, who careens into walls and the final frontier with equal relish. As Fei Fei’s relatives, Margaret Cho, Kimiko Glenn, Irene Tsu, and Clem Cheung create a warmly bombastic soundscape that swiftly envelops audiences in the comforting yet chaotic embrace of a family get-together. John Cho and Sandra Oh give delicate performances as parents gently tugging their kids into a new idea of family. In live-action, Crazy Rich Asians’ Ken Jeong can come off cartoonish, pitching himself headlong into a bit. However, as Fei Fei’s alien sidekick, he manages to balance his go-for-broke bonkersness with a deep-seated sweetness, which works to mellow out the potential obnoxiousness. Finally, there’s Phillipa Soo, who not only breaks into Lady Gaga-like pop anthems, but also must play moon-rattling heartache. She is radiant, as needed and expected.

Overall, the journey of Over the Moon is wonderful. Admittedly, the pacing gets a bit wobbly as Keane gets carried away with one out-of-this-world set piece after another. Though the songs are fun, few proved memorable like the Disney anthems that you can’t let go. Yet it’s easy to get caught up in the rollick, the rhythms, and the resounding heart of this beautiful, bouncy, and bittersweet film.

Over the Moon debuts exclusively on Netflix on October 23.