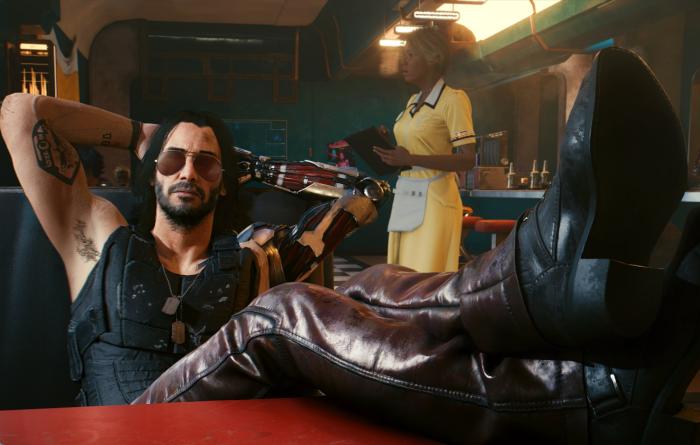 Well, holy sh*t. I can’t actually remember something like this happening: A triple-AAA game, selling extremely well and hyped by many pre-release to be a contender for game of the year, has now been pulled from one of the online marketplaces selling it.

Cyberpunk 2077—a game that I am personally enjoying while also being intensely aware of its issues—has been removed from the PlayStation Store by Sony. This goes for the current gen PlayStation 4 version, as well as the next gen PlayStation 5 version. Wow.

As per a statement on the official PlayStation site:

Once we have confirmed that you purchased Cyberpunk 2077 via PlayStation Store, we will begin processing your refund. Please note that completion of the refund may vary based on your payment method and financial institution.

[T]he decision to remove the game from Sony’s online store was made together with the platform holder, and adding that while the game has been pulled from the PlayStation Store, “Gamers can still buy physical versions of the game in retail and mail order stores. All copies, whether digital or physical, will continue to receive support and updates from the Company.”

The whole Cyberpunk 2077 release saga has been fascinating to watch because it reveals a hell of a lot about the state of the modern day gaming industry. And none of it is great.

On the one hand you have a corporation forcing their employees to work mandatory overtime despite promising not to do this, all to release a game that quite clearly isn’t finished, and that doesn’t run well at all on the systems that a large proportion of the public are going to be able to buy it on. Compounding the latter issue, review copies of the PlayStation 4 and XBox One games were only given to reviewers a few days before launch, and no footage of the game running on those systems was released prior to launch. Additionally, reviews for the PC and next generation versions were embargoed until just a few days before launch. Review embargoes by themselves are nothing new—though that doesn’t mean there isn’t plenty to criticise about the practice—but when combined with all the information about performance issues and expectations going unmet that the Cyberpunk 2077 write-ups have been putting out there since the moment they could, it all adds up to a picture of a company knowingly trying to manage the fallout from a flawed release in what doesn’t look like the most honest ways: Rake the cash from pre-orders in, worry about the backlash later.

On the other hand you have the extremely toxic, whiny, impatient, entitled, and abusive culture that persists among the loudest members of the ‘gaming community’. It should be said that the vast majority of people who play video games do not get involved in the rotten behaviour that we so often see online, but there is a vocal contingent of aggressive, overwhelmingly white male, ‘gamers’ who do, and who have given the entire hobby a bad name. Even leaving aside the purely bad faith actors of something like ‘gamergate’, the discourse in the online gaming community is all too frequently completely unacceptable, devolving into racism, sexism, and violent threats at the drop of a hat—if it’s not already starting there. It often reaches completely bonkers levels, with developers receiving death threats from ‘gamers’ who feel wronged by some aspect of a video game, and review outlets getting the same treatment when their opinions on games don’t line up with what some ‘gamers’ demand.

The senior game designer tweeted this out today. Please, be respectful to the developers no matter how disappointed you are. They are human beings just like us with lives and feelings. We should all support CDPR in their efforts to fix the games issues during these hard times. from r/LowSodiumCyberpunk

There was an excellent piece in Kotaku a few days ago that addressed the dynamic that has developed between players and developers. It touched on the unhealthy, parasocial relationship that a lot of ‘gamers’ develop with big companies:

Of course, the far bigger issue is that a loud proportion of Cyberpunk 2077 purchasers (and indeed any other big-name game) don’t want reviews at all. They want reassurance. They paid for this game nearly two years ago, for whatever illogical reason (“I’m supporting the massive multi-million dollar company!”), for no gain, no extra content, no early access, no bonus items, and they want to know they did the right thing. And, for some, paying for a years-away game is just the start of the sort of self-imposed brainwashing that causes someone to switch from being A Person Who Pre-Ordered A Game They Want To Play to being A Fan. They’ve not only irrationally invested money, but since then have been investing their emotion. They’ve read everything they can find to read about it, hooked up to the PR drip-feed of information that comes both direct from the publisher and the compliant sites that report it all to their readers. This emotional investment mutates into a form of loyalty, a belief that they are now on the game’s side, and a slight against the game is now a slight against themselves.

This is the same phenomenon that sees hordes of online individuals jumping to the defence of Disney, or Marvel, or any other such huge corporation producing entertainment properties that those individuals get themselves emotionally attached to. When those properties get criticised, or ‘attacked’ in the warped siege mentality prevalent in such circles, certain sections of the fandom then feel compelled to act as unpaid public relations warriors on behalf of that property, and often the corporation that produced it too. The huge corporation which only really cares about taking their money. Just to be clear: There’s nothing inherently wrong with developing a bond with somebody’s creative output. Just don’t let it become unhealthy. And certainly don’t use the excuse of ‘defending’ that output as a cover for engaging in abuse. And double certainly don’t use whatever little precious time you have on this planet savaging people for the apparent crime of not liking your particular brand of mass market entertainment churned out by a humongous corporation that would literally grind you into the dust if it had the technology to convert that dust into a more reliable revenue stream. Trust me. It’s not worth it. When the technology’s there, money dust we will all be.

The Kotaku piece also examined how that contingent fit into the bigger picture of the industry:

Most people don’t give a shit about any of this! Most people just read about games they’re interested in, and play them without feeling a need to write the developer into their will. Most people aren’t aware the controversies exist, and wouldn’t care if someone tried to tell them. There is, however, a very, very large number that cares an unhealthy amount, and make our jobs much more exhausting, their parroted and always baseless accusations of corruption like tiresome gnats to endlessly waft away.

There’s a significant proportion of that number that go far further, and attempt to destroy the lives of anyone who they decide has crossed them—almost always women or minority writers. These mobs think they represent the audience, the masses, and it’s just yet another conspiratorial delusion amongst so many. And now, as they wrestle with the fact that CDPR deliberately kept any reviewing outlet from getting console code before release in order to hide what a dreadful state it’s in, as they try to rationalize this as either a good thing, or the fault of someone else, their anger will grow and their lashing out will continue to seek exactly the wrong targets. But as they do, the vast majority of games players will never hear a single thing about it. And most readers will be glad of the reviews that warn them of the potential issues.

In summary: ‘Gamers’ got mad because reviewers pointed out the flaws in Cyberpunk 2077. Gamers then played Cyberpunk 2077 and got mad that it has flaws. You can’t write this sh*t.

Anon is a gamer from r/greentext

But as I said at the start: No-one comes out of this looking great.

CD Projekt Red should have been more upfront about the state of the game at release, and they certainly shouldn’t have crunched their staff. In an industry plagued by the latter, and filled with expensive games that get released half-finished and only become playable with months of patches, the nature of Cyberpunk 2077’s release has not helped. Of course this isn’t to put the blame on individual programmers or designers. Those are the very same hard-working, passionate people who find themselves getting crunched to the point of losing faith in the industry and any sense of joy or fulfilment in their work. No, this is a management problem and a systemic issue, prevalent especially on the bigger budget end of the spectrum. The gaming industry is, after all, still an industry, and those who work in it are subject to the same capitalist exploitation as workers in any other. As yet another great piece in Kotaku explained when talking about The Last Of Us: Part 2 winning best game direction in a recent video game awards ceremony:

Let’s be clear: the existence of crunch indicates a failure in leadership. It’s up to game directors and producers to ensure workloads are being managed properly and goals are being met. If workers are being forced to crunch, explicitly or otherwise, it means the managers themselves have fallen short somewhere, either in straining the limits of their existing staff, fostering an environment where overtime is an implied (if unspoken) requirement, or both. And as ambitious as The Last of Us Part II director Neil Druckmann and his projects may be, “questionable experiments in the realm of pushing human limits” are not required to make a great game.

There are a lot of people who claim that CD Projekt Red promised the world with Cyberpunk 2077. That this would be a game like no other, with limitless possibility and unprecedented replay value, and they are upset that the finished product they delivered is so different to this promise. Frankly, I don’t see things this way. Yes, there are some features that have clearly been cut. And yes, it seems as if some of the hype around player choice and how it would affect narrative seems to have been unwarranted (I’m only about thirty hours into the game, however, so my own experience is limited on this). I’ve been following the development of the game for quite some time though, and it seems to me like the hype cannot be laid entirely at the feet of CD Projekt Red. Prior to the game’s release, forums were absolutely alight with speculation on things you would be able to do in the game, so much of it so obviously un-moored from reality and never even hinted at by any material released by the developer.

Again, this is not to absolve CD Projekt Red. They have plenty to take responsibility for here. But there is a significant disconnect between what the ‘gaming community’ are raging about, and what reasonable consumers have a right to air grievances about. It must also be repeated that the loud and vocal minority of ‘gamers’ who pitch themselves as ‘true fans’, and who disguise their parasocial relationships and abusive behaviour behind ‘passion’, are a blight on the gaming landscape. Both of these things can be true at the same time, and the dizzy roller coaster that has been the development and release of Cyberpunk 2077 has been a stark reminder that if we are to keep enjoying this otherwise wonderful hobby, the games companies need to do better, and the fans need to be better.

← Mitch McConnell Is The Grinch In New 'Full Frontal' (And In Real Life) | Spoilers: 'The Flight Attendant' Sticks the Landing, Books a Season 2 Takeoff →