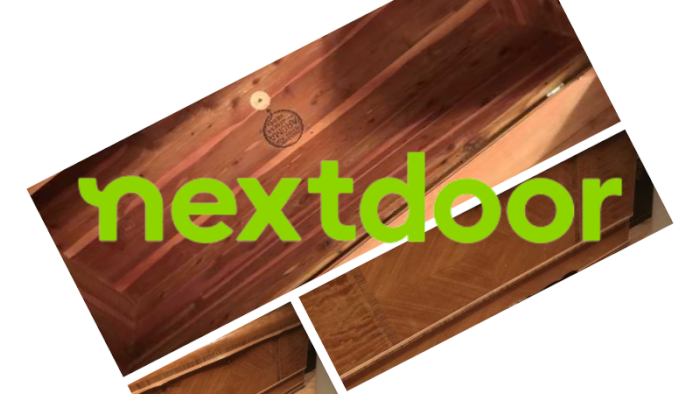 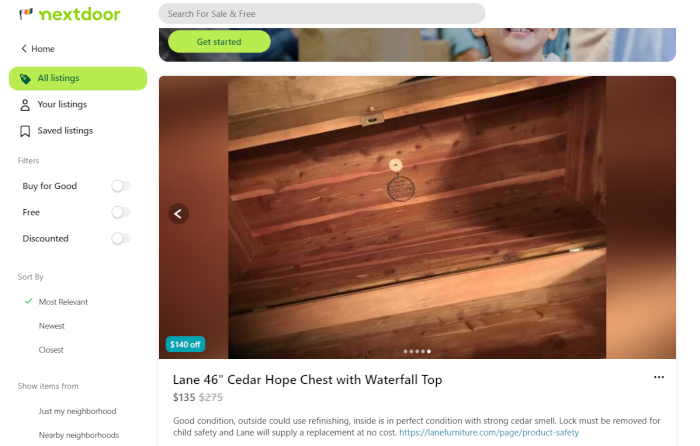 I like you already. Let me just say that first. I like what you got cookin’. It’s a little bit out of touch and a whole lot of naivete but I miss the pre-Blakian me who thought things were worth what they used to be worth, and so I envy you. You seem charming. And hopeful! So let’s start there.

Sadly, there’s no hope left in the madcap world of hope chests. I know. As a starving writer, I’m always game for a side hustle and a few years ago I noticed that you could get hope chests for dirt cheap - and not any hope chests, Lane hope chests. The grande dame of the hope chest world. Yeah, people were giving them away. Chests in perfect condition, cedar on the inside, you name it. I got them for like 20 bucks and sometimes for free and I figured I’d just Pledge the everliving shit out of them up and flip them to a needy hope chest home.

Except nobody wants hope chests anymore.

I noticed that other people were trying to paint them to gussy them up for sale and that didn’t do shit either. They couldn’t move them. Not on Craigslist or Ebay or Mercari local. No one wanted them, even when they had a nice chalk paint and a fake filigree. Luckily, four of the five that I had acquired were pillow tops. They generally look like something like what you’d find at your grandma’s house 30 years ago. 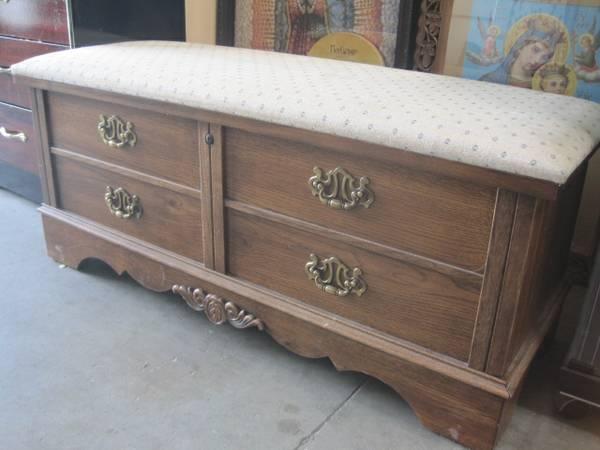 I bought some flags and reupholstered them, and only then was I able to sell them, but I only made about two hundred dollars total and it was too time-consuming. 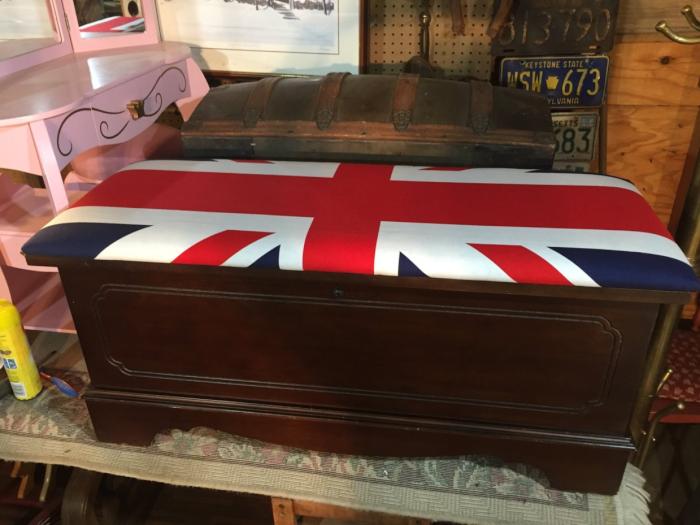 Once they were out of my possession, I departed the hope-chest-flipping bidness for good, never to return.

Because no one wants hope chests anymore.

Specifically, no one needs hope chests anymore because not only are we collectively out of hope, but we’re out of the random shit people used to store in hope chests like afghans and…um…afghans. Actually, what do you store in a hope chest?

Ahhhhhh. I see! Heirlooms! Sweet. Cool cool cool cool cool. What’s an heirloom again? Is that like if I’m a grand duke or something? Because I just used duct tape to stem a water leak so… yeah. Fresh out of ‘heirlooms.’

It says here you can also store a dowry! That’s useful! Remind me what a dowry is again? Is that like when you’re from another country and the groom’s father throws in a few extra sheep to sweeten the deal of arranged-marriaging you to his boring son? Awesome! I’ll bet American millennials — all 72.19 million of them — are straight poppin’ with dowries.

I’m sorry to pour cold water on your listing. I’m sorry that I initially laughed and then felt sorry for you because maybe you were counting on that money. Like, “Shooooot, if all else fails, we got that nice hope chest we can make a few bucks on!” 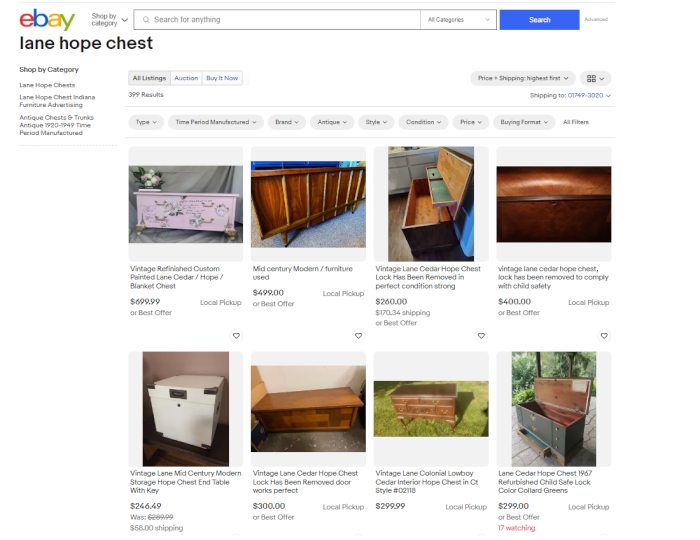 Except these have been listed for months and months and they never sell.

Why? Why, you might ask, are hope chests so out of vogue? Well, because once upon a time, they used to be on wedding registries. Table settings, glassware, a Kitchen Aid mixer, and a hope chest. 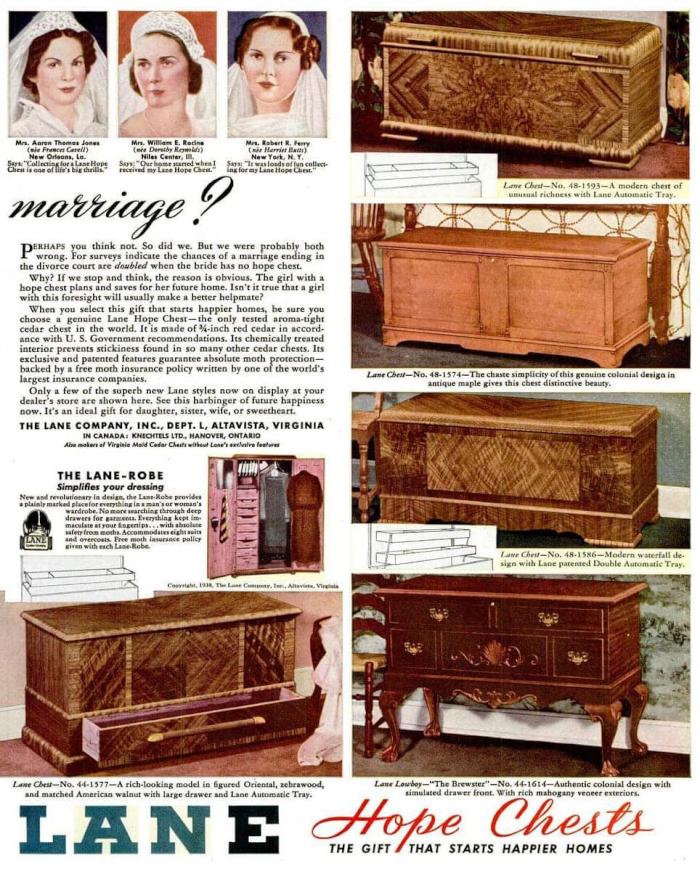 Now they aren’t. But it shouldn’t matter that much, right? People are always starved for storage and hope chests can double as seats! What’s not to love?

Well, kids used to die in them. They’d hop inside and the top would latch and the poor babies would be stuck. It makes me physically ill to think about. So that’s less than ideal. I joke about almost everything, but I can’t joke about that because it’s my worst nightmare as a parent, and also I’m still a little raw from Tanya’s situation in the White Lotus finale.

For the hope chests I flipped, I had to order new lock assemblies from Lane (which they provide for free), specific to the model of chest, and then wait six weeks for them to arrive before installing them. I wasn’t about to funnel a deathtrap back into circulation, but it’s an additional hassle.

Hope chests also weigh a ton. But wait, isn’t cedar light? Yes, it is, but these chests are all particleboard with a tiny, 1/16” film of cedar over them. I know this because last month I found one more unsold Lane hope chest tucked away in my barn and I couldn’t even give it away for free, and when I broke it apart to get rid of it, I took a few pictures. 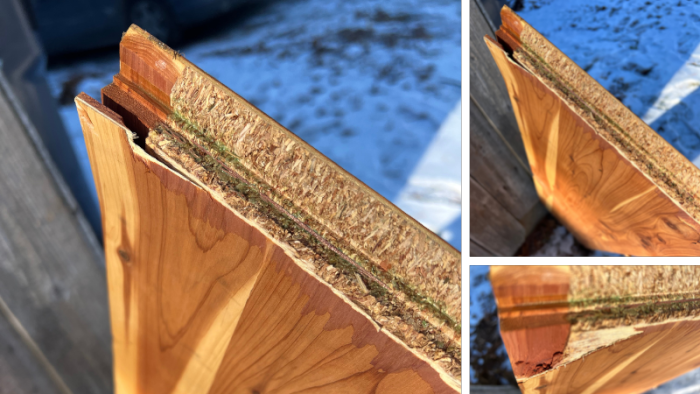 Particleboard makes it heavy and thus, difficult to move for one person.

And to what end? To use as a toy chest for your kids? With all those sharp corners and the possibility of the lid slamming down on their fingers? 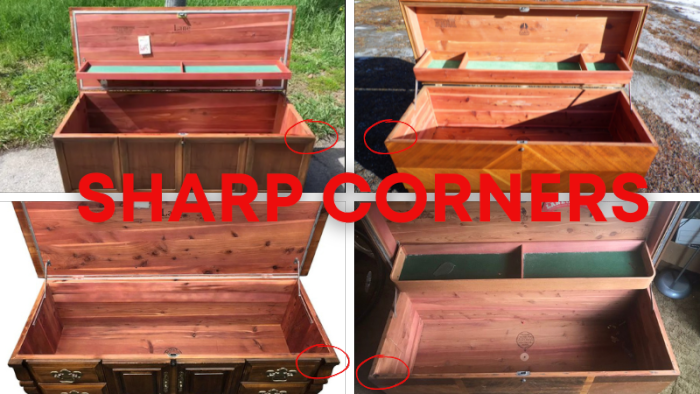 Yes, they have hinged stops on some of them, but no thanks. Even with the new locks, most parents are hesitant to risk it. People tend to use linen closets for blanket storage, so what good is a hope chest? Maybe a mud room or entryway? A place for teenagers to store their sneakers instead of kicking them off in the direct middle of the front door area?

In my experience, that never works either, because you tell them to put their shoes into the hope chest, but they never do. So you grumble and you do it for them, berating yourself for being such a pushover all these years. Who raised these animals?

Then, invariably, things get stacked on top of the hope chest while the sneakers are in it. Packages. Coats. Backpacks. Sports gear. And then you have to move all of that stuff to get to the sneakers. Kids don’t find the ideal alternative location for things like that, they just sweep it off onto the floor like ’80s desk sex, grab their sneakers and go. So, ultimately, trying to use a hope chest in your mud room ends up temporarily removing the shoes from the walking lanes, but you end up with everything else on the floor anyway.

Then you have to hire Lou Ferrigno to help you move the thing out of your mud room.

But who am I to pass judgment on your listing? Who knows? Maybe you have a nice hope chest. I see that in the last week you’ve discounted the hope chest by more than half, shaving off $140 and now you’re just doing a fire sale for the low, low price of $135. Surely it’s a steal at twice the price!

Let me put my limited hope-chest knowledge at your disposal. Maybe yours is one of a kind or something. Let’s take a look at that vaunted ‘Waterfall Top!” 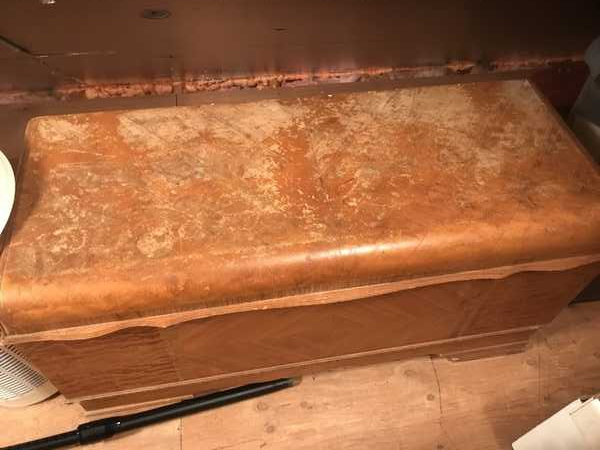 Oh, honey. Was it…in a waterfall?

Sorry to be the messenger of this hard lesson. I took it on the chin with hope chests, too. Because while there are a lot of things in the world where hope springs eternal, old-school, cedar-lined chests are not currently one of them.

Stay warm and have a happy holiday season!