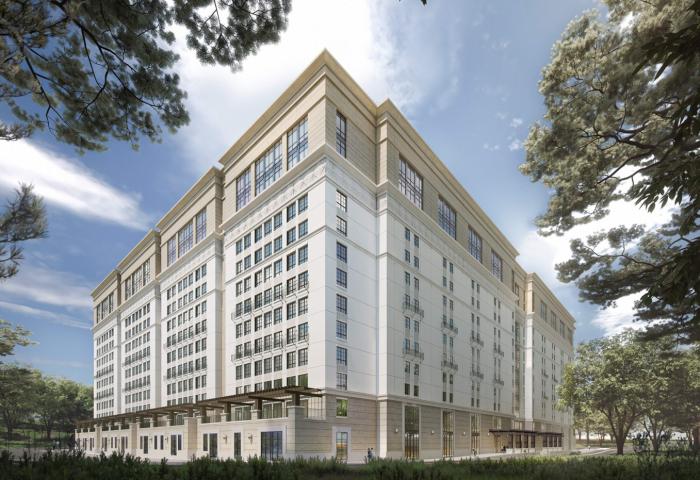 Is This Giga Dorm Room Planned by UC Santa Barbara and a Billionaire a Vision of the Future?

What’s up fellow Architecture Lovers? It’s your boy Alberto here bringing you a new architectural disaster, and just like the last time with 432 Park Avenue, in Manhattan, Billionaires are to blame. But if last time we were dealing with a skinny, brittle tower, this time we overcorrect with a thicc boi: UC Santa Barbara’s oversized proposal for Munger Hall, an 11 story tall dormitory residency that will house up to 4,500 students.

Ok, opening this like a lifestyle YouTuber was cringe-y enough, but please allow me a few more turbo-dorky jokes, please? So, Hmmm, UCSB… like, do you even know what negative space is? Hey guys! Stalinist Soviet Union called, they asked for their Socialist Realist style back.

But the rendering from the outside doesn’t do this thing justice, nor do they account for the sequence of policies and piss-poor decisions that led to it being greenlit after a few years of turnaround. The entire background of this building is something that only the hackiest writers could come up with, if they were commissioned to write a metaphor about class inequality and the erosion of public education.

Meet Charles Munger, the namesake and key financier of Munger Hall … and something else. Ninety-seven years old, right-hand man to Warren Buffett and vice chairman of Berkshire Hathaway, with a fortune in between $1.5 to $2 billion dollars. As with way too many entries for billionaires from shady families in Wikipedia, I technically have to describe him as a philanthropist by way of the hundreds of millions he has donated to universities, earmarking them to build dormitories.

This in and of itself is actually a way more useful donation to a Uni than buying a sixth ballet hall or their third indoor pool, except that Munger’s donations have always come with a condition sine qua non. Very much like myself, Munger is a frustrated architect, an aficionado that now has all the time and money in the world to dedicate himself to this passion. But instead of, say, investing the final years of his life going back to college, or just paying architecture professors from the best universities in the world to prepare him a personalized course of study, he cut out all the frills and middlemen, learned how to use AutoCAD and decided he himself would design the buildings he funded, and if these grubby Unies wanted his much-needed cash, then they would have to follow his instructions to the letter of the law. The letter! It just so happens that Munger has some very particular ideas on how to navigate the use of space.

As this article from Slate explains, Munger’s Faustian bargain was offered to a University system absolutely desperate to fil in financial gaps, critically and deliberately underfunded, as with any other Public system in the USA that does something other than send twenty-something cyborgs into third world countries to defend liberty. Like all other public institutions in the USA, the Universities he donated to bend over backwards to please the billionaire’s ego. After all, they are all competing for the same pool of students who are more interested in doing High-School but without parents or curfews than in studying.

Munger has done this donate-design pact with several Universities and a prep-school, his biggest contribution to date being a dorm-room for the University of Michigan. It shares one common trait with UCSB’s Munger: The bedrooms don’t have windows. Only common spaces in a perimeter that encircles the apartments … I can’t describe it and do it justice, look at the floor plans yourself:

The floor plans on this are absolutely insane. pic.twitter.com/rMn0QR51Eu

Rooms within rooms within rooms, like the fractal for a prison, because yes, the tiniest of the rectangles are the rooms and bathrooms proper. And since we are talking about prisons, well:

According to UCSB's own presentation, each Munger Hall bedroom will be 7x10 feet, clustered like this. For giggle I looked up the average size of a solitary confinement cell and y'all, wouldn't you believe it but pic.twitter.com/GHDlYyMCwM

Should I restate the point: It’s 4,500 students stored inside a gigantic, block-sized structure, 156,000 square meters in total. With no windows. Apparently, all bedrooms will have these sun-lights, because there’s nothing more Californian than coming up with an unnecessarily high-tech solution to an ethical problem. Munger is donating only $200 million of the $1.5 billion dollars this thing will cost, which… how? That’s what a new skyscraper in Manhattan goes for these days, including the value of the parcel and air rights. And do not f—king dare blame unionized contractors because I’m pretty sure you can’t enter a building site in NYC these days without a union card.

UC Santa Barbara’s executive board, pressured by a housing crunch that has forced them to house students in hotel rooms, simply rubber-stamped this thing and fast-tracked it post-pandemic after a few years of delays. This led to the very public resignation of one of the consulting architects who tore the thing to shreds in a “leaked” letter, basically calling it a sick experiment that will destroy the spirits of the students. I can’t stop wondering if that was the plan all along, a large-scale experiment on how humans deal with enclosed spaces without sunlight, but with some basic amenities. Is this a sign of something?

There is a counterpoint. Apparently, Munger’s dorm-rooms have become very popular and appreciated by many students with individualized bathrooms, rooms and large common spaces. If we are to believe semi-anonymous reviews, that is. Some have also made the point that no windows might be an acceptable trade-off to having to sleep in bunk-beds as an adult … with roommates doing the things adults do:

The room on the left how the modal on-campus UC student is living, I refuse to believe that the room on the right is some kind of human rights violation because it has a false window. pic.twitter.com/NLIYfZE8XY

But if there was a case to be made, the pandemic just stomped over it, as students in Munger’s buildings had to isolate in their rooms for weeks. While being locked inside might make no difference in Michigan, nobody decides to spend years of their lives in Santa Barbara, of all places, to remain indoors. UCSB also forgot a very important issue.

while UCSB is trending thanks to munger hall, let’s draw attention to the fact that the entire 46-page planning document only mentions accessibility ONCE in context of ADA ramps being placed at the entrances of the building

Oh, that as well. No, I’m referring to the fact this thing only has two entrances. Did I mention Charles Munger is from Nebraska? Because clearly, he was thinking of a flat, frozen wasteland when designing this instead of an earthquake zone. Perhaps they’ll add a few more exit doors to comply with codes. Though I’m not sure they noticed that this thing is the proverbial barrel for a shooter.

In Chile, dorm rooms are barely a thing. Students from other places rent rooms in residential apartments or stay with relatives, and the vast majority live at home, our cities being compact. I ask my fellow Pajiba colleagues about their experiences with the added bonus that so many of them teach or work for Universities. Their conclusions: 1) If you thought sleep schedules in regular dorms were bad, 2) Architects seem to forget they were students once and don’t show their work, ignoring basic facts about the location’s weather, 3) or they simply stack them up in towers with tiny windows, 4) Crowded dorm-rooms are also a thing in Atlanta, according to Claude, though they couldn’t have more space available to build (even in the Downtown), 5) the stench inside this thing could be listed as a chemical weapon. Also, Kayleigh was reminded of the architect from The Fountainhead and that gave me an idea to solve UCSB’s dilemma: take out insurance against terrorist acts for the building, make major modifications to the blueprints, piss off Munger so he blows it up, collect the insurance money and build something better.

Or they could just rent one of the many unused cruise ships. They have the facilities for it and every room would have actual windows.