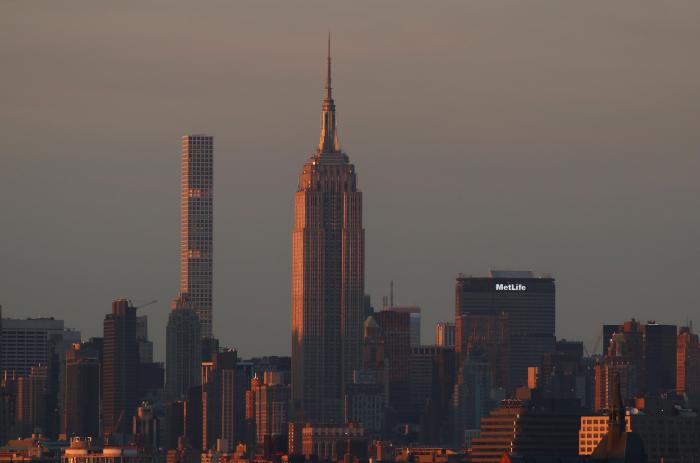 Have you heard about 432 Park Avenue in New York City? That super-skinny, 400-meter tall luxury condo that looks like what a child would draw over a picture of Manhattan’s skyline?

Turns out that the building, six years after its grand opening, is a complete disaster, and the owners are suing the developer for hundreds of millions of dollars. According to these articles by the New York Times, the building has been suffering from multiple instances of flooding and leaks, electrical explosions, multiple instances of people being trapped in the elevators, and… try to guess, don’t click on the links. What do you think could be the most unsettling thing to happen if you’re inside a superthin, supertall building?

The thing sways too much in the wind. This also makes a hell of a lot of noise. Consider that the Empire State Building already sways a couple of inches with strong winds and that one has the classical “wedding cake” shape.

You might be wondering by now just how serious these structural issues are? On the one hand, you can’t build something like this without some growing pains. On the other, we are talking about apartments for billionaires here, or very close to that, just look at the prices of these… actually pretty classy things at Zillowporn! I mean, they probably only hired the most renowned architects and engineers to take care of the maths, right?

Well, the first thing you need to know is that you should never, ever, ever, ever underestimate the capacity of famous architects to mess up in the most colossal way you don’t want to imagine. Moreover, the architect behind this thing happens to be the same one behind a London skyscraper that turned into a literal death ray. Twice. Though he is not one for self-pitying, he admitted shortly after the building’s opening that major mistakes were made… and then he quickly recanted, probably pressured by the financiers. Whatever the case, let’s just have fun at the super-rich experiencing … well, what most New Yorkers have to face in their already overpriced, poorly maintained, and salary-draining apartments.

432 Park Avenue is the most obnoxious building in all of Manhattan and this story warmed my heart. https://t.co/fzKGq0qbhZ

Since many of the links above are either paywalled or “limited-articles-per-month”-walled, here’s Stefanos Chen’s, the reporter covering all the fun, breaking it down on Twitter:

The latest in the 432 Park saga: The condo board is suing the developers for $125M for construction issues like flooding damage, electrical explosions and hours-long elevator rides. Will thread some 👀 parts https://t.co/XDVJLMQlDL

We first revealed many of these issues in February. The resident board obv didn't want to publicize these issues, but 8 months later, they apparently reached a breaking point with the developers. Here's original piece: https://t.co/OLdAwzzelo

A lot of what's in the suit echoes what we reported in Feb, but there are some new ones, like this electrical explosion (apparently 2nd in 3 yrs) that cost the building $1.5M in June pic.twitter.com/TLxkhzCitG

The suit also gets personal, calling out high-level members of the development team by name. Here, the board claims that a member of the team who owns in the building complained of "intolerable" noise in bad weather, purportedly bc of construction defects pic.twitter.com/m27RqPBkKV

In Feb, I confirmed with the FDNY one incident in which a resident got stuck in an elevator (on Halloween '19) for an hour and 25 min. Board says it wasn't the only time pic.twitter.com/RciGpV41sE

The board also threw shade at the design of the building, which they note received a D rating on energy efficiency pic.twitter.com/cudU7KQYD7

Not great for resales. Out of 125 units (~103, if u don't count staff apts), 11 are listed for sale, from ~$7M to $169M. Only one sale has publicly closed since Jan, and it was this one, linked to a missing Chinese biz magnate -props to @trdny @oriondjones https://t.co/oNOgVbeK1e

And leave it to Zoomers to actually raise the bar of the conversation, because this building has a teenage Tik Tok hater. A TEENAGE TIK TOK HATER.

I’m probably going to post about 432 park sporadically as I find out more things about it!! (as I am 100% sure more things will come out about it)

It’s almost as if the architect was trying to pull a sick prank on billionaire douchebags. But Rafael Viñoly is not a class comrade my friends; he’s just another star architect embroiled in the ultimate W for his kind. As Ted Mosby once said: Leaving your mark on NYC’s skyline. Chicks dig that apparently. All these new superthin-supertall buildings popping up in Manhattan are obviously the result of developers trying to cash in on this extreme stage of wealth inequality, confident they can make a massive return on their investment even if there build more luxury units than there are billionaires, and they won’t mind doing it in just the teensiest bit of space left on that island. They are, according to this essay, another financial instrument, that way private equity has of reversing productive cycles and turning the tangible and valuable into an idea of money.

That’s to be expected. The problem is star architects jumping on the opportunity to have their egos seen, in the shape of yet another bland, uninspiring glass shard. And as Steven Holl mentions in the essay linked above, pre-New Deal skyscrapers at least created public spaces, or at the very least, they were memorable (#bringbackArtDeco). Have these architects even considered what will happen to these buildings a hundred years from now? What about repurposing them?, no way you can turn them into affordable housing the way they are set up.

I’m not just worried about their social impact. It would appear none of these architects were ever trained in the basics of earthquake-proofing buildings. Granted, NYC is not on a fault zone, but it is on a hurricane zone. The kind that are becoming more and more common. Again, remember what almost happened to the Citigroup Building back in the ’70s? It could’ve toppled over like a domino. 432 Park is 425 meters tall. You know what’s within 400 meters of it? MoMA. And also the former guy’s tower. We could only be so lucky.

← Kyrsten Sinema Is the Worst | Netflix Releases New Data on Most Popular Titles, But It's Still an Opaque Mess →