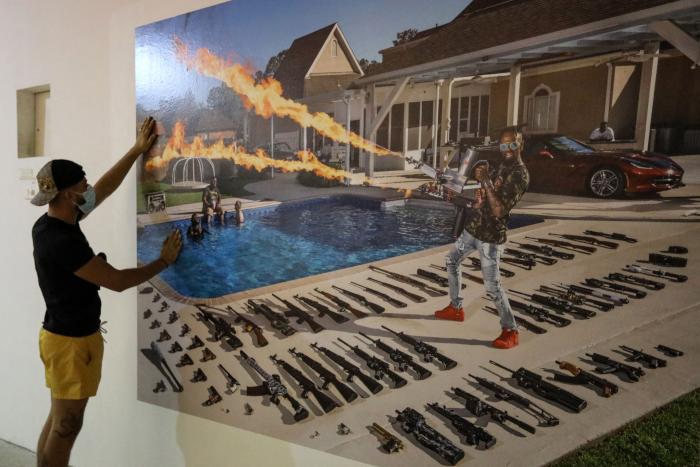 Gabriele Galimberti Portrays the Emptiness of US Gun Culture in The Ameriguns.

There is a style in digital photography I love and, for lack of a better word, I would call “staged naturalism.” It’s the kind of photography where slices of life or everyday settings are captured using resources from studio photography, without trading away either the “realness” nor the aesthetic, resulting in something that is both documentarian but also artificial. It can be used to explore the beauty of subjects that are never really given much thought, whether underrepresented minorities, mundane spaces or campy objects. But it also can be used to portray certain types of alienations, in a way that underscores their absurdity.

Gabriele Galimberti is an Italian photographer, currently working at National Geographic, who has made a career in this… style? Genre? Aesthetic? He has traveled the world photographing everything from children’s toy collections, kitchen spaces and culture, couchsurfing communities or small shops in Italy, usually arranging the possessions of his subjects around them, not unlike the pieces on a model aircraft, but with the things that make up their identities.

He recently won 2021’s World Press Photo Contest in the Portraits category with The Ameriguns, a collection and book in which he photographed that 3% or so of Americans who own more than 17 guns a piece. And no, they are not well-curated collections of 1800’s six-shooters, World War I Mausers or heirlooms. These people accumulate guns for that hazy “just in case” that makes up for 50% of the GOP’s platform. They invest thousands of dollars yearly or even monthly in customization, gear, accessories and, of course, mountains of bullets. Most of these people are clearly well-off, but I’m sure there’s a bunch that went into debt to purchase a tenth rifle, that Daniel Defense they’ve had the hots for since they saw Sicario: Day of the Soldado.

The Twitter nitpicker part of me wants to ponder whether these pictures are tailored for those of us outside the US, with our morbid fascination at the cult of death in the States. I also wanted to write about how portraying ammosexuals in a sort of “reverse-exoticization” masks the danger they pose. You can’t build any kind of collective project, such as a nation, with people that build their sense of self around fucking guns.

And that’s where Galimberti succeeds. These people pose proudly and eagerly with their guns, which reminds me of this Pew Research about gun ownership in the USA, which showed how a third of GOPers consider guns a very important part of their identity. That was back in the distant year of 2017. The pictures fittingly convey the emptiness of their subjects. Emptiness compounded with fear and violence.

I cannot stop thinking of the bucketloads money they have spent just on the guns and accessories. Which is why I started researching the “I-can’t-believe-these-are-legal” trading marketplaces online to see exactly how much these things cost. I desisted after being bombarded with ads for boner pills and Kenneth Copeland seminars. Also, I discovered there is such a thing as fake suppressors. I will embed the pictures from Galimberti’s and World Press Photo’s Instagram accounts, while calculating the cost of their arsenals, assuming $350 for each handgun, $625 for each hunting rifle or shotgun and $1,250 for the assault rifles or submachine guns, considering they are all decked out with aftermarket sights, picatinny rails and other shit. Then, I want you to picture what they could’ve done with the same amount of money. Not just College funds or Home Improvement. Think travels, investments, etc.

You can find full-resolution versions here or buy the book at your local independent bookseller. And if you are an ammosexual and you want to “well actually” on how I categorize guns, you can write me at [email protected]


← Quite Simply the Most Epic Troll Job I Have Ever Seen | Review: Alison Pill Shines in the Deeply Literary Family Drama 'All My Puny Sorrows' →