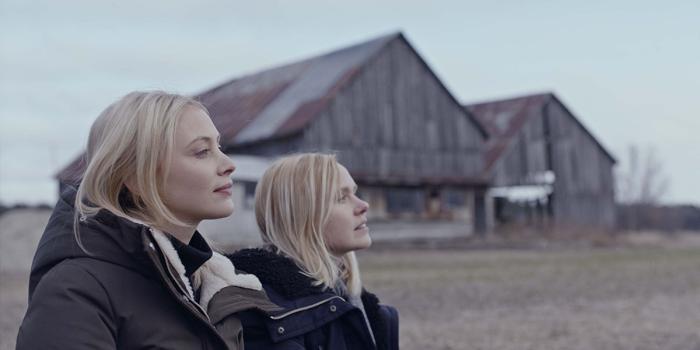 Yoli Von Reisen (Alison Pill) is a frustrated writer putting off signing her divorce papers as she struggles to finish another book she expects won’t sell. Her messy peace is disturbed when she receives a phone call informing her that her prodigal musician sister Elf (Sarah Gadon) has tried to kill herself. Yoli returns to her hometown just outside Winnipeg to care for Elf. She wants to help Elf get better, but Elf says she doesn’t want to, and that she wants Yoli to take her to Switzerland so she can die on her own terms. The experience brings back painful memories of their childhoods in a strict Mennonite community, one where their father also died by suicide.

Canadian author Miriam Toews has frequently written about life in the Mennonite community, a denomination of Christianity probably best known to the world for the subset of believers who live in colonies separate from the modern world. Having grown up in the faith, she is keenly aware of the seeming contradictions and complications that define it, both in its own ecosystem and to outside spectators. Almost all of her novels touch upon Mennonite life in some form, with one of her newest books, the masterful Women Talking, currently being adapted by Sarah Polley. Based on her 2014 novel of the same name, which was shortlisted for basically every major literary prize in Canada, All My Puny Sorrows is especially rooted in her past. The protagonist is a writer, and Toews’s own sister died by suicide in 2010. This makes writer-director Michael McGowan’s job especially tough.

The film’s literary origins are evident from the get-go, thanks to Pill’s narration, which mostly comes from Yoli’s novel-in-progress. As she draws from her real life, past and present, we see sporadic glimpses of their upbringing and their loving but conflicted father, played by Donal Logue. The tension between free-spirited parenting and the conservative demands of Mennonite elders proves to be an impossible quandary for him. Those ripples impact both sisters in the modern day, and Yoli’s occasional narrative reminders strengthen the ties to her youth.

Yoli and Elf have a kind of semi-estranged squabbling sibling chemistry, full of passive-aggressive banter but evident love amid the jokes. Yoli’s the screw-up and Elf is the seemingly perfect child with oppressive depression. Pill and Sarah Gadon are, of course, excellent, with both women once again reminding audiences that they’re underrated to near-sinful degrees by mainstream cinema (an honor they also share with Mare Winningham, who plays their mother with the straight back of someone all too used to having to hold it together for the outside world.) As Yoli, Pill has some real meat to chew on, something that’s been denied to her in less-than-glorious projects like Them. As an actress, she’s always possessed a wise-beyond-her-years quality, but here, she’s at her most weighed down by that duty. Yoli talks like a writer, speaking in practiced quips and always playing the role of the frustrated intellectual. She’s used to making jokes to alleviate the tension, her pain and restlessness evident in the ways that Pill moves like someone with knots in their shoulders.

Gadon is fragile but with an inner steel that plays in sharp contrast to Pill’s sardonic weariness. Elf is intelligent, witty, and knows every trick in her family’s book. We see how she’s grown immune to the emotional bombardment and oft-callous questioning of Yoli, and how she looks back clear-eyed, the gaze of someone who doesn’t plan to stick around for long. The sisters have sharp conversations, crack jokes, and are forced to acknowledge the irreconcilable nature of their conundrum: Yoli wants her sister to live, but Elf plans to die as soon as possible.

The actors have a great handle over this hefty and highly literary dialogue, ripped straight from the pages of Toews’s book. The director clearly loves the source material and seems hesitant to cut even a single world. That’s evident in a couple of the more clunky scenes, such as a moment where a harried Yoli comes up with increasingly nonsense schemes to distract Elf. This mannered form of speaking, which feels more primed for theatre than film, may prove off-putting to some. It’s so obviously untethered to realism that the conversations, as prickly and oft provocative as they are, might seem too twee to cynics. The nuts-and-bolts technical aspects of the film add to this possible image of All My Puny Sorrows as Yet Another Sad Indie Drama, right down to the plinky piano-heavy score and slow-motion shots.

For me, however, it mostly works. This is a film of ideas as much as one of character, and the central question is a tough one: How do we truly detangle the stigma around suicide? Elf describes her depression as a terminal illness. Her mother rejects the idea that her daughter should be ‘forgiven’ for her choice, a contrast to her former faith. Yoli often speaks with a startling lack of empathy about her sister’s plight, unable or perhaps unwilling to understand the mindset that it takes to choose death over life. it’s dense stuff that doesn’t open its arms welcomingly, but there’s a sharp necessity to what’s at stake. There’s something to be said for how McGowan has refused to sand down the pricklier edges of this book, even if it does make the final film not as well-rounded as it could have been.

All My Puny Sorrows was screened as part of the 2021 TIFF film festival. It does not currently have a release date.

← Gabriele Galimberti Portrays the Emptiness of US Gun Culture in The Ameriguns. | 'American Crime Story: Impeachment': Bill Clinton Is a Total Sleazebucket →