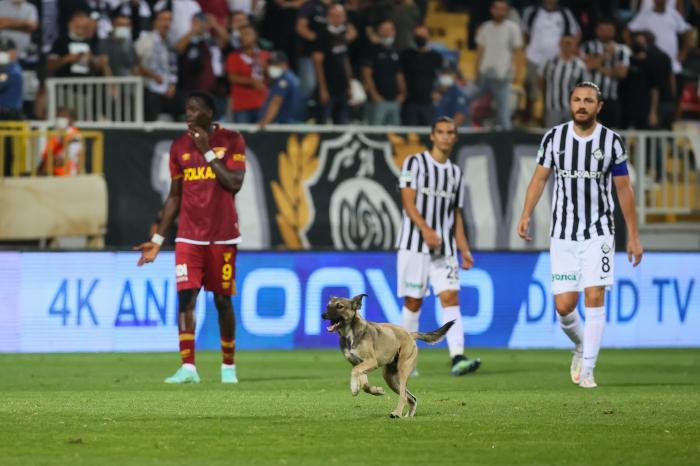 There's Too Much Going On And It's Also Monday, So Here's Some Dogs Stopping Football Matches

If you think this is is a shameless traffic-grab, you wouldn’t be that far off. It partly is, because my birthday is right around the corner and I’m definitely treating myself to a 1,500-word essay on future demographics. And. I. Need. To. Justify. That. To. The Overlords. But also, I think you and I have been checking one too many videos we shouldn’t have clicked on, one too many counts of equipment losses, and way too long looking at a map where certain areas turn colors, something we should only do every four years. And on top of that, it’s Monday.

That’s why we need dogs. We need very good boys and girls, even when they’re being naughty. In a world where mental health isn’t considered a human right and isn’t widely available, they are the fragile thread on which we keep a modicum of sanity. And yeah, sure cats are also great and I guess human children are OK, but they can’t compare to creatures that are always happy to see you.

I’ve written before about how Latin American football stadiums are the kind of place where normal things don’t happen too often, a perennial chaos that we take in stride a little too much.

But there is one thing that happens in professional Latin American football (and in other developing countries, the banner photo is from the Turkish Super Lig) that will always be endearing, is always a joy to watch, and something that I wouldn’t want to see disappear from our courts if we somehow manage to crack the whole “becoming a developed country” thing: Stray dogs gleefully invading the pitch and having the time of their lives.

And yes, this is yet another symptom of our Continent-wide problem with street dogs, but like … can we not do this now?

It’s surprising it doesn’t happen with every other match: You have thousands of people, a building with dozens of entrances, the security apparatus has bigger stuff to deal with, and in the middle of it all, a bunch of guys playing with a ball. From the point of view of a doggo, it must be paradise. Plus, there are all the carts frying stadium foods.

This compendium was collected by @so_ferrari_CARP (current user name: JuanaFernanda Quintera +), so please go give her a like and RT if you enjoyed this.

Most of these puppos have the same SOP: Strut gainly into the grass, dance around the players, and as they surround them going for the catch, drop on your back and ask for belly scratches. It’s shameless, I think some of them know they’re interrupting a major event, and they just can’t wipe the smile off their faces. Basically, they operate in the same way as a streaker.

Most of them allow themselves to be picked and carried in arms outside of the court. Again, shameless.

And of course, when there’s a ball, there’s a play:

This is a good time to remind you that in football the clock keeps on ticking whenever there are stoppages. This good Spaniel probably added 4 minutes of extra game time taking the players out for a spin:

A cynical person would say that the players and courtside staff go soft on these invaders because they don’t want to look like assholes in front of TV cameras. The reality is any self-respecting Latin American considers dogs to be sacred:

THAT PLAYER CLEARLY FLOPPED, THIS GOOD BOY IS BEING FRAMED:

But then you start to suspect these guys might have an agenda doing this. As it is well known, Football comes before Catholicism in Latin America, so when you see a mutt invading the pitch and taking a dump in front of the homeside goal line, you can’t shake the feeling that these chonkers are also observant:

Reminder, courtside security are people who are mentally prepared to contain hundreds of fans, whether they are angry or calm, baton and shield in hand. But they are completely stumped when a four-legged furball starts doing zoomies over their field of work:

They are doing a very good job being good boys and girls, they won’t be denied:

An important reminder that this collection included matches from all sorts of tiers. They also take part of National Team matches, like this one in a Chile vs Argentina, a few days ago: 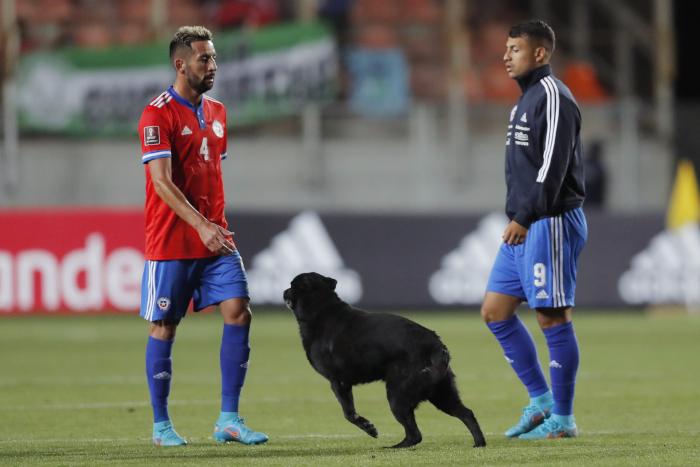 There are times when they simply can’t stop them, can distract them, and can’t catch them, the dog is simply too fast and agile. This is funny because football is a game predicated on catching up with people who are very fast and very agile. This king decided to bring a little bit of reverse bullfighting to a Copa Sudamericana playoffs match. They resumed only after he left, of his own volition.

This Turkish Good King somehow managed to come back after being gently placed behind the courtside fence:

Don’t forget that football is a dynamic game where plays are always in flux, but precisely because of this, they can collapse very easily. Now, a dog can disrupt a play just because of the distraction, imagine what would happen if one “showed up” near the goal line. Like this one that blocked what would’ve been a perfect “goalkeeper went too far inside” goal.

Notice that the chiron in the video claims this is not the first time it happened during that season.

Anytime soon, we’re gonna find ourselves in an Airbud situation, on the legality of non-human players. I am quite sure our continent’s football federations are planning for this coming… HA, I can’t even say that part with a straight face!