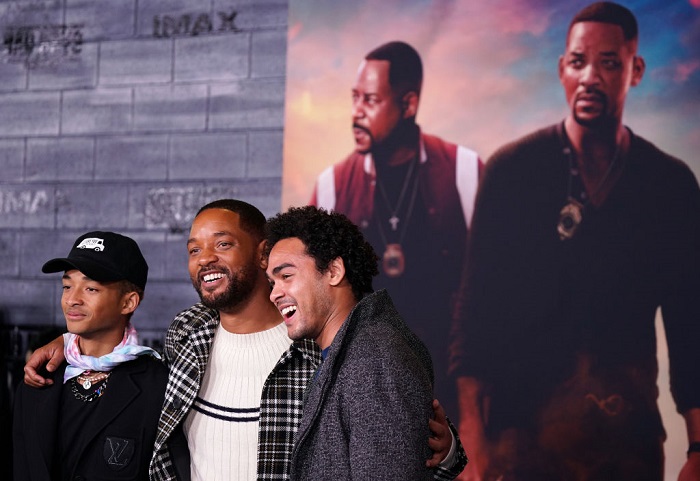 With 'Gemini Man,' 'Spies in Disguise,' and 'Bad Boys For Life,' Will Smith Stops Fighting the Future and Makes Room for It

Will Smith is, despite a recent series of diminishing box office returns and lackluster critical reactions for projects like Concussion, Winter’s Tale, Collateral Beauty, and After Earth, one of our last A-List movie stars. Smith’s name gets projects made: He was the draw of Netflix’s Bright, a major get as Deadshot for Suicide Squad (at least, until that project rapidly careened into reboot status, now with James Gunn at the helm), and provided so much family-friendly name recognition to the live-action Aladdin that the rest of the cast could be populated with lesser-known brown actors. And with his three most recent films—Gemini Man, Spies in Disguise, and Bad Boys For Life—Smith has done something very interesting with his acting career: Perform fatherhood in a way that accepts the future and his inevitable replacement, instead of fighting against it.

Those three films weren’t universally successful. Although they’ve all made back their budgets with international takes, domestic amounts for Gemini Man and Spies in Disguise in particular were lackluster. Gemini Man was, to put it kindly, a flop, a film boasting cutting-edge technological advancements that basically no theaters in the United States could accommodate. Ang Lee’s film cost $138 million but made only $48.5 million in the U.S. and Canada. Spies in Disguise, an animated caper with the voices of Smith, Tom Holland, and Ben Mendelsohn, also somewhat underperformed during the holiday season, bringing in $59.7 million in the U.S. and Canada on a $100 million budget. And the outlier here is Bad Boys For Life, the third installment of a 25-year-old trilogy that smashed box office expectations this past week and has already recouped the $90 million it cost to make. With a 76% Tomatometer score and an A CinemaScore, you can probably expect BB4L to have solid legs at the box office.

Conceptually, these are all different films in different genres with different intentions — but what unites them is Smith as a reluctant-but-relinquishing father figure, a man realizing that his legacy will include more than just whatever he accomplishes alone. In a meta way, this feels like Smith acknowledging to us, the audience, that he knows his A-List status will one day be irrelevant — and that he’s gracious enough to move over to make room for the next crop of stars before his time runs out. Is that potentially a very generous read? Sure! But consider that Smith has been performing his personal fatherhood for a very long time, casting son Jaden in projects The Pursuit of Happyness and After Earth. Unlike other A-listers who cling to their leading-man status in a way that doesn’t accommodate space for other actors (looking at you, Mark Wahlberg), Smith with his latest string of projects has stepped fully into America’s Dad mode, not only sharing the spotlight but accepting that other actors can bring to projects what he might not be able to.

First up is Gemini Man, a sci-fi thriller that languished in development hell for 20 years before David Benioff helped revamp the script (yikes) and Smith signed on. The movie suffers through wild tonal shifts and underuses its supporting cast of Mary Elizabeth Winstead, Benedict Wong, and Clive Owen, but the draw here is two Will Smiths; to that end, this film is the most experimental for my theory. Throughout Gemini Man, secret government assassin Henry Brogan (Smith) is followed by another killer who is more efficient, more ruthless, more willing to use a motorcycle to beat him up.

Henry isn’t sure he can hang with this guy, and the movie treats it like a major reveal when Junior ends up being Henry’s clone, crafted by baddie Clay Varris (Owen). Henry grew too much of a conscience—and grew too old—to keep up with Clay’s demands, so he stole some of his DNA and grew Junior, stepping in as the boy’s father. Consider the name of Clay’s company: GEMINI. Like twins! Like Henry and Junior! Like the name of the movie! Did you get it? I will end my sarcasm to say that what I actually think Gemini Man does pretty well is use Henry, as the elder man here, to communicate his regret and pain to a younger version of himself, and to literally veer away from a path he shouldn’t have taken to begin with. Henry is great at killing people, but his advancing years make him realize his job didn’t really accomplish that much; the world is still a bad place, despite however many bad people he took out with his sniper rifle. And so what Smith does with the performances of both Henry and Junior is capture men at different stages of their life, but with an overlap of identity. His Henry is wary, tired, aghast at what Clay has done; his younger Junior is noticeably stilted, his juvenile awkwardness in contrast to his ruthless physicality. The once-reclusive Henry steps into a role of fatherhood for Junior after Clay’s death; Junior, leaving behind his training, enrolls in college. Henry accepts the responsibility that his former choices helped create, and Junior realizes that he was built for is not necessarily who he is. With Gemini Man, Smith makes a statement about his own status as an elder statesman in Hollywood—and about a younger generation literally following in his footsteps.

Similarly minded is Spies in Disguise, which was very goofy and actually enjoyable and I’m a little surprised it got lost in the holiday shuffle. Smith voices the handsome, suave, and internationally famous spy Lance Sterling, who is ostensibly a secret agent but is recognized everywhere he goes. His coworkers swoon; his boss gives him a lot of leeway; and he’s used to working alone and getting whatever he wants.

That changes when Lance meets research wunderkind Walter Beckett (Holland), an outcast in their workplace not only for his zany personality but his wacky tech designs, including a bomb that explodes glitter and kitten holograms. Lance is disgusted by Walter—by his inexperience, by his naivete, by his hope for a better world—and is convinced that his own violent, take-no-prisoners methods are the best. You can probably assume, because this is a children’s movie, that Lance—after being turned into a pigeon, the titular “spy in disguise,” by Walter—eventually softens to Walter’s viewpoint, but what I appreciated about Spies in Disguise is that, like Gemini Man, it ensures that we as viewers and Smith’s characters in the films understand how these younger counterparts are skilled, unique, and qualified in their own ways. Their intelligence is just as valid as Smith’s Henry or Lance; their methodologies just as strategic. So when Walter shows that his invention of sticky pink goop to capture criminals in their tracks works, or that his bubble safety vest to save people from drowning or falling works, or that his absurd glitter-kitten bomb to distract bad guys and turn their negative feelings into happy ones works—it’s also showing Lance a different way. And Lance, in turn, steps into Walter’s life as both a father-like protector for the younger man and a respectful colleague, aware of the validity and creativity of his coworker’s ideas. Once again, the elder Smith character acknowledges that his way is not the only way, and of course that leads us into Bad Boys For Life, a movie whose entire narrative arc relies on a singularly minded Smith being put in his place.

Throughout the Bad Boys franchise, Smith’s Mike Lowreyyyy (my homage to how Martin Lawrence positively drawls out the character’s last name) has been the epitome of cool. He’s tall, he’s hot, his wardrobe is immaculate, his apartment is amazing, he’s shockingly wealthy, he’s committed to the job, he’s an irredeemable ladies man. In the first Bad Boys, he briefly stepped into the role of father and provider when he and Lawrence’s Marcus Burnett had to switch identities during an investigation, but for the most part, Lowrey is a man alone. All of that changes in Bad Boys For Life, when Lowrey has fallen a step behind. Compared with young police officers Dorn (Alexander Ludwig), Kelly (Vanessa Hudgens), and Rafe (Charles Melton), Lowrey just doesn’t quite have it. As specialized members of the AMMO task force, Dorn is a highly skilled hacker, Kelly is a great markswoman, and Rafe is just exceptionally hot, and also, he can pilot a drone. Mike’s barge-in-first, ask-questions-later modus operandi isn’t that sophisticated—or skilled—anymore. And against the bad guys, including assassin Armando (Jacob Scipio), Mike falters, too. After being shot four times by Armando, Mike takes months to recuperate; later on, when the two fight it out on an apartment balcony, Armando’s superior fighting style—and parkour!—give him the upper hand. Those interactions with Armando fuel Mike’s obsessive desire for revenge, but also slowly transform him into a man willing to accept more partners and collaborators than only Marcus, who made a promise to God to be less violent if Mike recovered. (That promise actually lasts longer during the movie than you would think, but of course, not for its entirety.)

Mike’s begrudging partnership with AMMO allows him to see the benefits of their tactics, and his realization that Armando is his son forces the onetime womanizer to realize that he holds responsibilities outside of his own life. Their final face-off, then, is less about Mike being one-upped by someone younger, stronger, and faster, but Mike reckoning with his own mortality—and his own eventual replacement. In a final Fast and the Furious-like move, Mike works to accept and redeem Armando, offering him a chance to make amends for his misdeeds. He accepts not only fatherhood, but the reality that he holds some sway in the kind of man Armando could choose to be. Much like Henry and Junior, Mike and Armando are two men at different locations in the same path, wondering how they got to where they are, and where they’ll eventually go.

It’s not that unique, in Hollywood, to make a movie about growing older; I mentioned in my review of Bad Boys For Life that a similar question about finding meaning in advancing years is pondered by Quentin Tarantino’s Once Upon a Time … in Hollywood. But for the most part, actors in the latter stage of their careers—especially those known for action, as Smith is—aren’t really portraying characters who change that much. Liam Neeson has been playing the same “revenge for my wronged family” dude since Taken. Sylvester Stallone is lovely in the Creed franchise, but his Rocky character isn’t so much altered by Adonis as fulfilled by his success so many years after father Apollo’s death. I love the aforementioned Fast and the Furious franchise, but Vin Diesel’s Dominic Toretto is mostly the same guy he always was, sipping on Coronas and preaching about family, even 19 years into this series.

What Smith has done with his career compared with so many of his peers feels atypical because it is — the Fresh Prince fully accepting the unique power being on the A-List provides, not as a gatekeeper blocking the rise of Hollywood’s up-and-comers, but an elder statesman ushering them in alongside him. Smith had to defeat himself in Gemini Man, take on a protégé in Spies in Disguise, and become a father in Bad Boys For Life to prove it to us — and we’ll see him probably perform this role again in King Richard, the upcoming biopic of Venus and Serena Williams, in which Smith plays father Richard. My hopes are high for that one, and for The Council, in which Smith will play Harlem mob boss Nicky Barnes. For Bright 2? Not so much.