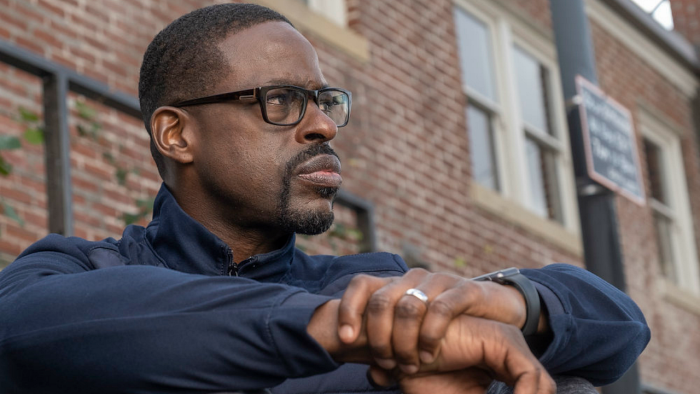 This week’s This Is Us returned again to Randall’s mental wellbeing in what is expected to be the first of three episodes devoted to Randall’s challenges following a home burglary. It doesn’t make for particularly compelling television, but it does ensure that Sterling K. Brown gets another Emmy nomination, and I am not mad at that (particularly after his, ahem, sterling turn on the third season of Mrs. Maisel). As it turns out, not only does Randall suffer from panic attacks, but during times of intense stress and fear, he also can’t sleep, which only heightens and exacerbates his emotional fears (I suspect all of that is connected to the panic attacks).

The trigger this time around is the burglar who broke into his home at the end of last week’s episode. No harm comes to Randall or his family — Randall throws some money on the counter, and the burglar takes it and runs — but the incident gets into Randall’s head. He becomes preoccupied with the burglary. He installs a security system. He sets up cameras in his home. He is obsessed with watching what’s on those cameras through his smart phone. He doesn’t sleep. He can barely carry on a conversation. He bungles a city councilor meeting. In the meantime, we also see Randall-specific flashbacks concerning his nightmares and other problems sleeping, both as a kid (when Jack didn’t have the patience for it), and again in his college dorms, when he sought the comfort of Beth.

Eventually, it comes to a head in the present when Randall is trying to clear his head while on a run. He crosses paths with a purse snatcher and beats the hell out of him. As a city councilor, it makes Randall a hero. But emotionally, it’s too much for Randall to handle. When his staff applauds him on the way into the office and asks him, “What’s it feel like to be a hero?” Randall walks out of his office, goes home, and breaks down. He calls his brother Kevin because he needs to talk to someone, although what he really needs is a professional, as Omar Epps’ Darnell tried to tell him earlier in the episode.

That therapist will likely come, and I expect it’ll be Pamela Adlon, who has been cast in the third season (I love Adlon, and she also has a very Loraine Bracco in The Sopranos thing going that suits her to the role).

In either respect, when Randall calls Kevin, we discover that he is in bed with a blonde woman, after having gone back home to attend the funeral of Sophie’s mom. The Next On clip — and the fact that Alexandra Breckenridge’s return for season 4 has been announced — strongly suggests that it is indeed Sophie with whom he ends up in bed. (Side note: Did you know that Alexandra Breckenridge stars in a Netflix series, Virgin River, and that it has been picked up for a second season? Because I didn’t).

It seems fairly obvious that it’s Sophie in bed with Kevin, but this is This Is Us, so I would not rule out a fake-out. As in, Kevin and Sophie talk again after the funeral and come to the conclusion (again) that they are not meant for each other, and Kevin ends up going home with a different blonde person from his past. Or he does sleep with Sophie, and they break it off immediately thereafter? The midseason finale was meant to set up a longer mystery, and it’s only been two episodes, so it may be too early to make the reveal that it’s Sophie that Kevin is engaged to on his 40th birthday.

← When Is 'Jeopardy' Leaving Netflix? What's Leaving Netflix in February 2020? | Will Smith's Late Career Turn Shifts Him from Fresh Prince to America's Dad →