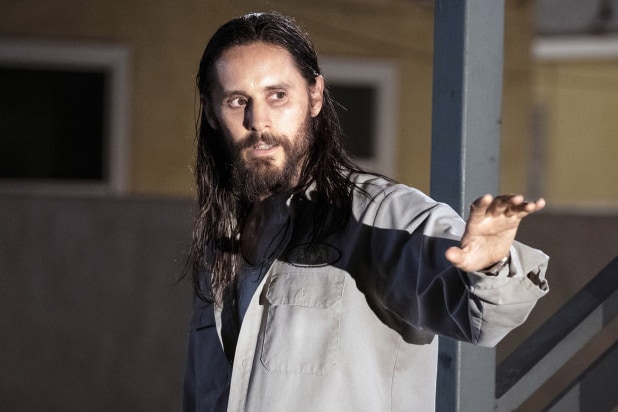 Jared Leto — who was inexplicably nominated as Best Supporting Actor for his turn as a wayward Juggalo in The Little Things by both the Golden Globes and the Screen Actors Guild this year — was thankfully shut out by the Oscars this morning, which chose not to nominate Leto for prancing around like the spokesperson for the dark side of Mountain Dew. Personally, I thought that Leto — whose performance was like that of Hot Topic Hannibal Lector if he was also the lead singer of Skynrd — was the best thing about Denzel’s The Little Things, which is a bit like saying that a runny nose is the best part of a head cold.

I will give Leto this much, however: He is the master of the 50-yard stare, and no one does deadeyes better than Jared. You can look as deep as you want into those shapely orbs and see nothing — it’s a bottomless reservoir of emptiness. However, it’s obvious what the Golden Globes saw in his performance: He nailed the whole bowlegged Keyser Soze thing, which is obviously important for the role because 90 percent of his screen time was him walking around the neighborhood while being espied from a windshield, while the other ten percent was channeling a serial-killing sloth whose expressions trailed that of a normal person by three-quarters of a second.

It was not a great performance, and the Academy voters thankfully recognized as much. No one was more thankful than all of Twitter, which expected to be disappointed by another Leto nomination this morning.

It's an honor just for Jared Leto not to be nominated

Jared Leto not taking the news of his Oscar snub well. pic.twitter.com/1xIE5CrwWP

Oh no, Jared 'Oscar Bait' Leto missed out on a nomination. What a shame pic.twitter.com/tUOhhtB8ay

Just realised that Jared Leto didn’t get an Oscar nomination and I’m so happy about this. The best thing to happen from this year’s nominations

Jared Leto didn’t get an Oscar nomination for the little things pic.twitter.com/Q5cFkIjodH


← 'The Talk' Taken Off the Air Following Accusations of Racism Against Sharon Osbourne | Box Office Report: 'Raya and the Last Dragon' Stays on Top →