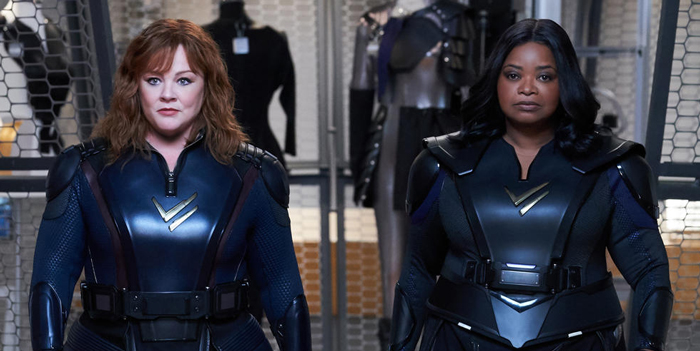 Whether you’re looking for espionage thrills, superhero slapstick, daring documentaries, or untamed comedy, we’ve got you covered in our latest trailer round-up.

News of the World: Now available On Demand.

Want a look behind the scenes of Paul Greengrass’s Western, which starred Tom Hanks at his Hanksiest? Sure you do!

My Beautiful Stutter: Premiering exclusively on discovery+ on March 11.

Those who stutter face stigmatization and bullying that can push kids to the brink. This documentary follows five children, ages 9 to 18, who participate in the interactive arts-based program, The Stuttering Association for the Young, and shows how their lives change because of it.

The Fallout: Premiering at the 2021 SXSW Film Festival on March 17.

Jenna Ortega and Maddie Ziegler star in the directorial debut of actress Megan Park, which boasts an original score by Finneas. Per its logline, this drama centers on three teenagers, who “form a unique and dynamic bond as they navigate the never linear, often confusing journey to heal in a world that feels forever changed.”

The documentarian behind Fyre points his lens at the scandal that brought down Felicity Huffman and Lori Loughlin.

Slaxx: Coming to Shudder on March 18.

ATTACK OF THE KILLER PANTS! We’ve teased the tantalizing terror and dark comedy of this indie horror offering back when it played Fantasia 2020. Now, you can see its weirdness and wonders for yourself.

Revisit VHS aesthetic and midnight comedy with this 1998-set mockumentary about Donny Drucker’s big day, where sex, drugs, and family disfunction collide. In a bold move, this trailer boasts all the fests that turned the movie down.

Seaspiracy: Coming to Netflix on March 24.

Documentarian Ali Tabrizi explores the oceans, and how mankind is ruining them.

Senior Moment: Coming to theaters and On Demand March 26.

William Shatner, Jean Smart, and Christopher Lloyd team up for a kooky comedy that begins with a senior citizen losing his license…then finding love.

Michael B. Jordan and Jodie Turner-Smith star in an espionage thriller about murder, conspiracy, and more.

15 Things You Didn’t Know About Bigfoot: Coming to theaters and VOD on May 7.

Millennial culture and cryptid conspiracies collide in this mockumentary about a vlogger in search of the truth about sasquatch.

The Woman In The Window: Coming to Netflix on May 14.

THE WOMAN IN THE WINDOW

← Like CBS All Access, Paramount+ Is Still Too Little Bang for the Buck | A 'Party Down' Revival is In the Works →