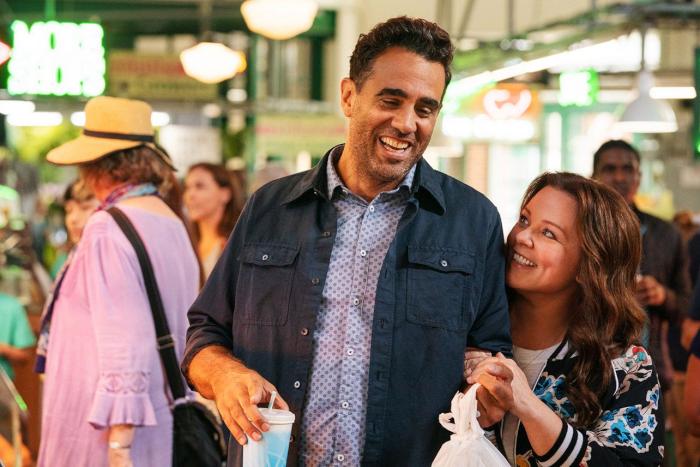 'Superintelligence' Review: Melissa McCarthy and Ben Falcone Are Lovely People Who Are Really Bad at Movies

Over the course of the pandemic, we have introduced all the MCU movies to our eight-year-old twins, who enjoyed the hell out of them. However, beyond a few moments in Iron Man 3, never really felt a lot of tension while watching them. It’s superhero action violence, which doesn’t stress them out.

After watching the MCU movies, however, I began to introduce to them a few low-stakes rom-coms like Sweet Home Alabama and 13 Going on 30. It turns out that emotional tension is much, much more stressful for them. Characters who are not superheroes and who are confronted by awkward or tense situations really gets to them. For instance, during that scene where Jennifer Garner walks out on the dance floor by herself and starts the Thriller dance in 13 Going on 30, one of the twins begged us to turn the film off and eventually had to leave the room because they were having a panic attack. It was like we were watching The Exorcist. They could not handle it.

I mention this because I watched HBO Max’s new Melissa McCarthy thriller-comedy Superintelligence (rated PG) with the twins this weekend, and they never once freaked out or felt any stress or asked me to turn off the TV. That’s not actually a compliment. It mostly demonstrates how dramatically inert the film is. It’s a pleasant enough nap-time diversion, thanks mostly to the likability of Melissa McCarthy. It is, however, yet another disappointment for the husband and wife team of McCarthy and Ben Falcone, who also co-wrote Tammy, Life of the Party, and The Boss, which — like Superintelligence — were all directed by Falcone. Also, like Superintelligence, they were all bad movies, but amiably bad! I don’t hate them, but I like McCarthy and Falcone so much that I wish they were good. Or even marginally better than bad. Alas, they are not.

Superintelligence combines the de-fanged, broad comedy stylings of Falcone and McCarthy with the grating James Corden, who provides the voice of a computer chip inside of a children’s toy that gains superintelligence and decides to save the world or to destroy it. The superintelligent AI decides to base that decision on the actions of Carol (McCarthy) because it’s not really that intelligent, is it?

Carol is a sort of everywoman; she has almost no defining characteristics other than being played by McCarthy. When the AI asks her what she would do if she knew the world would be ending in three days, her first thought is to make good with her ex-boyfriend, George (Bobby Cannavale), with whom she had a falling out. The AI decides to help her by, for instance, dropping $10 million into her bank account, naming her the director of a nonprofit with $2 billion to spend, buying her a Tesla, and a new apartment, and also orchestrating a run-in with George in the supermarket.

In the meantime, Carol’s best friend, Dennis (Brian Tyree Henry), who is aware of the AI, informs the FBI, which runs it up the flag to the President (Jean Smart), who doesn’t understand technology. Running parallel to Carol’s romantic interactions with George is a separate storyline where the President and her advisors try to neutralize the AI before it ends the world by, uh, turning the power off across the globe.

Neither storyline is particularly good, although the one involving Carol and George at least has the charm of McCarthy and Cannavale going for it, and while their romantic chemistry is not all that believable, their comedic chemistry is, owing to what is obviously a good friendship (Cannavale also worked on Spy and will work again with McCarthy on Nine Perfect Strangers). I’d love to watch a movie where Cannavale and McCarthy just hang out; I’m less inclined to watch one where that hang-out is scripted by Falcone, particularly one where McCarthy is constrained in her ability to adlib by a PG rating.

Still, it’s not the worst way to spend 90 minutes (and the cast is more likable than most of the characters in that other Thanksgiving streaming release), but it’s not actually a good use of one’s time, either. There are much better options, even in a pandemic where decent new movies are running dry (including that other Thanksgiving streamer). Unless you are watching movies with someone who is averse to dramatic tension, you can sit this one out.